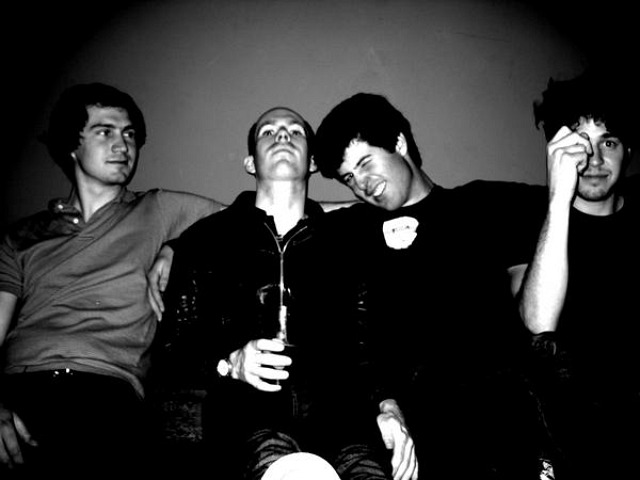 The Soft Pack is officially screwed. Originally named, The Muslims, this hot garage band from San Diego (recently located to LA) , caught about the same amount of attention for their name as for their music. Eventually it got to the point where the band thought it would be better if they just changed it to the Soft Pack. As guitarist Matty McLaughlin explains, "We were sick of the shit people would say about the old name. I guess they were trying to be funny and some things that were said came off as racist… It just became fucking stupid." So they changed it, and were rewarded with a torrent of disapproval like a city under siege. Fans accused them of being lily-livered sissies and not sticking to their guns. Damned if they did, damned if they didn't.

Whatever their name, they rock, hard, so we'll ignore all this nonsense about names and labels and whatnot, and focus instead on their music. We had a chat with McLoughlin about The Soft Pack's sophomore album, which they just finished recording in Brooklyn a few weeks ago. Here is some of what was said.

The Soft Pack - Call It A Day

How old were you when you started playing guitar?
I was around thirteen when I started playing. I picked it up because I was really into Nirvana and stuff like that. It seemed like it would be really easy to play.

When did you and Matt Lamkin (lead singer) start playing together?
Well, I went to school out east, but at Christmas breaks we would always play guitar together and stuff. We were friends in high school, and when I moved back to San Diego permanently we decided to form a band.

Who is "Call It A Day" about? Was there a specific moment of frustration that lead to the writing of that song?
Well, Matt wrote that song, so I think he would answer you better, but I don't think it's about anyone specifically. It's more about general people who bother you and telling them to beat it.

Your recording this second album in Brooklyn I hear. Do you think the city is having an influence on the sound?
We actually just finished it a couple weeks ago. It's getting mixed now. 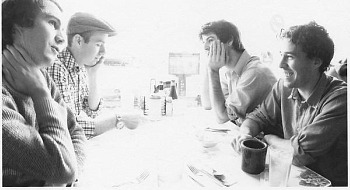 You recorded your first disk with just you and Matt. Now you've got a bassist and a drummer to call your own. Is it more fun recording with four people?
Oh yeah! It sounds much more exciting. We played all of the songs live on the album, all together. On the first one we would do the guitar and then the vocals and then the bass and just overdub everything. But doing everything together just sounds a little tougher.

What song are you most proud of on the album?
"Pull Out" is one of my favorite songs. We all switch instruments on that track. Everyone is playing something we're not used to playing. It's weird when we were recording it two weeks ago I was kind of sick of it. You know, after playing the same song over and over you just don't know if it was good or not, but I listened to it the other day, and it's awesome.

So, I may not be that bright, but I don't understand your video for "Extinction" at all. Where's the rest of the band? Why is it just Matt?
(laughs) It's not that deep. We made that video before Brian and David joined the band. We really didn't have a solid lineup, and so Matt just came up with the idea for the video and did it all himself. I just didn't want to wake up to do it. I slept through the whole thing.

Was there a moment when you realized that David and Brian were the final members of the band?
Yeah, no there was. They made us an infinitely better band. We just sounded better. Brian is by far the best drummer in San Diego. He was a bunch of bands, but eventually we convinced him to join ours. And we went to high school with Dave. One day our other bassist couldn't play a show, so we asked Dave to play, and he just took that guy's spot. He was so good.

Poor guy. Are you letting Dave and Brian in on the writing process? Or is it still just you and Matt?
Oh it's a collaborative thing now. The band really came together right after our first album came out and we all went on tour. We had to learn how to write with each other on that tour. It took a little while to figure it out while jamming and stuff, but everyone kind of contributes now. Someone will bring a riff or a baseline and we'll build a song off of it. It's not just me and Matt anymore. Besides new people make you better. You write cooler stuff than you thought you were capable of doing. I mean seriously, Matt and I are limited in our ability musicians.

What are you going to call the new album?
We're trying to figure out artwork right now, but the best name we've got so far is Alcopop, which is what the British call wine coolers. It's an okay name, but we'll probably come up with something better.

The Soft Pack, 'Extinction' from Russ Finkelstein on Vimeo.

What is the weirdest thing you ever saw in the audience?
I don't look up that often. I'm usually just focusing on the guitar. I don't think anything that weird has happened. Maybe we should start recruiting a weirder fan base.

If you could change one thing about the music industry what would it be?
I don't know what's going on. I really don't. We had all of this hype from CMJ last year which was cool, but then it goes away. I really like our record label, Kemado Records. They've been fine to us. I like watching the major labels fall apart. I'm excited to see what happens. Nobody knows what the fuck is going on, and that's really exciting.

Do you have any strange promoter stories?
We used to get ripped off all the time before we had a booking agent. We got paid cigarettes and four dollars in Oakland once. I don't know. We're about to start our first headlining tour ever, so maybe we'll get fucked now that we're on our own.

That is exciting. Did you pick the bands you're taking with you on tour?
Oh no, our label did that. It's going to be a grab bag. I think we're playing with the Smith Westerns, who I hear are really good. I'm super excited to see, who we're playing with.
We're nice, so hopefully it'll work out.

Do you have a favorite local band at the moment?
I like Pearl Harbor a lot. There are a lot of local bands that I like, but they're my favorite ones. They've got this weird dreamy pop thing going on.

If you were booking a show in Heaven and and a show in Hell, who would you have headline?
Something really exciting...Oh I know, James Brown as a young man in Heaven. He would be great. I don't want to hang out in Hell. Hell's hot. Hell's like Riverside. I think I'd book Jesus Lizard. I think they'd be really good show, actually. I think they'd do really well in Hell. Maybe I'd even go.

Well, thanks for talking with us.
Thank you.

Be sure to check out The Soft Pack tonight at the Greek Theater with Phoenix and Metric. Doors are at 7:30pm. Tickets are $35.

Want to know what the Soft Pack is listening to? Here's their list of best albums of 2008.