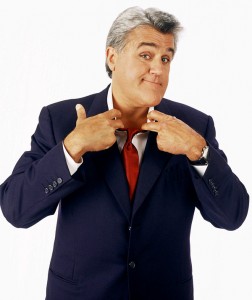 "The Jay Leno Show" premieres at 10pm on NBC
We were at the MTV Video Music Awards last night (video to be posted shortly) and we realized that we just haven't been devoting enough of our time to watching the network in order to have even the slightest idea who any of those people were. It seemed like half of them could be Kardashians but most were reality show "stars" of everything from "Nitro Circus" to "Real World: Cancun". At any rate, this year's New York City-based VMAs were the most watched since 2002 and up 21% from last year, something we will attribute to our presence there, you're welcome, MTV. Here's the full list of winners. It was a bizarre experience, we look forward to next year.
—-
Tonight's the night that "The Jay Leno Show" debuts on NBC @ 10pm. Even though we wrote about this months ago, we're seeing other writers note that by cutting out 5 hours of scripted programming a week, NBC will be losing additional future revenue from syndicated re-runs and DVD sales/rentals as each episode of Leno's show will be worthless the minute after it airs. Everybody who thinks we needed another hour of talk shows, raise your hand. Will some people watch it? Definitely. Is it going to help NBC in the short term? Probably. Is it good for NBC in the medium to long term? IMHO: no.
—-
The Emmys are on Sunday and we'll be reporting to you live from there. In the meantime, you can check out countless hours of interviews with Emmy winners and other TV legends at EmmyTVLegends.org, we particularly liked the Sid Caesar and Fred Rogers interviews and will watch plenty more.

8:00pm Top Gear BBC America - Jeremy races a Bugatti Veyron against a plane from Alba, Italy to the top of London's NatWest Tower

8:00pm One Tree Hill The CW - Season Premiere. We had blissfully forgotten that this show existed.

10:00pm Machines of Malice Discovery - The uplifting way to start the week: Roman death machines which include the Human Press, the Crank Wheel and the Tree Tearer.