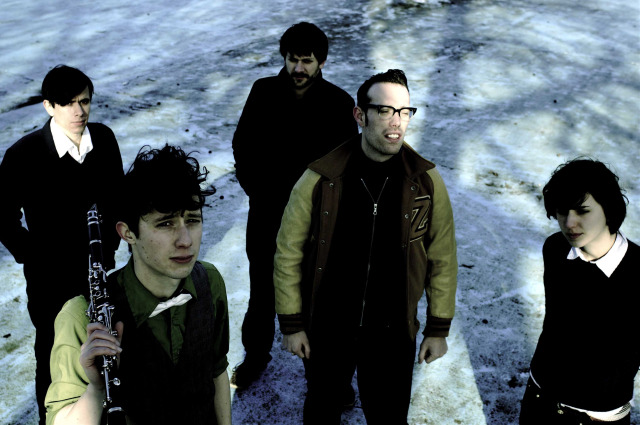 You know that giant, gaping hole in your heart where the new Arcade Fire album should be? Might I suggest filling some of it with Fanfarlo's debut disk Reservoirs. The British six piece outfit stuffs their tunes to the brim with horns, glockenspiels, chimes, violins, guitars, bass, drums, and Balthazar's lovely, haunting vocals. Lyrically the album is all about mysterious misfortunes inspired by ghosts, Howard Hughes, and UFOs, weaving stories that are as intricate as the melodies behind them. We chatted with Simon Balthazar last weekend about the new disk. Here is some of what was said.

How old were you when you first picked up an instrument?
I had a plastic drum kit when I was three or four, and I had probably noticed the piano in our house at that point as well. I guess neither of those I would have actually picked up though. Perhaps that came slightly later with either a ukulele or a glockenspiel.

Where did you get the name Fanfarlo?
Well I was looking for a name and I was reading a lot of French symbolists at the time, and happened upon a novella by Baudelaire called La Fanfarlo - which sort of stuck. We like how it is sort of language-ambiguous and sounds like fanfare.

What was the worst show you ever did?
Well our first show ever was at Nambucca in north London. It was an incredibly hot day and I remember the guy who was playing bass with me nearly fainted. My guitar kept going out of tune and it was hard to hold on to a pick. It was awful. Nambucca just burned down by the way. No relation, I swear. There was also this time where we were using my laptop for playing backing tracks. We wait for ever for this terrible support band who are running way over their set, then five minutes before the show the bassist (this is now a new bassist, it always seems to be the bassist) realizes he left my laptop in a pub. Panic ensues, but turns out someone had handed it in to the bar, but it doesn't matter, cause it breaks down after one song. So we muddle through a couple of songs and get off stage. 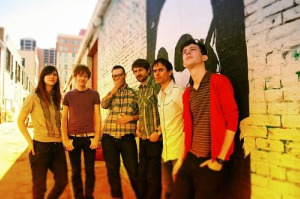 Why the album titled Reservoir? Does it speak to certain themes in the album?
It originally comes from a bunch of songs I wrote about reservoirs wanting to make a whole album on the theme. I used to have this obsession with lakes. In the end I think the only song that actually made the album was 'Ghosts', but the idea still kinda lingered so that's where the name comes from.

What is the weirdest thing you ever saw in the audience?
Well, I have probably seen weirder stuff, but this weekend we were in Amsterdam and played at a festival, and someone in the crowd was holding this dry, gray bit of palm tree which had certainly seen better days, and a sign which at a quick glance said something like "Shadow the hulk!". I think in actual fact it was something in Dutch about shade for sale but it was just a very ridiculous proposal altogether.

That is weird. If you could change one thing about the music industry what would it be?
I really wish it was less driven by cool and hype. It's very shortsighted.

Where did you guys write "Luna"?
Okay, this is going to sound cheesy but I had the idea for it in a restaurant and had to walk out and sing it into my Dictaphone. It underwent a lot of transformations at rehearsal though.

That's not cheesy. That's pretty great. Who is Harold T. Wilkins from your single " "Harold T. Wilkins, Or How To Wait For A Very Long Time"?
He was this guy who wrote about flying saucers. I just found one of his books lying around, not sure were it came from. It's a terrible book, completely incoherent, paranoid and full of cheap, half-baked conspiracies. But then I wrote a song about an outsider waiting to get picked up by UFOs and tagged his name to it as a sort of homage or something.

What song are you most proud of on this album?
"I'm A Pilot."

Is anyone in the band really a pilot?
Ah, no. The name kind of came first. Then I thought - who's a pilot? And thought about Howard Hughes, so the song is about certain aspects of his persona, specifically him going nuts, locking himself into a room recording endless tapes.

What is the best?
The best thing is that you don't have to worry about anything. It's a very focused and peaceful existence because you wake up in the morning knowing pretty much exactly what you have to do that day and what the goal is. Everything is planned out, and you don't need to pay the bills, do your dishes... all you have to do is play music, get drunk and meet people.

What album can you not live without?
Tom Wait's Frank's Wild Years.

Do you have a favorite local band at the moment?
My friend's bands Male Bonding and Lord Auch are good. And I'm pretty pleased to hear that Tap Tap have made a new album. I hope it's as good as the first one.

If you were stuck on a deserted island and you could bring three worldly possessions what would they be?
A piano, a pool table and an endless supply of peanut butter.

Peanut butter? Wouldn't you get thirsty?
Oh yeah, and maybe some water.

Well thanks for talking with us, Simon.
Thank you!

Be sure and catch Fanfarlo with The Love Language at the Troubadour on Tuesday, Sept 15th. Doors open at 8pm. Tickets are $12.