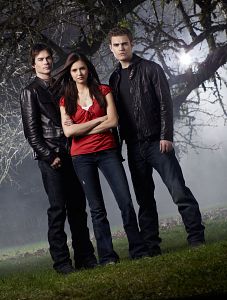 "The Vampire Diaries" premieres on The CW tonight, lord help us
So Ellen DeGeneres will be the new "4th" judge on "American Idol" and we think she'll do just fine - she's a professional and a consummate entertainer and, proving right wing conservatives wrong yet again, having lesbians on TV has not brought about the fall of western civilization. While we've read about the "outrage" over DeGeneres not being a singer or music producer, we still haven't seen much lamenting over what was the best reason to watch the show, the potential for a Paula Abdul trainwreck. While she rarely delivered, it was almost always worth the suspense.
—-
"Big Brother" kicks off another tonight but CBS is not kicking off the series and has instead ordered a 12th season (Tony Pierce rejoices).
—-
"The Vampire Diaries" has its season premiere on The CW and it seems a little too late, too teenagery, and too lame to even consider turning on (and lookit how white everyone is). We think that, someday, most folks will realize that Twilight was crap also - David Duchovny's Hank Moody in the upcoming season of "Californication" succinctly guts the genre and it's well worth watching when it premieres later this month.

Don't get us wrong, we love "True Blood" and since it's on HBO we get the cussing, nudity, and softcore pornography that we crave but vampirism has always been about sex and, if you read Bram Stoker, venereal disease. This milquetoast teenage garbage cuts out all the good stuff and is generally absurd. Not that "True Blood" isn't absurd either - hey, if vampires' hearts don't beat, then how the hell does Bill get a hard-on for Sookie?

10:00pm Tour of Missouri Versus - Stage 4 of cycling stage race