TV Junkie: 'Glee' Premieres; What are your VMA & Emmy Questions? 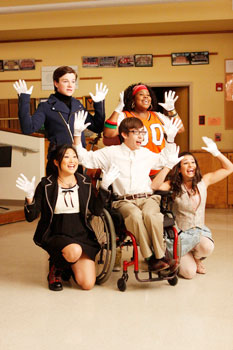 "Glee" premieres at 9pm on FOX
A reminder that we'll be reporting live from MTV's VMAs on Sunday. Also on the horizon will be our coverage of the Emmy's on September 20th. If you are as Emmy crazy as we are, you'll want to check out Variety's Emmy Central which has lists of the Daytime and Creative Arts Emmy winners among tons of articles and speculation - we'll have more news on this in the near future as well. What do you want us to ask on the red carpet of the Video Music Awards? What do you want us to ask the Primetime Emmy winners?
—-
Did anyone catch the "Sons of Anarchy" premiere last night? Too violent or is there even such a notion anymore? Tonight, at the other end of the spectrum, we have the "series" premiere of "Glee" which several readers have urged us to check out as well as the season premiere of "So You Think You Can Dance" because there must now be at least two dance-reality programs running. Don't miss LAist's interview with two of the choreographers of "SYTYCD" (flu strain?) which was posted earlier today!
—-
Hollywood lost a couple legends this last week: casting director Caro Jones who shaped who we saw on TV and film (from "Green Acres" to Rocky) for over four decades died on September 3rd at age 86; and yesterday Army Archerd died at 87, a longtime columnist for Variety where he wrote a column for 52 years (52 years!!), as well as being a pioneer in reporting on (most importantly) television and every aspect of producing entertainment in Hollywood. We will miss them both.

8:00pm So You Think You Can Dance FOX - Season Premiere

9:00pm Man vs. Wild Discovery - Bear Grylls goes to Alaska where he ice-hops onto a glacier; hangs by his fingertips over a waterfall and avoids getting crushed between an iceberg and his rescue vehicle.