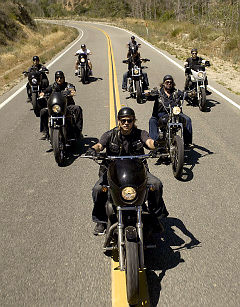 "Sons of Anarchy" season premiere on FX @ 10pm
There's been an unreasonable amount of hype regarding the re-launch of "Melrose Place" so we won't add more fuel to the fire because the best thing happening tonight is the season premiere of "Sons of Anarchy" on FX at 10pm. We had the chance to talk to series creator Kurt Sutter with his wife and series star Katey Sagal, at the TV Land Awards - be sure to watch the video at the end of this post.
—-
While we applauded the addition of a couple more female players to SNL, it has meant the departure of two: Michaela Watkins and Casey Wilson. We met Wilson right after she joined SNL a year and a half ago and she was very sweet and we always thought she was great on the show. Lucky for LA, she will be joining the Hollywood Upright Citizens Brigade on September 24. We hope to see them on TV again very soon.

8:00pm 10 Things I Hate About You ABC Family - Season Finale

8:00pm Swords: Life on the Line Discovery - Tempers flare aboard the Big Eye; stormy seas beat up the Eagle Eye II; a man is nearly sent overboard on the Sea Hawk.

8:00pm Hell's Kitchen FOX - When both teams are asked to make crepes, the winning team spends the afternoon at a French restaurant; some chefs struggle with French cuisine.

9:30pm P.O.V.: English Surgeon PBS/KCET - British neurosurgeon Henry Marsh has traveled to Ukraine for 15 years to care for patients who have been left to die.

10:00pm Tour of Missouri Versus - Cycling in the midwest with stars from around the world.

10:00pm Starz Inside: Comics on Screen Starz - The documentary explores how some of America's favorite stand up comedians jumped to successful movie careers. Those interviewed for the special include George Lopez, Andrew Dice Clay, Frank Caliendo, Judah Friedlander, and actor/director Harold Ramis.

10:00pm The Colony Discovery - A kidney stone puts Joey down for the count, and a new arrival surprises the colonists; Mike and Vlad go on a dangerous mission.