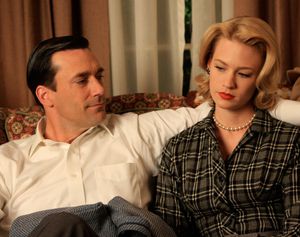 "Mad Men" gets another season - how do you like this season so far?
AMC's "Mad Men" has been picked up for another season (big surprise) - how are you enjoying what's happening so far this season?
—-
Martin Scorsese is heading to HBO as the network orders a pilot series of "Boardwalk Empire" to premiere in 2010. Set in Prohibition Era Atlantic City, the series will star Steve Buscemi, Michael Pitt, and Kelly MacDonald, among others.
—-
George Carlin might (finally) get an Emmy if Academy voters give him props for "George Carlin: The Kennedy Center Mark Twain Prize." C'mon, give an old man a break!

8:00pm Hell's Kitchen FOX - The chefs compete in a blind taste-test challenge; one team serves raw meat and the other team runs out of potatoes.

9:00pm Swords: Life on the Line Discovery - Tempers flare aboard the Big Eye; stormy seas beat up the Eagle Eye II; a man is nearly sent overboard on the Sea Hawk.

9:00pm Nova scienceNOW PBS/KCET - How and why earthquakes strike in the heartland; the importance of sleep in strengthening memories; marine geologist Sang-Mook Lee.

10:00pm The Colony Discovery - The colonists run into missionaries on a river trip; the arrival of two new visitors creates an internal rift.