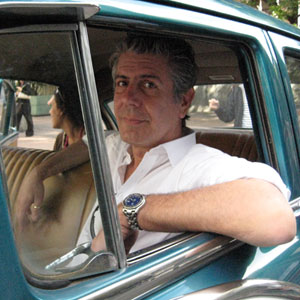 "Anthony Bourdain: No Reservations" season finale tonight at 10pm on Travel Channel
We're back from hiatus: almost two weeks without watching 1 second of television, not even reruns, not even collectors' series DVDs, not even screeners from the networks. This spiritual cleansing has made us resolute in tolerating even less crappy television. Millions are being spent on this stuff so it should be good, right? If it isn't, we will say so. Even the programs we like usually have some shortcomings which we won't hesitate to point out. The Fall premieres schedule is merciless and we won't be merciful either.
—-
For example: Last week's "Anthony Bourdain: No Reservations" visit to Montana was pure crap. We love Bourdain but the attempt to spice up this collection of old farts with shots of slow-moving freight trains flopped. Let's hope tonight's episode, based upon viewer questions, gets him back in our good graces.
—-
The Daytime Emmys were doled out last night - ABC came out on top followed by PBS in difficult-to-distinguish and unnecessary categories like "most informative talk show" and "most entertaining talk show". Check out the tally over at Variety. The CW broadcast of the awards flopped to it's lowest ratings ever.
—-
Fire on the Mountain (not the Grateful Dead song): With the LA fires again making national and international news, we recall our recent interview with The Weather Channel's Jim Cantore who specifically talked about the built up areas of the Angeles National Forest. You heard it here first.

8:00pm Top Gear BBC America - Jeremy, Richard and James drive three supercars through France; then beat the crap out of a Ford Focus.

9:00pm History Detectives PBS/KCET - A sketch of a man while he was a prisoner in a German war camp; the Seadrome, a floating airport anchored to the ocean floor.

10:00pm The Rachel Zoe Project Bravo - Rachel and Brad race against the clock to find the perfect gown for actress Anne Hathaway

10:30pm The Soup Presents: The Best Clips of '09 So Far E! - If you missed this last week, here's your chance to watch this hilarious summary!