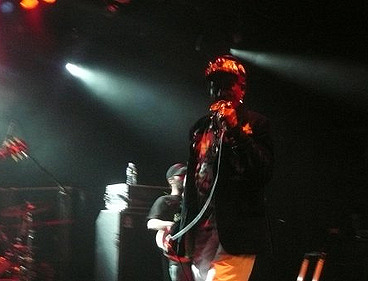 Photo by Roger Park/LAist
On Tuesday night “The Upsetter” and one of the founding fathers of reggae dub, Lee “Scratch” Perry, played to an enthusiastic crowd at the Key Club in Hollywood.

Lee Perry’s set proved that one of reggae’s most eccentric and innovative artists can still mash it up and control to the fullness. Even in his early 70s, Perry commands an engaging stage presence and delivery. Decked in an eccentric outfit consisting of many layers of gold jewelry, rainbow socks, Lion of Judah painted boots, mirrors, Rastafarian patches and a fire-red dyed beard and hair, Lee Perry was a sight to be seen. The dub pioneer sang, toasted, rapped, philosophized and preached while he paced across the stage. Above him was a video screen showing psychedelic video footage of Perry and Rastafarian symbols.

Born as Rainford Hugh Perry in Jamaican in 1936, Perry was a crucial part of reggae’s mutations. In 1973 Perry built The Black Ark studio and worked with equally legendary artists like Bob Marley & Wailers, Junior Murvin and The Heptones. Behind the mixing controls at The Black Ark, Perry crafted his sonic mastery. His innovative creations remain highly influential to many artists today and spans across musical genres. Perry, along with fellow Jamaican musician King Tubby, is regarded as the legendary pioneer of dub music.

On Tuesday night, backing/touring band Lionize provided a roots foundation for Lee Perry to build booming and mighty dub towers. On songs like the seminal “Blackboard Jungle Dub,” Perry chanted and interacted with the crowd who danced with abandon. The stage lights often reflected the shiny bits of Perry’s clothing, which flashed ribbons of blinding light. Lee Perry occasionally would tap a mini-mixer effects board at the front of the stage and dot the songs with sonic slices of tripped out blips and thunder.

Towards the end of the show Perry invited several women from the audience to shake their “pump pum” on stage and to share the spotlight.