Last week LAist took MTV up an opportunity to hang out at Rob Dyrdek's Fantasy Factory, a 25,000 square foot complex which is home to Rob's business empire Dyrdek Enterprises and the setting for his reality show, which enters its second season tonight at 9pm. To celebrate the new season, Rob along with the cast of "Nitro Circus" and "Bully Beatdown" (season two of both premiere tonight as well) got together for a Tuesday afternoon of Velcro suit dirt bike jumping and other various shenanigans that most human beings wouldn't dare to try.

Situated between two fruit factories in Boyle Heights, the Factory is the only indoor concrete skate park. It's also the home of the world's largest skateboard, a tennis ball cannon similar to the one the American Gladiators used to shoot, numerous basketball hoops, DC Shoes logos galore and a ping pong table. With all the toys at his disposal, ironically it was the ping pong table that Rob had to pried away from to chat with us for a bit.

"I don't know how someone gets so obsessed with ping pong, but it is so real right now, I'm obsessed" said Rob who brought along his paddle for the interview. He explained, "This is a $230 paddle. This is an end-all be-all paddle. I'm stomping everyone now." The pro skateboarder turned MTV reality show star added, "What I would equate this to is driving an automatic Twin Turbo Porsche and feeling like 'I could be a race car driver,' and then getting into an F1 car and not being able to get it out of gear."

For the second season of Fantasy Factory which kicks off tonight at 8pm on MTV, Rob tells us, "We set it off by me buying a race horse that I call 'Mega Horse' and jockeyed it for its first race at Hollywood Park under the name 'Bolt Speedman,' it truly was one of the most psychotic things I've ever done in my life." He adds, "It will never translate to TV how truly fucking scary it was. I knew my horse was the fastest but I had to stay on and control it as it pulled away from the pack."

From the looks of the trailer, it looks like we'll see more of the same high priced, high speed, hi-jinks we've come to expect from Rob, along with a little help from John Mayer and Blink 182. Don't expect, however, to see Rob's former on-screen sidekick Christopher "Big Black" Boykin this season. When asked if there would be any chance of seeing Big this season, Rob simply said two words, "Absolutely not."

Aside from being completely obsessed with ping pong, Rob also informed us that he's setting his attention on his new pro skateboard league. The entrepreneur says, "Getting my league up and running by 2010 is my main focus right now."

Along with Rob, LAist also had the chance to speak with Travis Pastrana and Jolene Van Vugt of the action sports adrenaline ride that is "Nitro Circus."

Travis, who was coming off of a second-place finish in Rally at the X-Games last month, told us "I'm bummed because the X-Games is your one chance to shine and I blew it." The Red Bull sponsored star adds, "I love to race. I had definitely had my shot to win and I blew it."

Travis also informs us that his face time on MTV has helped him gain attention with a different crowd. "It's just a different demographic. Whenever I go to a motocross track or X-Games, those fans know the sport. But now I get spotted walking through the airport by 80 year-old grandmas who tell me they saw me on 'Nitro Circus.'"

This New Year's Eve here in Los Angeles, Travis will attempt to break the record for the longest jump in a car, the current record is 171 feet. He tells us, "Technically 172 is a record but Red Bull and myself aren't going to settle for just breaking the record, we want to push it to see how far we can fly." The 25 year-old motocross star who was recently roasted at the Avalon in Hollywood, tells us he's aiming for a 300 foot jump. 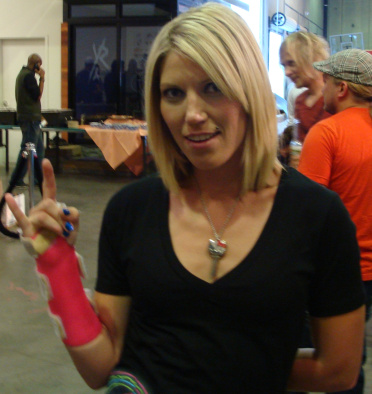 Jolene Van Vugt of "Nitro Circus" wears a cast after breaking her wrist training for the X-Games | Photo by Joe Nicchi/LAist
Jolene, the lone female cast member of "Nitro Circus," was wearing a cast on her right arm. She informed us that she broke her "wrist while training for the X-Games, racing dirt bikes." The pro motocross racer added, "I snapped it in half on a 65 foot triple, when I landed it broke and I had to get a plate set in screws."

Both Jolene and Travis agree that Season Two will be bigger than "Nitro Circus'" insane first season. "It's bigger than you can imagine. Season One was awesome but you always have to step it up. We've got basejumping, and cars and bikes jumping over buildings and people being shot out of cannons this season," says Jolene. Travis adds, "Take Season One and make it twice as big and twice as dumb and somehow we're still walking."

Also in attendance at the Fantasy Factory was host of "Bully Beatdown," Jason "Mayhem" Miller. We had a brief conversation with the mixed martial arts star who hosts the show that throws bullies into the ring with professional fighters. "LAist, oh yeah. We talked before. I love you guys." It's always nice to hear kind words from someone who gets paid to punch people in the face.