LAUSD Board Approves School Choice Plan Amidst Cries of 'Recall' 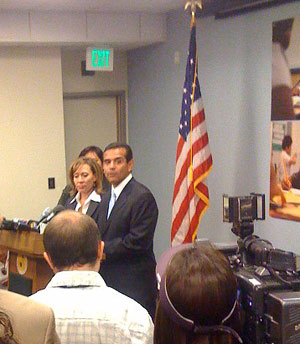 Mayor Villaraigosa and plan author and Board VP Aguilar hold a press conference following the meeting (Reader submitted iPhone photo)
The Los Angeles Unified School District Board of Education voted 6-1 yesterday to approve a controversial plan put forth by Board VP Yolie Flores Aguilar called the "School Choice" plan which will allow private organizations and companies to submit bids for operational control of several schools in the district, including as-yet unopened campuses as well as troubled schools.

The LAUSD's Downtown meeting room was packed with people, many of whom were there to express dissent about the plan and how the District handled engaging the public in the pre-vote discussion process. The meeting ran "more than four hours of debate" and included "often- heated public comment," ahead of the vote, which saw only Marguerite LaMotte voting against the plan, according to the Daily News. Often, as Board President Monica Garcia and Aguilar spoke, the crowd issued cries of "recall," and implying they should be jailed, according to one Twittering attendee.

Mayor Villaraigosa addressed the crowd gathered outside before the meeting, continuing to voice support for the plan and lauding it as a beacon of reform. Following the vote he also joined Board members in addressing the press and those who remained, noting that the plan will rely on parent involvement, and that he remains a great supporter of unions.

It's the unions, however, who believe allowing private groups to run portions of something publicly funded, is unconstitutional, and the LAUSD will likely see lawsuits spring forth immediately in response to the plan. Regardless, Superintendent Ramon Cortines believes this is not a way to "not [hold] your mini- district superintendents accountable," as UTLA President AJ Duffy suggests, but rather a "creative solution."