TV Junkie: The Kids in the Hall are Back! In Canada.... 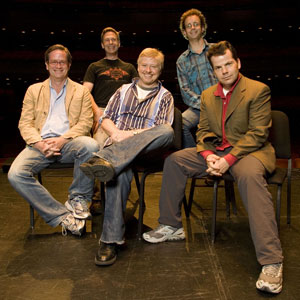 "The Kids in the Hall" have reunited to shoot an 8-part comedy-mystery for Canadian television. The series will air on the CBC network in January 2010 but no word on if/how/when the series will air on US TV.
—-
The TV Junkie will be going on hiatus next week to rest his weary eyeballs. We'll post a "must-see" list for the week along with some other recommendations. Thank you so much for reading! We'll be back by the 30th.

9:00pm Monk USA - When Monk and Natalie get stuck in a small desert town, he must uncover the link between a missing woman and a UFO sighting.

9:00pm Being Human BBC America - Mitchell uncovers the truth about the vampires' plans to start a mass conversion

8:00pm Who Wants to be a Millionare? ABC - Season Finale

10:30pm Entourage HBO - Vince and Turtle decide to arm themselves after a break-in; Drama tries to repair his tarnished relationship with a network executive