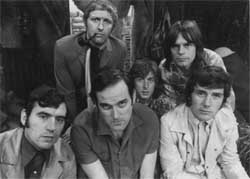 IFC will be airing a 6-hour documentary on Monty Python in October!
As it is a slow TV news day and a night with a very empty TV schedule, we'd like to remind people of the various programs over at the Paley Center including a weekend celebration of Hanna-Barbera as well as the chance to scope out the Fall Preview Parties.
—-
We are incredibly happy to see the upcoming six-hour documentary "Monty Python: Almost the Truth (The Lawyer's Cut)" airing on IFC in October. Check back at the IFC website in mid-September for a chance to win tickets to the in-theatre airing of the documentary with the entire surviving cast of Monty Python.
—-
Fans of "Deadwood" might be interested to learn that ensemble player John Hawkes will be joining "Lost" for its final season.

8:00pm Project Runway: All-Stars Lifetime - Two hours before the premiere of Season 6, eight stars from past seasons, including Los Angeles based designers Santino Rice, Sweet P and Jeffrey Sebella, will face off in this special.

10:00pm Royal Pains USA - While in New York to learn more about Boris' mysterious disease, Hank discovers that the Gardners are trying to strip him of his medical license