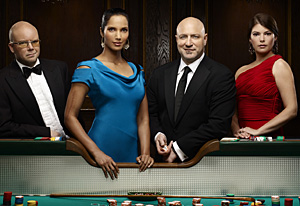 "Top Chef: Las Vegas" premieres on Bravo at 9pm
Hey all you TV stations that laid people off by the score, your revenue will rebound by 5.2% in 2010 so think about rehiring. We're not satisfied with looking at just one boring news anchor no matter how much you make them move their arms around.
—-
As part of the ever-expanding Emmys, Buzz Aldrin will accept an award on behalf of NASA for the broadcast of the Apollo moon landings 40 years ago. We were going to make a Michael Jackson moonwalk reference but decided against it.
—-
Yesterday conservative columnist Robert Novak died of complications from a brain tumor. Novak spent over 25 years on CNN voicing his particular brand of extreme conservatism - that tenure alone should prove to neo-cons that the network is not, and has never been a citadel of liberalism.
—-
Speaking of death: Today news producer Don Hewitt died. Hewitt was the creator of CBS' "60 Minutes", a program that changed the way news was reported and set the high bar for all other news programs to follow. Perhaps only PBS' "Frontline" has come close to the standard. And hey, it's still a popular show getting the 2nd most viewership this week. For more on Hewitt, check out a series of interviews with him on the Archive of American Television's YouTube channel. RIP Don.

8:00pm Who Wants to Be a Millionaire ABC - Contestants answer trivia questions to win cash; Snoop Dogg plays for charity; Ken Jennings is the lifeline expert.

9:00pm Man vs. Wild Discovery - Bear travels to Alabama where he takes on white-water, comes face to face with a wild boar and braves a raging forest fire.

9:00pm Leverage TNT - The team tries to infiltrate a corporation responsible for putting tainted food on the market.