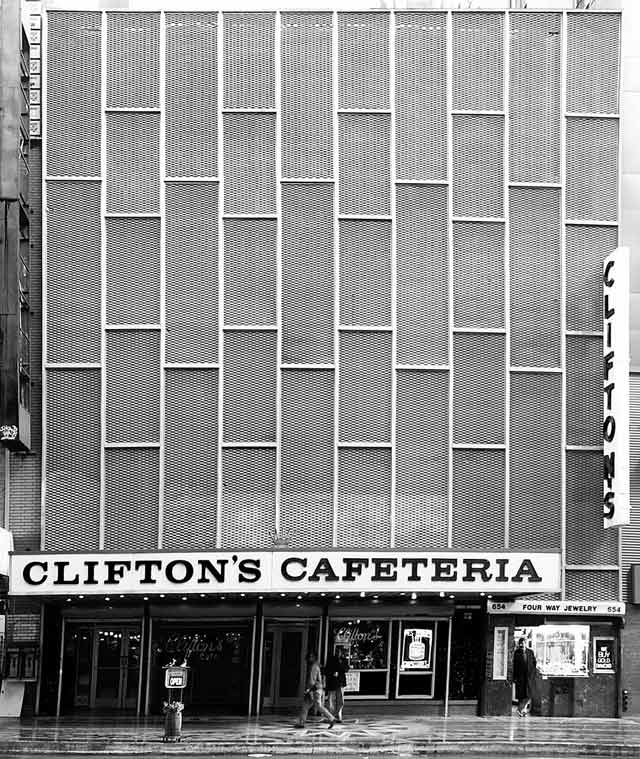 Photo by jeffkingla via the LAist Featured Photos pool on Flickr

Last week came the news that the Clinton family (yes, Clinton) had decided to sell the building that has housed Clifton's Cafeteria, known as Clifton's Brookdale because of its whimsical forest themed decor, since 1935. Although few people admit to finding the food offered at the last of the Clifton's Cafeterias a gastronomic revelation, the news brought the immediate fear that this would bring about the end altogether of a decades-long institution in Los Angeles. While the Clinton family hopes to just unload the property but continue to operate the cafeteria (they actually only bought the building at 648 S Broadway in Downtown outright in 2006) now seems like a fitting time to fill in the gaps of local history when it comes to the Clintons and their Clifton's Cafeterias...and maybe, if you're hungry, prompt a trip with a tray down the lanes of the eatery—the last of a dying breed.

Clifton's began in 1931, when Clifford Clinton, son of a hotel and restaurant man from Missouri who'd made his way out west in the 1880s, bought a troubled cafeteria-style restaurant on Olive Street in Downtown Los Angeles. Born in 1900, Clinton had a very profound belief in feeding those in need, thought to stem from a childhood missionary family trip to China where he encountered extreme poverty (MacVean). He operated his cafeteria, named by merging the first part of his first name, "Clif," and the last part of his last name, "ton," by the rule of pay-what-you-can, and "dine free unless delighted," due to his Christian faith and wish to help the hungry and homeless, particularly at the time, as it was the Great Depression. 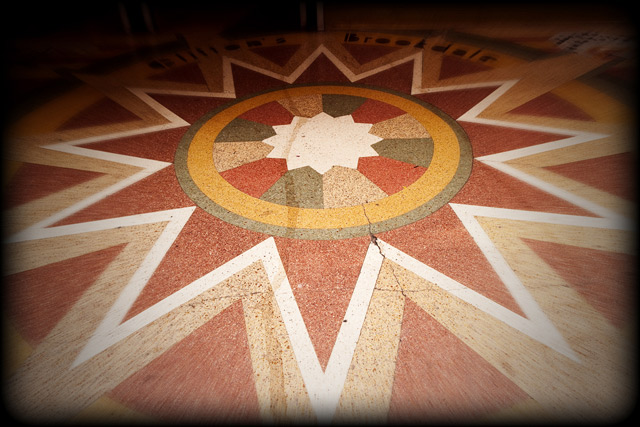 It was, in fact, this feed all at no cost policy, that prompted Clinton to expand his offerings and open another cafeteria, and later in life, to pursue the idea of providing the indigent and downtrodden with foods rich in nutrients that would sustain them for longer periods of time. Clinton eventually sought the help of a Caltech biochemist and used the Clifton's kitchen as a testing lab to produce what he called "Multi Purpose Food" or MPF that would pack nutrition into small portions without breaching any dietary laws of any religion that he wanted the government to distribute in major cities. Alas, it never panned out, but Clinton did continue to work with philanthropic groups aimed at helping the hungry for the duration of his life (Fay). 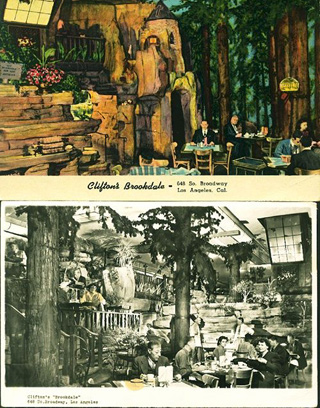 But all that came later. First, the early Clifton's Cafeterias were opened in Downtown LA, and they were adored by consumers of all backgrounds, and known for their kitschy decor. Clinton bought what was the Boos Brothers Cafeteria on Broadway in 1935, and began to transform the space into a woodsy refuge reminiscent of his summers spent as a boy in the Santa Cruz Mountains. He commissioned mountain-like sculptural features, themed rooms, a waterfall, a meandering stream, a forest mural, and a quiet chapel inside the massive space, and named it Clifton's Brookdale, offering patrons a restful and idyllic setting where they could enjoy their meals.

After gaining attention and praise for this all-out theme, when Clinton and his wife Nelda returned from a vacation to the "South Pacific and Orient," arriving back in LA "with treasures and ideas from this vast empire" in 1939. He was inspired to redo his first cafeteria with a tropical motif, and thus the "Pacific Seas" was born. Here Clinton incorporated a huge waterfall, a Polynesian grass hut, a tropical jungle scene mural, and a space on the mezzanine that "rained" in twenty minute intervals. He didn't stop at the interior, having remodeled the entire face of the building in his theme ("waterfalls, geysers and tropical foliage - all of which [were] brilliantly illuminated in the evening") to the chagrin of the Los Angeles Architectural Commission, who threatened suit against Clinton for the blight on the landscape. 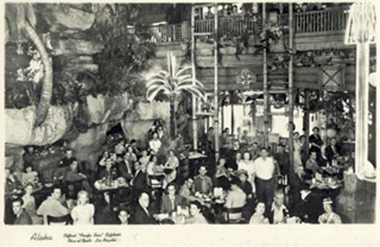 Postcard from Clifton's Pacific Seas
Clinton opened up operation of the two eateries to the next generation of his family in 1949, when his son Donald and daughter Jean (married to Ronald C. Roeschlaub) assumed his shares (Clinton's brother Edmond didn't sell his shares to his niece and nephew until 1965). The duo were deeply involved in the business, having participated in their operation in some form since childhood, spending a month each summer working in some department of the cafeteria (salads, desserts, etc.) from age 11 and up (Loper). Donald was in charge of the business and legal aspects, and Jean took charge of food, personnel, and decor in what was an amicable and natural split of duties (Loper).

It was some time before the Clintons decided to expand. In fact, the chain did not make motions to become an "empire" of any sort until 1955, when they expanded to the Lakewood shopping center, taking advantage of the fairly new phenomenon of what we know as the "mall," and the suburbs' increased availability of square footage. The 12,500 square foot cafeteria opened in 1955, and aimed to serve 2-3000 diners per day. Until 1960, the Clintons operated this 3-cafeteria chain, when the "Pacific Seas"--referenced by Beat writer Jack Kerouac, even--was closed and demolished (i.e. "pave paradise, put up a parking lot"). 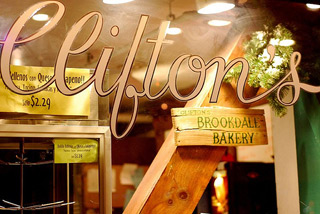 Clifton's Brookdale. Photo by Melle Music via the LAist Featured Photos pool on Flickr
Following the Lakewood opening came West Covina, another suburban mall location, which served the community from 1958 to 1978, when they relocated to the Westfield Shopping Town and reopened as The Greenery (with a garden motif, of course) and operated until as recently as 2003, when they finally shut down.

Malls seemed to be the way to expand, and Clifton's enjoyed a successful two decades operating a location inside the Century City Shopping plaza, the fifth in the chain, which seated 425, was 13,000 square feet, and had a Spanish theme ("Clifton's...Open"). The location opened in 1966, but closed in 1986 when both their 20-year lease expired and the plaza was slated for a major renovation aimed at attraction fewer senior citizens and more upscale Westside shoppers. The cafeteria space, located near the Gelson's (Mayfair) supermarket, was on the other side of the mall from where the new "food hall, five sit-down restaurants and a 14-theater movie complex [were] being built at the northwest corner of the shopping center near Santa Monica Boulevard and Century Park West," (Baird). The shutdown had loyal (and mostly elderly) customers "up in arms," because while Clifton's had been there 20, the mall had only been there 22, and the two seemed to be inseparable. Clifton's had been offered a stall in the new food court, but the company's president said that would be "impractical," noting that to do so "would be like trying to put a 747 into a garage," (Baird). 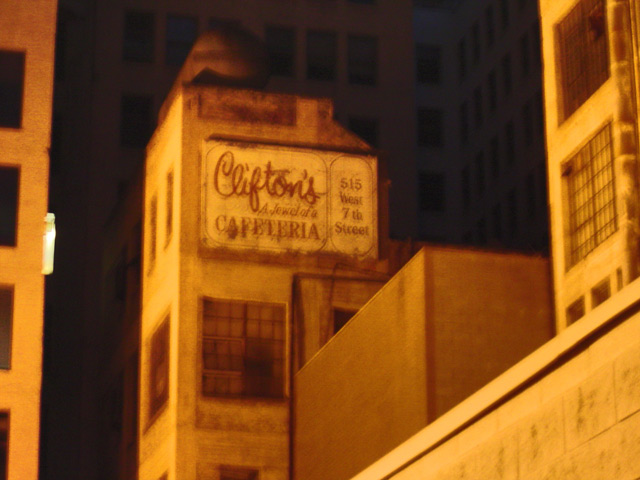 Before then, however, the family tried to make another go at an urban cafeteria, and opened the Silver Spoon location at 517 West 7th Street in 1975, which was a 5-story affair inside the 1920s Brock Jewelry building, where at one time you could find "breakfast and luncheon seekers eat[ing] among the windowed cases filled with Brock and Clifton memorabilia," and "upstairs, bakers roll[ed] out the pastries int he corner once reserved for goldsmiths," (Loper). The Silver Spoon held on for sometime, but closed in 1997. (Scenes from Fight Club were filmed there, according to Wikipedia).

The last Clifton's to open was one that seemed poised to serve the clientele it had then become known for. In 1987 they opened a small location in Laguna Hills near the retirement community of Leisure World. At that point, though, nostalgia was the driving force, as explained by Bonnie Harris in the LA Times:

Clifton's Cafeteria in Laguna Hills was never really about dining, despite the however-many elderly customers who, three times a day for the last however-many years, turned it into their personal dining room and devoured their favorite push-tray choices of chicken and dumplings or ham hocks and lima beans.

Truth is, those who know say, the little cafeteria always stood for something bigger. Going to Clifton's, wedged between a drugstore and a store selling orthotic footwear, was about making a connection. For 12 years, since the chain restaurant opened across the street from Leisure World, senior citizens have accounted for 90% of the cafeteria's clientele.

The location closed in 1999, much to the dismay of the elderly patrons, who saw the eatery as an homage to their earlier years and many of whom had fond memories of visiting earlier locations. 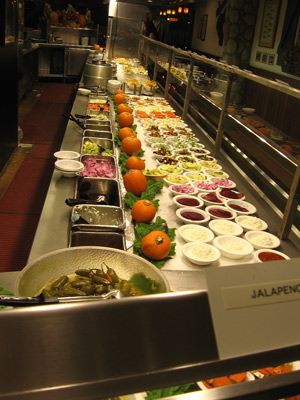 How's the food? Photo by Ned Raggett/Flickr
But now all that's left is Brookdale, the enchanted forest where you can eat brightly-colored cubes of wiggly gelatin and get turkey and gravy all year-round. Is the food at Clifton's all that great? California PBS icon Huell Howser has always been enthusiastic about it, and in multiple TV visits over the years has talked with those responsible for the cakes, entrees, macaroni and cheese, salads and so on, which were once the closely guarded domain of Jean Clinton Roeschlaub. According to The Food Musuem:

The food at Clifton's is mostly prepared from scratch, using quality ingredients to produce some of the best "comfort food" in town. A large variety of healthy salads are made daily along with soups and freshly baked breads (the jalapeño cheese rolls are a must). Entrées include hand-carved roast turkey, ham, brisket, baked halibut, salmon, chicken, pasta and oxtails. The macaroni and cheese is "two thumbs up" according to [Huell] Howser - and many of the regulars who come back for more - and the desserts were voted "Best Desserts" by L.A. Downtown News' readers in 2001.

The food is, like the atmosphere, more nostalgic than a culinary delight, but many hope that the cafeteria will remain open, despite its long-waning popularity both with customers and as an overall food trend.

Although the Clinton family (Donald's son Robert is now in charge, and the sole remaining Clinton in the business) finally bought the building just three years ago, there has been much turmoil among the family itself in recent years, along with the turmoil in the economy and their own financial success. In the summer of 2006 Jean Clinton Roeschlaub was found dead in her home, and the 83-year-old widow's death was ruled homicide, and remains unsolved.

What will become of Clifton's Brookdale? If the building sells, Robert Clinton hopes to run the cafeteria still, which continues to serve the same menu in the same rooms (and the top-most floor now has a museum-like array of memorabilia patrons can go upstairs and see, if the section is open). Not much has changed inside, save the prices, and the faces, but the world outside has... Can the last of the Clifton's Cafeteria's make it? Only time will tell. 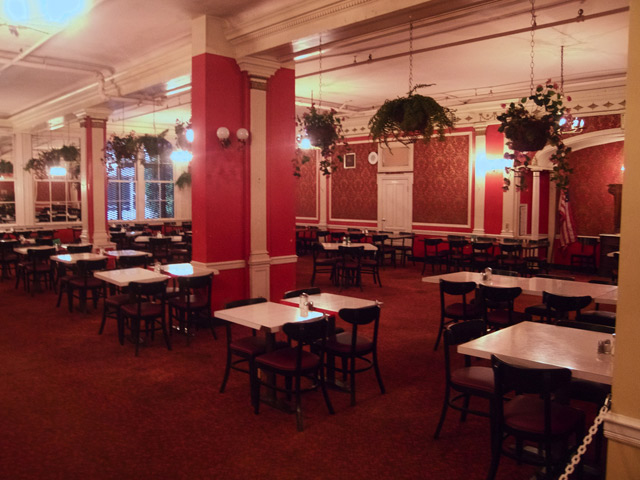 The top floor of Clifton's Brookdale. Photo by Nigel Stewart via the LAist Featured Photos pool on Flickr 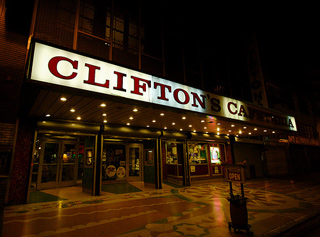