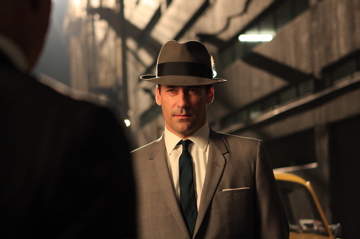 What we can't ignore, even if we wanted to, is this Sunday's season premiere of "Mad Men" on AMC at 10pm. The "Mad Men" hype machine has been in overdrive for over a month with Banana Republic promotions, avatar generators, Esquire pictorials, Wall Street Journal profiles, Jon Hamm et al appearances on Conan/Fallon/etc. and tonight cast members of "Mad Men" will make a (doubtless hilarious and self-deprecating) appearance on E!'s "The Soup" at 10pm. We're going to be watching the premiere on Sunday - watch for the trending topic on Twitter fo sho. We also thank Jah there is no programming conflict between "True Blood" and "Mad Men".
—-
Fans of Holly Hunter's "Saving Grace" on TNT may be sad to learn that the series will end in 2010. Question: Will this change even if Hunter wins an Emmy in September?
—-
Yesterday Thomas Lennon of The State, "Viva Variety", etc. Tweeted that Comedy Central has canceled "Reno 911!" We haven't seen confirmation from Comedy Central but Gawker wrote it up this AM. While the show may have seen better days, Reno was still a fun place to stop on Wednesdays.

9:00pm Monk USA - While investigating the high-profile murder of a maid, Monk finds himself increasingly drawn to a case involving a visiting African man

9:15pm The Adventures of Buckaroo Banzai IFC - (1984) A space hero (Peter Weller) and his team of do-gooders battle Dr. Lizardo (John Lithgow) and his army of Red Lectroids. This movie is awesome!!!

10:00pm Psych USA - When Shawn and Gus search the wreckage after a billionaire crashes his plane in the woods, they arrive in time to hear his last words.

9:00pm Being Human BBCA America - Mitchell puts his secret identity at risk after becoming friends with a neighbor; Annie lusts for revenge.

9:00pm True Blood HBO - Eric is able to get inside Sookie's head; Lafayette and Lettie Mae try to figure out how to get Tara away from Maryann

10:00pm Hung HBO - Ray begins to develop feelings for Jemma; Tanya meets someone who sets out to help her get through her writer's block

10:00pm Defying Gravity ABC - The crew faces its first major crisis when a series of system failures plunges everything into chaos, as power, heat and gravity-control are lost.

10:30pm Entourage HBO - Eric considers the offer while trying to patch things up with Ashley; an appearance by Mrs. Klein tests Ari's resolve at work