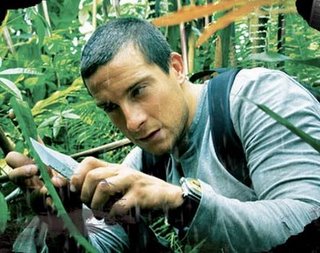 "Man vs. Wild" with Bear Grylls season premieres tonight at 9pm on Discovery
So AMC's got "Mad Men", "Breaking Bad", and "The Prisoner", and now they're going to produce a series based on the zombie comic book "The Walking Dead". Is basic cable the place for innovation now?
—-
At the end of July, CBS and the TV Academy had announced plans that segments of this year's Emmys would be pre-recorded so that more "entertainment" components could be included in the 3 hour show. Due to massive criticism, and the show will be all in real time - you can read CBS' entire peas & carrots statement here.
—-
Tonight is the season premiere of "Man vs. Wild", check out our earlier interview with host Bear Grylls.

8:00pm Who Wants to Be a Millionaire ABC - Contestants answer trivia questions to win cash; Lauren Conrad plays for charity; Cokie Roberts is the lifeline expert - whoa, from NPR lifeline to this, amazing.

9:00pm Wipeout ABC - Contestants face the Blue Ball Run, the Sweeper Wall and the Dodge Ball Beam Walk as they compete for the $50,000 grand prize.