The comedy duo of Cheech & Chong rose to fame in the 1970s and 80s through their stand-up act, comedy albums and films. Their first film, Up in Smoke, released in 1978 remains a cult classic and is considered to be one of the first movies in the "Stoner film" genre. The duo split up in 1985, with both pursuing successful solo careers. On July 30, 2008, the two reunited for the first time publicly at The Troubadour to announce their fall comedy tour, "Cheech and Chong Light Up America/Canada."

Tonight at 8 p.m., you can find Cheech & Chong honored in part two of VH-1's “Lords of the Revolution” a five-night documentary series celebrating the counterculture icons of the ‘60s and ‘70s. The series, hosted by Richard Belzer will pay homage to "Lords of the Revolution" like Muhammad Ali (last night's episode), The Black Panthers (Wednesday night), Timothy Leary (Thursday night) and Andy Warhol (Friday night).

LAist had the honor of speaking with Cheech & Chong about their reunion, their break up, Tommy's arrests, Cheech's wedding which took place on Saturday (Mayor Antonio Villaraigosa officiated), legalization of marijuana and the moon. Yes the moon, they go out there, man.

1) What does it feel like to be considered "Lords of the Revolution?"
Cheech Marin: It feels noble. I'm a lord. I like for people to kneel down to me.

Did you ever think you guys would be in the same company as Andy Warhol, Muhammad Ali and the Black Panthers?
Cheech: (laughing) Yeah we did, actually.
Tommy Chong: I realized I smoked with all of the people who are in this series. I mean they weren't with me, but I smoked with them.

Cheech: It's funny the reaction we're getting to "Lords of the Revolution." You hear the media say, 'surprisingly Cheech and Chong are included in this group.' It's always surprising to the mainstream media elite, they don't fully understand our popularity, which is immense. It's been going on for generations, it cuts across all socioeconomic, age, gender and racial lines. And we're finally getting recognition for that.

2) Back when you guys broke up in 1985, did you think it would take as long as it did to reunite? Did you think there was a chance that you guys would never get back together?
Cheech: I was concerned that it might never happen. But in the back of the mind, I always knew we'd do something together.
Chong: Cheech always says that we were joined at the hip, but really we were joined at the lips. We had the same words and the same thoughts.
Cheech: We were always trying to find something to do together but something would happen or the timing wouldn't be right and it would fall apart.

There's a scene in The Corsican Brothers where Cheech and I burn down the house and then we try to get our way back home. I go one way. He goes the other way. We end up meeting 20 years later. That's what really happened to us in our careers. Cheech went one way and I went the other way. We ended up together.

It was ironic that it was almost a Disney movie that brought you guys together, Lion King.
Chong: Yeah they wanted me to do that with Cheech but I turned it down. I didn't want to be a sellout.
Cheech: I couldn't wait to be a sellout.
Chong: We always had that divide and conquer attitude though. Cheech always had a crowd that would follow him to the depths of hell and I had the same thing. So we went on tour and they all met together. It made for quite the meeting of slackers and doers.

3) In an interview you guys did with the Indianapolis Star last year, you said that money was a big reason why you guys got back together. Did the fact that reuniting was sort of a business decision for you guys affect your creative chemistry?
Chong: Everything has to do with money. Cheech has divorces he's got to pay for. My jail time, you know. It was all about finances. It was nice to be able to put together this big tour after 30 years. I was flabbergasted by that.

We're like farmers who forgot we had a crop growing in the back forty. You mean people want to buy this, they want to pay money for this thing we forgot we had?

Cheech: I think the fact that money brought us together actually had a positive effect on us. Very positive.
Chong: It was nice to cash big checks again. Right, who doesn't love that?
Cheech: Most of all though, we enjoy working together. We enjoy doing this. We never lost the chemistry. It wasn't hard at all to get back to work together. The chemistry never left.

What's been the highlight so far for the newly reunited Cheech & Chong?
Cheech: I think it's really just how much fun we've been having. We've had the chance to play some great venues, we did Radio City Music Hall for the first time. We sold it out. We've gotten some great crowds.
Chong: I think the highlight for me was last Saturday when I watched Cheech get married by the mayor of Los Angeles. To me that shows the respect that was overdue.
Cheech: Yes, well, we always throw some great parties.

Where was the wedding held?
Cheech: My house.
Chong: It was held at the Cheech Estate in Malibu.
Cheech: Cheech's Beach Estate
Chong: Cheechland

4) Why do you think you guys have been able to remain relevant for so long? What's been the secret to maintaining longevity?
Chong: The secret is in the movie Up in Smoke. It's one of those rare movies that you see it, and then you want to see it again. The movie's a lot like a joint. It takes you on a timeless journey. We're timeless. We aren't driven by fads, we are a fad. A fad that will never go away. No matter how many bitchy reviewers would like it to go away. 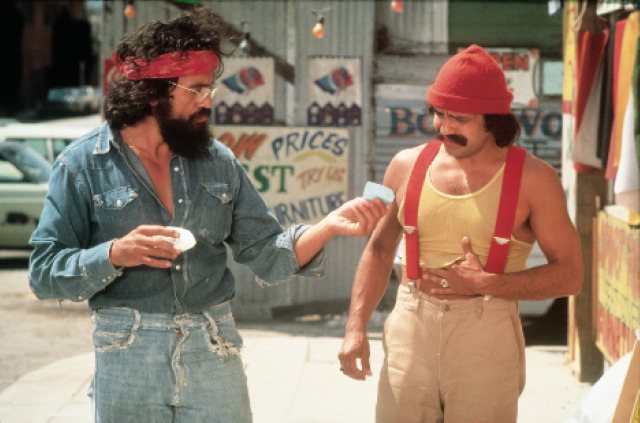 5) Has there been any famous people, public figures, who has said they were fans that came as a shock to you?
Chong: The Queen of the Netherlands. Queen Beatrix. She'd go to our movies, whenever we put out a new one, in disguise. She was such a Cheech & Chong fan.

You know who else would watch us all the time was Sugar Ray Leonard. We get a lot of pro athletes. We go to a Lakers game and we get players from both benches come over and talk to us. We're like a walking drug test.

6) Are you guys familiar with AB390 which would legalize marijuana for recreational use here in CA? The State says it would raise 1.4 billion.
Chong: Well that sounds good.
Cheech: It would do those numbers overnight.
Cheech: I think that's a very modest estimate.

Do you think the culture we live in today or the economy will play a larger role in getting marijuana legalized?
Cheech: I think both will play in a part in it but really the economic benefits are what will make it happen quicker.
Chong: Yeah I think both are important but we also can't ignore the medical community as well. We're finding more and more legitimate medical uses. It's been proven to be effective in diseases like Parkinson's and MS. They can't hide from that anymore.

The only casualty of legalization will be the DEA. They won't be able to take people's belongings because they grew some pot in their basement. Other than though, legalization is going to have a great deal of positive effects.

Speaking of having your things taken, Tommy were you ever able to get back your DVDs?
Chong: No. The government keeps everything. They destroy everything. The movie was a big hit, it was shown on one of the cable networks and was big with the critics.

You became a target of the government. Did that ever make you paranoid?
Chong:The trouble with potheads is we never get paranoid until it's way too late. I was three months into my sentence when I woke up and thought 'Oh man, I shouldn't have put my face on that bong.'

That's why there's so many drug offenders in jail. We don't get paranoid because we don't think we're doing anything wrong. There's nothing morally wrong with what we're doing. We're just taking our medicine like good people do.

7) What's next for Cheech & Chong?
Cheech: We're going to do a new tour. We'll probably do a movie. Some of our old record bits are being animated as we speak.
Chong: And we're going to colonize the moon. We're going to get way out there.
Cheech: Yes, it will be the first stoner haven of the universe.

*We know, there's a lot more than seven questions here but it's Cheech & Chong, so why not ask a few more?