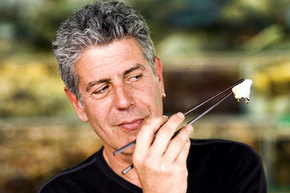 "Anthony Bourdain: No Reservations" on Travel Channel at 10pm - San Francisco is the target
Could anything be as uninspiring as August television? Lookit what we've listed, what are we missing? What precious programming gem are you watching tonight? All we can say is, thank you Anthony Bourdain, we can't wait to see you in our old stomping grounds, San Francisco.

Other than leftovers from last week's Television Critics Association meetup [which we were locked out of, BTW, hint hint], there isn't even very much to report on TV-wise. Uh, hey, how about The CW's "Gossip Girl" promotion with the tagline, "WTF", which supposedly stands for "Watch This Fall".

8:30pm Our Mother's House TCM - (1967) Seven British children bury their mother and hide her death, until their long-lost father (Dirk Bogarde) returns. Kind of like Weekend At Bernie's but with cute English accents.

9:00pm The Closer TNT - A body stuffed inside a large box sends Brenda on a search for suspects