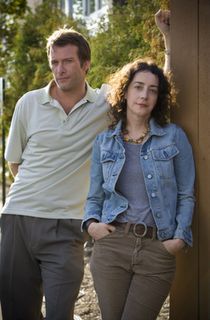 NBC is going for the young urban crowd on the opening night of Jay Leno's show with guests Rihanna, Kanye and Jay-Z. We're kind of thinking that this won't work so great as the older crowd that was Leno's base has left the network for Letterman.
—-
Advertisers bought 15% less ads from the Big 4 networks for the 2009-2010 season and the minutes they did purchase, they paid less for. Less money for programming means, what, nothing but reality TV?
—-
To start working yourself into a froth over the upcoming season of "Mad Men", we suggest you check out today's ample story in the Wall Street Journal. It provides an in-depth summary of characters as well as a detailed analysis of the participation of women in the script-writing and directing of the series.
—-
This weekend we suggest watching the remainder of "Bollywood Hero", the remainder of Shark Week, and then Sunday it's HBO night, as usual. But please click through to the full listings of highlights we found for you.

8:00pm Sharkbite Summer Discovery - The American coast is plagued by shark attacks during the summer of 2001

9:00pm Blood in the Water Discovery - A series of shark attacks in 1916 provide inspiration for the movie "Jaws."

9:00pm Mental FOX - After years of trying to find her, Jack is reunited with his schizophrenic sister

10:00pm Bollywood Hero IFC - After publicly breaking one of India's greatest social taboos, Chris Kattan tries to salvage his reputation while securing financing for the film.

9:00pm Dirty Jobs: Jobs That Bite Discovery - Experts study sharks' feeding patterns and the types of attacks they use to kill their prey.

9:00pm Lars and the Real Girl Showtime - (2007) Family and friends are unsure how to react when a lonely young man (Ryan Gosling) forms an emotional attachment to a life-size plastic woman and treats it like a real person.

10:00pm Bollywood Hero IFC - With financing for the film in place, Kattan discovers that he is not the leading man in the project.

8:00pm Who Wants to be a Millionaire? ABC - Season Premiere

10:00pm Defying Gravity ABC - Personal and professional relationships intensify, both aboard ship and on the ground