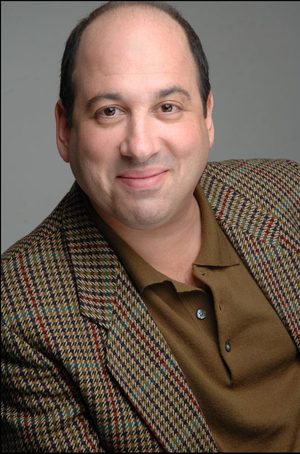 You may recognize Michael from his work on the critically acclaimed series, "The Wire" as Maurice "Maury" Levy, a corrupt and unscrupulous defense attorney who represented drug traffickers. Kostroff has gone from slimy lawyer on the gritty streets of Baltimore to the Disney Channel's "Sonny with a Chance" where he can be seen alongside Demi Lovato playing a nervous TV producer, Marshall Pike.

Kostroff has also written Letters from Backstage: The Adventures of a Touring Stage Actor, a hilarious account of the life of a touring stage actor. In addition, he also teaches "Audition Psych. 101" a highly regarded one-night seminar that deals with the mental challenges actors face in auditions. (Kostroff's next Audition Psych. 101 seminar will be held in Hollywood on Saturday, September 19th. For more information send an email to auditionpsych101 @ aol.com.)

Michael was kind enough to exchange emails with LAist to discuss his work on "The Wire," making the transition to a Disney Channel show, running into fans of the show and learning what a "re-up" is.

1) How was it making the transition from the mean streets of "The Wire" to a Disney Channel show in "Sonny with a Chance?"
I love it, especially because it confuses people. The Wire was probably the best show I’ll ever be on, but actors do more than one kind of role, and I wanted my next project to be something totally different, so people would know I can play more than just slimy lawyers. On Sonny with a Chance, I got my wish. The show is really funny, I play a nervous TV producer, and I love the kids in the cast. They’re all really great people. Nothing will ever be The Wire, but this is a great departure. And I like having a new, and very different, group of fans. Instead of grown-ups coming up and saying “Wow, are you sleazy!,” I have smiley little kids running up and hugging me.

2) Back when The Wire was in its fourth season, I saw Gbenga Akinnagbe shopping in H&M in the Beverly Center and remember feeling scared as if he really was the assassin, Chris, that he played on the show. How often do people recognize you in public from the show? How often is the reaction related to the character you played?
People have told me that they had to make a conscious decision to get past their gut reaction upon seeing me, which is often “eeew,” and come up and talk to me. As far as I’m concerned, that’s an enormous compliment. I’m nothing like the character, so I’m immensely flattered that people found my creepy, immoral Levy believable. I loved that role.

My favorite story of being recognized was the day I was in the produce department of a grocery store, minding my own business, picking out tomatoes, when from behind me I heard, “You motherfucking son-of-a-bitch.” Well, I don’t walk around thinking about being on the show all the time, so I was a little thrown. I wondered if maybe he’d had his eye on the particular tomatoes I was considering. But when I turned around to see the guy smiling at me, I did the math. “Oh,” I said, “you watch The Wire. “Yeah,” he said, smiling even wider, “You’re a real asshole.” And that’s how people tell me they like my work.

3) Numerous members of the media, both those who cover television and those who don't like Time Magazine's Joe Klein, ESPN Radio's Jason Smith and Howard Stern Show's Gary Dell'Abate have admitted to being huge fans of The Wire. Why do you think the show has had such an impact on the media?
Well, I don’t think it has anything to do with these guys being in the media. I just think, if I may be candid, that the show was really, really fantastic, and that lots of people in lots of professions found their way to it. The reason we know about fans in the media is because they’re in the media.

Now, as to why so many people love the show, I think some of that has to do with the uniquely complex characters. (We had a heartless killer who made sure his pet fish were cared for if he had to go out of town to knock someone off. I mean, come on. That’s good!) In fact, I played one of the few characters whose other side was never indicated. I was just a bastard. But most of the characters were so layered and surprising. And I also think people liked the fact that our show made you use your brain.

I spent weeks wondering what a “re-up” was. On most shows, some character would have explained it. On our show, you just had to wait until it made sense. Then one week, I saw the drug dealers calling out “re-up’s in” as the fresh supply of drugs was delivered. “Aha!” I thought, “The re-up!” I also think our show is loved because it’s so honest and real. Not a lot of tricky, manipulative plot stuff, just a realistic portrayal of a broken city. And I’ve yet to meet a Baltimorean who protests the depiction as unrealistic.

4) You teach a class, “Audition Psych. 101”, which I have heard from some actor friends, is highly recommended by agents/managers. Tell me a little more about the class.
My class --- it’s actually a one-night seminar - is unusual in that it deals with the mental challenges actors face when they audition. Auditioning is hard. It’s weird. And actors do all kinds of things to themselves that make it worse. “Audition Psych. 101” offers actors alternative ways of approaching the process, both mentally and philosophically. And I am really overjoyed when those who’ve attended tell me that it changed their careers. What an amazing thing to be able to do for my colleagues.

5) What would be a dream role for you?
I don’t have a very good answer for that one, because what I love best about my career so far has been the variety. I love that I get to do dark, intense stuff like The Wire and the Closer, but also do a comedy for Disney, and tour the country in The Producers (an adventure I recount in my book, Letters from Backstage). My dream is to keep doing things that surprise people; and hell, to keep working. For an actor, working in itself is a dream-come-true.

6) Recently, Nia Long made news for her criticism of singers/rappers who act. As someone who has worked alongside Method Man, how do you feel about Nia's criticism?
Well, I never worked with Method Man. We just weren’t in the same scenes. But I liked his work on the show a lot. I don’t think anyone could have picked him out as a non-actor at all.

In fact, I would argue that he is an actor, proven by his work on the show. My take on it is this: If someone can do the work, then he should be welcomed. But if someone with no acting skill gets cast just because he’s famous, then that’s an insult to my profession.

For example, in recent years, Broadway producers have taken to casting completely inappropriate, untrained movie stars who don’t fit the roles, don’t have the skills and don’t know how to do that kind of work. Again and again, they’re surprised when the reviews are bad. One of these days, I hope they’ll do the math and realize that people want to see good work, period.

Speaking of Method Man, who do you think was the least favorite character on The Wire? My pick is either your character or his, Cheese.
I’d like to think it was Levy. I sure tried.

7) What do you enjoy about living in Los Angeles? What are some of your favorite places, things to do?
To tell the truth, I really miss New York. Maybe I’ll become a big TV star so I can go back and do a Broadway show.