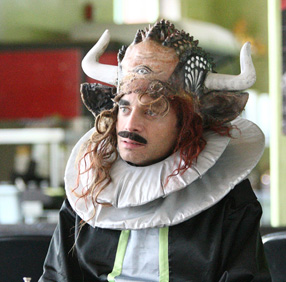 Chris Kattan's will be on Fallon tonight to talk about "Bollywood Hero" premieres tomorrow on IFC
Shark Week!

This slow week of TV is heating up a bit tonight. Of course we have more Shark Week offerings from Discovery, but there's dueling cooking shows on Bravo and BBC America, not to mention the awesome movie, Man Bites Dog on IFC at 10pm.
—-
Fans of Michael Ian Black and Michael Showalter will be happy to know that the duo will be liveblogging tonight at 10:30pm when the new episode of their show airs. Feel free to hit their website in advance to ask questions, pay homage, etc.
—-
Paula Abdul announced on Twitter last night that she will not be returning to "American Idol".
—-
Starting on Sunday, NBC will begin to air (on all of its channels as well as on United Flights) a 1/2-hour special highlighting their new fall lineup. We assume they're trying to make the most of losing 5 hours of primetime programming to Jay Leno's new show but we'll watch it because it's hosted by "The Soup"'s Joel McHale.
—-
The TV Junkie Plan: "MythBusters: Jaws Special", "Great White Appetite", Man Bites Dog, Conan, Fallon.

8:00pm Wipeout ABC - Former fan favorites return for an all-star episode in which contestants take on an obstacle course in hopes of winning the $50,000 grand prize.

8:00pm So You Think You Can Dance FOX - The top four dancers perform.

9:00pm Great White Appetite Discovery - Observing the feeding habits of the great white shark in some of its major feeding grounds.

9:00pm Leverage TNT - A clinic is forced to close because its funds were lost in a Ponzi scheme

9:00pm Moment of Truth FOX - Back from hiatus

10:00pm The Philanthropist NBC - One of Phillip and Teddy's college friends asks for help negotiating with Indian and Pakistani governments; Teddy goes missing.

10:30pm Michael and Michael Have Issues Comedy Central - Black leaves the brunt of the workload for Showalter.