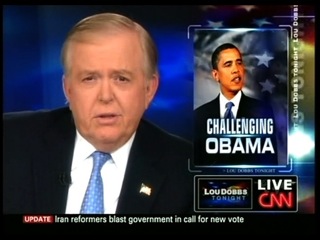 Lou Dobbs - too cranky
So remember when everyone was taking a dump on Dan Rather in 2004 and CBS sold him down the river just to, seemingly, stay chill with the Bush Administration? Now Dan's specifically suing Les Moonves and CBS News President Andrew Heyward and the network for $70 million.
—-
Also in news (god we're desperate), CNN is trying to "negotiate" a change of attitude for Lou Dobbs, who is now airing a lot of "birther" hype in addition to his anti-immigrant rants. Evidently they still want him to be a crank but not too psycho a crank.
—-
Shark Week continues!!
The TV Junkie Plan: "Top Five Eaten Alive", "Sharkbite Summer", "Saving Grace", "The Daily Show", Conan, Ferguson.

9:00pm Sharkbite Summer Discovery - The American coast is plagued by shark attacks during the summer of 2001.

10:00pm Saving Grace TNT - The squad investigates the murder of a whistle blower; Grace's brother Leo is convinced his neighbor is keeping a dead body in his house