TV Junkie: Shark Week Is Back! 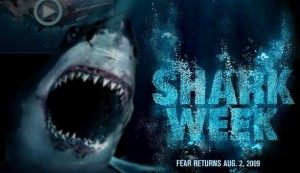 Shark Week is Back!!
Finally Shark Week is back on Discovery - and it's about time because other than Shark Week and IFC's "Bollywood Hero" (on Thursday), this is one dead week of TV.
—-
This week the TCA gave it's annual "Program of the Year" award to "Battlestar Galactica", with HBO scoring more awards than any other network. [Hey TCA, ain't it about time you offered LAist membership? We write more about TV than a lot of your members do.]
—-
The CEO of PBS discussed that the Obama Administration has left funds intact for the network unlike the ongoing efforts of 8 years of the Bush White House.
—-
The TV Junkie Plan: "Air Jaws", "Deadly Waters", "Weeds", "Nurse Jackie", Letterman, Fallon.

8:00pm Air Jaws: Sharks of South Africa Discovery - White sharks hurtle out of the water to attack their prey.

9:00pm The Closer TNT - Brenda reopens a murder investigation when the man who confessed gets the details of the crime wrong during his allocution

10:00pm Raising the Bar TNT - Jerry tries to get a continuance in order to give a woman the chance to help her son complete his college applications

10:00pm Day of the Shark 2 Discovery - A great white shark breaks through a shark cage, trapping the divers; a shark attacks a former Navy SEAL.