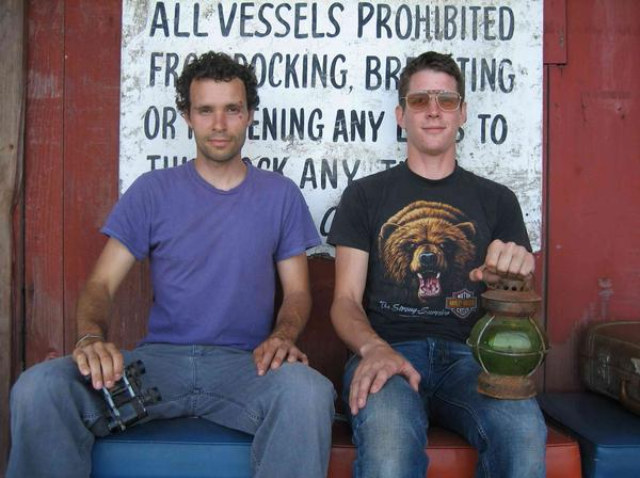 Some people go green by driving Priuses. Others brag about their bio-diesel conversions. Don't get me wrong. These are both admirable attempts at meaningful earth friendliness, but when you really want hardcore bragging rights, nothing beats abandoning the auto altogether. For their first West coast tour, The folk-pop duo known as Blind Pilot decided to head from Vancouver to San Diego by...bicycle.

Constructing their own homemade trailers for their instruments and with no real set plan, Portland natives, Israel Nebeker and Ryan Dobroski, set off down the coast on only two wheels. Before his show at the Wiltern Monday evening, Nebeker was kind enough to talk with the LAist about his harrowing adventures on that bike tour as well as the debut album that followed, 3 Rounds and Sound. Here is some of what was said.

A blind pilot is one of the scariest things I can think of. Why did you choose that name?
When Ryan and I came up with the name in Astoria, when we were planning our first bike tour. It seemed fitting for what we were trying to do. We hadn't heard of anyone else who had done it and we hadn't booked that many shows. It was if we were flying into the unknown. We couldn't see what's going to happen.

What inspired your bicycle tour of the West coast?
Well it was both economic and environmental, but we decided to do it just for the fun of it and the adventure of it. The idea came when we were in Portland. Portland has a huge bicycle scene. The city is really easy and fun to get around by bike.

Did you have any harrowing moments?
Oh sure, there were a few. For example we got lost right off the bat. We were in Vancouver and there were no routes to Seattle at all except for the interstate, which we weren't going to try on our bikes, so we had to go north to go south. It was really hard. We were kind of lost until we got to western Washington where we had to head north again to get to Seattle. It was a mess.

Was there any scary moments with drivers on the road?
Oh yeah, there were a couple of moments. We were on the Highway 1 and there was some guy in a boxy white truck who was playing chicken with Ryan, just trying to scare him. He was driving right at him, but he waited too long to swerve and the truck went up on two wheels! It was so close to Ryan's face! The driver missed Ryan but hit the embankment on the other side.

Holy crap! Did you stop? I would have hightailed it out of there.
We stopped. He was okay, just a little shaky.

I heard your first tour was cut short because your bikes were stolen. Did you up your security for the second run?
We got our bikes stolen in San Deigo when we were visiting the Modern Museum of Art. We got outside and someone had cut our locks. It sucked. So the second time around we got better locks and we also rarely ever left the bikes alone, but that was easier to do because our friends Luke, Katie, and Ian had come with us and so we rarely had to leave them unguarded.

Is your band a democracy or a dictatorship? You went from a two piece to a nine piece for this album.
A little of both I think. Ryan and I still do all the business side. We organize the shows and write the music. But we see adding people to go on tour as the best part of this job. We get to be with friends and play music with people you love to be around! It's the best. And of course everybody's opinions are valued.

Was "Go On Say It" based on an actual incident?
Well, it's really a bit of both. The inspiration came from me being really furstrated with a relationship that I was in. I felt like we were parting ways and neither of us really wanted to, you know? She said something to me that out of context was such a reasonable, sane thing, but the way she said it really upset me. I remember thinking, "My whole life after this will be different." Just because of the way she said that one thing. The story in the song is fiction, but the feeling within it is based on that moment. 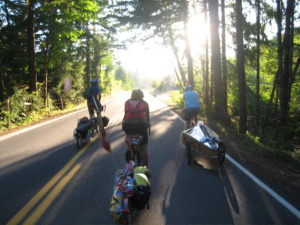 Why did you name the album 3 Rounds and a Sound? Three rounds of what exactly? Boxing? Whiskey?
Yeah, it struck me as a funny phrase when I heard it. It alluded to a lot of meanings. I liked that. It made me think of rounds of a song like in "Row Row Row Your Boat." The expression is actually a traditional Chinese phrase, which I thought was apt because of the importance of the bicycle in China. People rely very heavily on them. The expression is something you say to a newly wed couple. They represent the necessities you need in life: a round bike wheel, a round clock face, a round spool of thread and the sound is radio. You need to have all of these essential needs met in order to get married.

What song are you most proud of on this album?
"The Bitter End," mostly for the very end part. That's my favorite part of that album. I wrote it when I was waiting tables in Portland. We heard on the radio that a tidal wave was going to hit the coast and that no one would have time to get out. My parents live on the coast and I spent the whole shift being really scared for them. I couldn't deal with it. All of the lines were down or jammed so I couldn't get through to them. I just kept on thinking how much different my life was going to be with out my parents, When the tidal wave hit it turned out to only be three feet, which I found out near the end of my shift around three or four hours later. I went home and wrote that song. Writing songs is like my stress relief mechanism.

What was the worst show you ever did?
It was at my cousins Bat Mitzvah in LA. She had asked me to learn a song in Hebrew for the service. I was a really busy musical school student at the time and so I learned it on the ride down. I stayed up all night the night before and practiced it over and over. By the morning I felt really felt good about it. I totally had it down. Then I got up on stage, sang two lines, and forgot everything. It was the worst experience on stage I've ever had. I was really really lucky the rabbi knew the song and sang with me. Otherwise I would have had to walk off the stage. 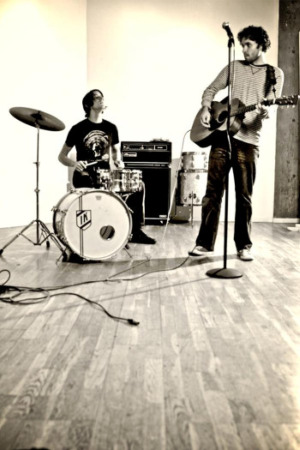 What is the weirdest thing you ever saw in the audience?
We have a super fan in southern California.

You have a super fan?
Yeah! We love him. He's been there at every show we do down there. He's got a huge boisterous voice and he sings along to every word on every song. He just sings at the top of his lungs. One time we played in San Diego, and he showed up with a huge sign that said "Uh huh! Uh huh!" which is what we sing in one of the songs. He stood right in front and waved the sign whenever we sang those lyrics. That was pretty strange.

If you could change one thing about the music industry what would it be?
I'll ask Ryan. (pause) Ryan wishes that radio wasn't so homogeneous all across the country. t

That's a good one! Do you have any strange promoter stories?
Oh yeah! There was one promoter....well, he's a really sweet guy so I won't say what city he's in, but he has this knack for making our show feel like a Christian youth group event.

How?
Well, he's always touching everyone in the band like a pastor, and he talks in a pastor sort of way.

Like Ned Flanders?
Yeah! Like Flanders. He's super nice, just totally oblivious. He won't leave you alone. For example the last time we went on tour we had high aspirations for eating healthy, but he thought it would be the greatest thing ever if he ordered out Chinese food. Usually promoters give you money so you can go get something to eat, but he had ordered just the greasiest stuff and tons of soda pop. It was really, really gross, but he was very pleased. After the meal David asked him if we got drink tickets for the show and the guy looked so crushed. He was like, "But I got you all this..." David was super uncomfortable.

If you were stuck on a deserted island and you could bring three worldly
possessions what would they be?
A guitar...wait...Katie is emphatic that my guitar strings would break. She has a point. She wants me to bring a flute.

Can you play the flute?
No, but I'd learn. Okay, a flute, and I guess my girlfriend and Ryan's girlfriend. (laughs)

Why?
He just grosses me out a lot. He's so sleazy. Once my sister had a boyfriend worked super fancy hotel in Portland. He hooked me up with a penthouse suite for a night with my girlfriend. I was so excited. It was going to be great! Then when we were checking in and the girl at the counter said, "Do you know who was the last person to sleep on that bed? Neil Diamond. He just checked out today." I was totally grossed out. It ruined it for me.

What are the odds? Well thank you so much for talking with us, Israel.
Thank you!

Blind Pilot will be opening for Gomez tonight at the Wiltern! Doors open at 8pm. Be sure not to miss them! Tickets are $25.