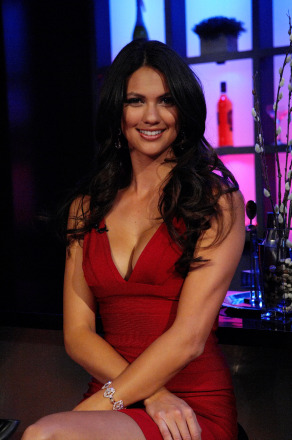 Megan Abrigo is the hostess of the first-ever prime time poker themed game show on a broadcast network with the premiere of NBC's “Face the Ace” tomorrow night (9-10 p.m. EST).| Photo by Stephanie Moore (NBC Sports)
LA has a diverse cast of characters. Whether it's the characters with stirring stories or interesting occupations or the people who are just simply characters, this town has them all. In an effort to get to know some of those characters a little better, we've created "Seven Questions with..." If you have a suggestion for a future Seven Questions subject send us an email.

A native of Hawaii, Megan moved to Los Angeles to attend Loyola Marymount University, where she graduated with a studio arts degree. She was interested in a career in advertising design but following her graduation in 2005, decided to "have some fun and try something new." So Megan became a model. Four years later, she's got noteworthy gigs like the hit game show "Deal or No Deal" (she's the model responsible for opening up briefcase #6) and the lead role in the video for Chris Brown's single "Forever" (the original video, not this video) on her resume.

You can see more of Megan tonight alongside former Sopranos star, Steve Schirripa in the premiere of NBC's "Face the Ace," the first-ever prime time poker themed game show on a broadcast network. Contestants of "Face the Ace" sit at the table with some of the best poker players in the world and go heads-up for a chance to take home $1 million.

We were lucky enough to sit at a table with the show's beautiful hostess in the patio area of Urth Cafe in Santa Monica. Megan chatted with LAist about the show, her career, her co-host, the challenges of being a briefcase girl and working with the now infamous Mr. Brown.

1) What was your first modeling gig?
I think I did some shoot for Teen Magazine. It was fun, you get to be in a bathing suit and hang out with people. It's always nice to get paid to wear a bikini.

2) How was working with Chris Brown?
You know, he was very professional. I didn't get to know the personal side of him but he's very nice. I think I got yelled at by his publicist though, she was mad because I took a picture with him. I'm not like that though, I just wanted the picture for my own archives, that's all. It was a great experience though. I got to try a little wire work, a little dancing. The producer, Joseph Cahn is a really nice guy. I like how it came out. Some people have recognized from the video. After the controversy, obviously I got a lot of questions from people about working with him but like I said he was really nice to me and I enjoyed working on the video.

3) What's the premise of Face the Ace?
It's a really cool premise. It's the first reality-based poker show. They take a normal person to test their skill against a professional poker player and they can win up to a $1 million. It's similar 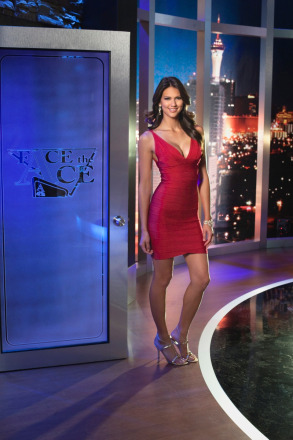 Megan Abrigo is the hostess of NBC's "Face the Ace" which premieres tonight at 9-10 pm.
to "Deal or No Deal" in that you really want these people to win and it's heartbreaking when they don't win and incredible when they do get to take home the money.

4) Are you a poker player? Has working on the show made you more interested in poker?
For fun as a hobby, I'll play with friends. I think the people who are really good at it get mad at me because I'm not the analytical, mathematical person who plays poker. I'm more like, 'maybe I'll get lucky, let's go all in.' I'm more on a whim poker player, I'm not consistent at all. It's fun though. I'm defintiely more interested in the game now thanks to the show. I got to know the terms more, I learned about the other poker games, besides Texas Hold-em'.

5) Do you enjoy working alongside Steve? Were you a fan of "The Sopranos?"
Honestly, I haven't watched a lot of "The Sopranos." It's a very popular show, especially amongst young males. When we were in Vegas, so many guys would come up to him and tell them how much they loved "The Sopranos." He was very nice. Behind the scenes he's really personable. He gets on set and just turns it on with the humor and banter with the contestants.

6) How did you get the 'Deal or No Deal' opportunity come along? How do all of the girls get along? How difficult is it to stay focused on the show, when you're just standing there with a briefcase? How was it like working with Howie Mandell?
When I went in for the casting, I didn't even know what the show was for. There was about 900 girls. I went in for three interviews. After the third interview they tell me I got it. And I said, 'Ok, what did I get? What are we doing?' I found out it was this big game show. I did the pilot and the show got picked up and I was made one of the 26 original girls. From season 1 to season 4, I've always been briefcase #6.

I think "Deal or No Deal" was a big jumping off point for me. It's opened doors from that I might not have had if it weren't for my time on the show.

Surprisingly for 26 girls, everyone's got their head on straight. We get along. Of course, there's the occasionally cattiness and some little moments. Still to this day, even though we're not filming right now, we still call each other, be each other's bridesmaids, hang out, go out for dinner. I love it when I see one of the other girls moving up, I getting excited and call them up and send a text to congratulate them on their success.

Howie's really nice, very family-oriented. His wife and kids were always around the set. Even to this day he stays in touch. He knows I'm from Hawaii so if he's doing a show in Hawaii he'll call me and ask if my family wants to go, he'll get them tickets to the show. I didn't know how big of a germaphob he was, but he's definitely open about it. He's done some things on the show where you're like, 'Wow! He's holding a dead fish.' He'll definitely surprise you, like that sometimes.

7) You've lived in LA for eight years now, how does it compare to Hawaii? What are some of your favorite places to go here, and favorite things to do?
LA is very different from Hawaii. LA's fast paced, to me anyways, Hawaii when I get back there, I get into that relaxing atmosphere. We just take our time, it's island time where you're like 30 minutes late for everything. When I go back to Hawaii and it's like slippers, shorts and a t-shirt or a bathing suit. It's whatever you're comfortable in. Nobody really cares about how you're dressed.

I love Urth Cafe. I love Joan's, they've got good pizza and salad. Venice is a really cool area. I love the South Bay, Manhattan Beach. I love to stay home and relax but I also love to go surfing.

Face the Ace premieres tonight at 9pm on NBC