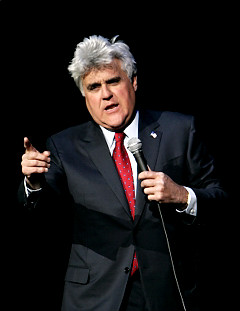 Jay Leno's 10pm show destined for success? Nice flag pin.
Research firm NewMediaMetrics is predicting that Jay Leno's 10pm show will take off. Confirmation that there really are that many old people in America.
—-
"Burn Notice" and "Royal Pains" are on tonight and they'll be on for a while as USA has ordered 16 more episodes of each.
—-
Anyone catch the Jordan Schlansky segment on Conan last night? He's always a treat - catch it on Conan's Hulu channel.
—-
We don't think we can handle many more real housewives, no matter where they're from.
—-
The TV Junkie Plan: "She's Gt the Look", "Penn & Teller: Bullshit!", "The Daily Show", Conan, Ferguson.

9:00pm Burn Notice USA - Barry enlists Michael's help in tracking down his money-laundering client list, which has been stolen