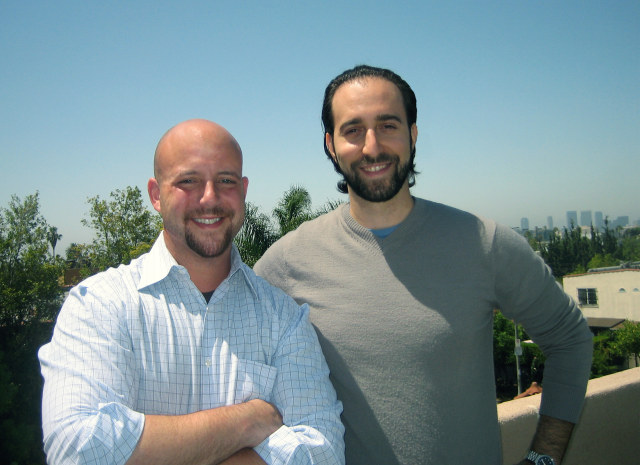 Ron and Gabe run Diligent, a new kind of production company that creates branded entertainment, original programming, and online experiences. They work with brands, agencies, and distributors to create engaging work that gets audiences talking, laughing and sharing with their friends.

With their shop set up in Silverlake, Diligent has worked with Hollywood studios and entertainment brands seeking to enter into the digital space although, they haven’t stopped there. They have clients including: Sprint, Fremantlemedia, Sony, Captain Morgan, The Natural History Museum, and Herbal Essences, amongst others producing web serials, viral videos, and integrated campaigns.

In between producing two new web series for two undisclosed brands with undisclosed distribution partners (those Non-Disclosure Agreements are tight!) and developing a TV show with Alta Loma, Ron and Gabe exchanged emails with LAist, to tell us how they got started, brag about going to the Playboy Mansion and school us on what it takes to make a successful viral video (hint: babies and/or scantily clad women).

1. What made you start up Diligent?
We started Diligent because we saw a need for a company that could produce high quality content using traditional TV values in the digital space. There were a lot of companies producing half a million dollar, 30 second spots for broadcast and there were other companies producing traditional TV shows but they weren’t really innovating. Online, there were a lot of amateur content creators, who, while doing things in new ways, weren’t safe for sponsors.

So, in 2007 we stopped freelancing on TV shows and jumped into Diligent full steam. Since then, we’ve worked with Fortune 500 companies and major distributors including: Sprint, Fremantlemedia, Sony, Captain Morgan, The Natural History Museum, and Herbal Essences, amongst others. Online, we have had a string of successes, including original and branded serials, and viral videos with over 4 million views and have won international awards.

We’re excited about continuing to tell great stories through new mediums and pride ourselves on always looking to do better, whether by utilizing new technologies, forging unique partnerships, or producing innovative content.

2. Who’s the coolest person you’ve worked with? Favorite project you’ve worked on?
Tony Parker of the San Antonio Spurs is kind of the man. We shot a series of promos for the CAA backed web-startup - WePlay for which we were Webby Finalists. We shot with Tony in the Spurs training facility and got to watch a genius at work. He even made a backward three point shot from the key…very cool. He was very easygoing and great to work with… the only negative was that he didn’t bring Eva along.

One of our favorite projects is Couch Crashers for Playboy.com. This is a web series that we brought Bushmills on to sponsor and are producing with Alta Loma (Playboy’s non-adult division). For the show, we get to go to all fun places that guys like - a Mixed Martial Arts tournament, The Vans Warped Tour, and of course… The Playboy Mansion… So we can now check that off our bucket lists. The series has pulled over a million views and we are currently developing the concept for TV as well.

3. What are the ingredients for making a hit viral video?
Dancing babies…talking babies… or babies doing anything for that matter… that, or scantily clad women.

There is a growing theory out there that you can’t plan to make a viral video… that it’s like catching lightning in a bottle. People compare it to how it’s impossible to predict a hit movie or a hit single… So why then do Michael Bay or The Neptunes command such high rates for their work? - Because they are better bets. And that’s what we are in the digital space. We believe there are ways to increase your chances for a video to "go viral".

Here is a basic formula for a successful Viral Video Campaign:
A: Work with people who get the medium +
B: Resist the temptation to just make an ad and be creative with your approach (did we mention talking babies and hot women work well?) +
C: Target your audience and seed your content to all the right places to get the fire started ... All of that together
= Successful Viral Video Campaign!
Now repeat

4. What are your favorite viral videos that other people have done?
We love the Cadbury video with the gorilla rocking out to Phil Collins from a few years ago. It’s such a simple concept but works so well.

Also, the Tom Cruise on Oprah video was pretty magical.

5. If you had to select the top 5 public figures who would get the most views for a viral video, who would you choose and why?
Paris Jackson - If she were to have something to say, the whole world, would literally stop what they were doing and listen.
Oprah… because everyone loves Oprah.
That Fred guy on Youtube seems to get a lot of views.
The Obamas - Because they are America’s family
And of course - Optimus Prime

6. Where are viral videos heading?
Online video is no longer a niche medium. The same number of viewers watched the super bowl commercials this year online as they did on TV. But now, since online video is mainstream there is so much more content online. In order to break through one really has to go louder and bigger and work harder creatively to get attention... especially if you want big attention.

Another approach is to go targeted. Focus on the people who matter most to your brand or your message. This approach was very effective in Maxwell Harper’s online campaign for Obama - who was elected president, so that seems to have worked out pretty well for them.

7. If this Seven Questions feature was going to brought to life through a viral video to make it pop, what would your concept be?
This interview would have been conducted in the nude. We’d definitely pass that video around.

Check out some of Diligent's greatest hits here.