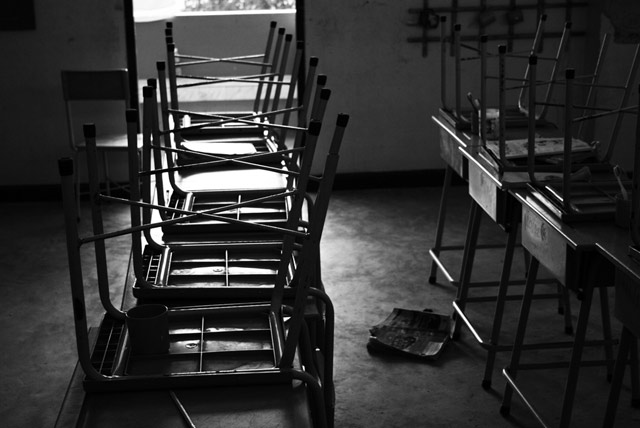 If it's broke, fix it, right? Only what happens when the people who are supposed to fix it are the ones who broke it in the first place? And they happened to have run out of the money it's going to likely take to do the fixing? Easy solution: Sell management of the school(s) to the highest—well, "superior"—bidder.

The resolution is called "Public School Choice: A New Way at LAUSD" and will be voted on at the next Los Angeles Unified School District Board of Education meeting on August 25th, having been postponed from July 14th. The proposal "opens ownership [of schools] to not only the district or charter operations but also the mayors office, private business and nonprofit groups," according to OurLA.org, and has already garnered objections from parents and teachers, and the stalwart support of some school board members—most prominently its backer, Yolie Flores Aguilar—and the Mayor's office. Perhaps because the Mayor's "alliance" for improving troubled schools earned him a failing grade from its participants at the end of this school year, today the LA Times has published an opinion piece authored by Mayor Antonio Villaraigosa endorsing the plan.

As a counterstrike to the ineffective "staus quo," Villaraigosa is urging people to see that the proposed plan would allow non-bureaucrats to "get past the gatekeepers and stop preserving a system defined by low performance, low standards and low expectations." Essentially, the proposal opens up control of some schools to any interested party--including the LAUSD themselves--to apply for "ownership" by providing the Board with what boils down to a business plan for operating, and in theory, improving the school.

Who decides who gets control? Why the Board, of course. Yes--even though the Board may have a vested interested in securing control as one of the bidders.

VIllaraigosa's perspective bears the language of hope that, unfortunately, he's demonstrated rings hollow once implemented. He talks of "embrac[ing] new ideas," and the wish to "turn our public education system on its head," in order to give our grossly under-served children that chance at the quality education that evades them under the current reins. His campaign-style rhetoric is enough to indicate maybe a call to Shepard Fairey to commission a portrait of the Mayor looking dreamily but confidently into the distance under the giant letters spelling EDUCATION is not more than a moment away.

But really he's working to hush the already clamoring voices of objectors who see the option to "privatize" public education. Opines Villaraigosa:

I recognize that these changes won't come easily. I know that the voices of dissent -- the individuals and institutions that rely on and benefit from the status quo -- will try to drown out the calls for reform. But we cannot place the same old failing school system into brand new buildings and expect different results.

Rather than feel threatened by a new system, district leaders and unions should join the effort, present their own proposals, and take the lead in making these new schools the best in the city.

Flores Aguilar's measure is not designed to shut anyone out but to welcome new approaches and pursue models that are already known to work -- regardless of whether the plan comes from charter organizations, teachers or other reformers.

Passing the board measure represents progress on the broader agenda of shutting down failing schools and reopening them as reform campuses. We must not wait for another report card telling us we did not make the grade. We must work together and take action now.So is this the solution?

Tell us what you think: Is this an idea you'd get behind?