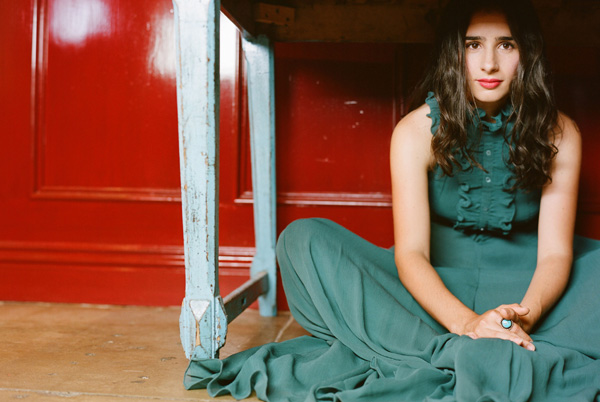 Christina Courtin / Photo by Autumn de Wilde
Christina Courtin first captured attention as a Juilliard-trained violinist, playing everything from the classics to a piece that ends with a smashed violin. Yet all the while, she harbored a secret desire to sing, and as she branched out into this arena, she began building a fan base that started with fellow Juilliard students and quickly grew.

On Courtin's recently released debut CD, you can't help but be drawn in by her expressive voice, and the 10 tracks reveal a seasoned artist. This may be her first record, but she's developed a confidence, a writing style and a playfulness that many singer/songwriters don't achieve until later in their careers. Courtin will be playing Largo at the Coronet on Tuesday night, and LAist spoke with her earlier this month to get the scoop on the new CD.

I notice that the way you breathe often seems to follow a violin bow-like cadence. When it comes to the phrasing, even with homonyms or the same words, you sing it in such a way that it doesn't sound repetitive. Was that a conscious decision?

That's just how I know music, so I guess that translates into my singing. I don't really do things like that on purpose, because I'm a pretty impulsive person in general and I rely a lot on my instinct. I just do what I feel and somehow it works out!

If you were to write your own review of the CD, what words would you use to describe it?

The album seems to alternate between full band and more stripped down arrangements. What was that process like?

The arrangements kind of came out of the process, and it definitely wasn't intentional. Some of the songs came out more sparsely than we originally intended or planned, but I'm happy with it. For instance, I like the way "Hedonistic Paradise" ended up. We did it with a full band and it just wasn't really working, so we took everything apart and recorded it in my house. In the end, it came out really cool and underwater-y. 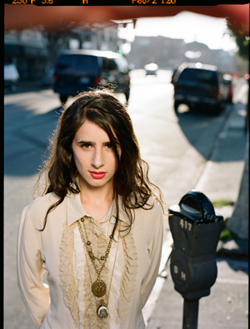 Christina Courtin / Photo by Autumn de Wilde
Which instrument do you most often use when you’re writing songs?

How many instruments do you actually play—obviously there's the violin and you just mentioned the guitar and piano, and I think I read something about the bassoon…

Oh my goodness! I really don't play the bassoon; I played it for one year in high school. I've meddled with it and I love it, but I don't really play it. I play the violin and the viola, then I just mess around with other instruments.

How many violins have you smashed in your day?

Oh! I guess now it's been four.

I hope they were cheap ones!

Yeah, they were. (laughs) I do this piece with a wonderful friend of mine, Michael Warde-Bergman, who's a great accordion player. He wrote me a great piece called "Three Roads" a couple years ago and I smash a violin in it.

We just played it in Chicago and I smashed a violin in front of the entire American Orchestra League, which was insane—all the orchestra heads from all of the orchestras around the world were there checking out new music. And I was up there singing in Italian and smashing a violin. I love that piece.

How fun! Now, getting back to the new CD a bit, you have quite the amazing backup band on the record, including Jon Brion, Greg Leisz, Benmont Tench, Gabe Witcher, the Brooklyn Rider string quartet and a number of others. How did that group come together?

It's crazy, right? Greg Cohen, who's a friend of mine, produced the record and also played bass on it. He's the one who put the band together. We had this idea of going out to LA to do it. He just called up a bunch of his friends and they were all stoked because they got to hang out with each other, which I don't think happens as much they would like. So I think it was fun for them, too.

They talked about the old times and it was good—they have tons of stories. I was just really lucky. And it's crazy because for all them to all be available at the same time is probably rare. It was a dream band.

What was the most unexpected moment where you guys came up with something on the spot as you were in the process of recording?

That's a good question. Some of the overall feels of the tunes were really different than we'd originally planned and it was a little frightening. I was like, "Woah, this is crazy!" I didn't know what to expect at all and it was just really eye-opening, fun, interesting, new and fresh.

Did you always have that toy piano in mind for "Hedonistic Paradise"?

No not at all. That piano is from my great aunt's house. She was moving out of her house that she'd lived in for 50 years. I picked up the piano and I just loved the color, so she let me have it. One day, we were just fooling around with that tune at my house because we couldn't figure out what was wrong with it. We couldn't get it to work for some reason. Then I tried the toy piano and it all came together.

Is that the little piano you're playing in one of the pictures in your CD booklet? I love how it looks like you're casting a spell.

Yeah, that's it. We had a good time doing that photo shoot. That's the room I'm sitting in right now, because all those pictures are from my house. We painted it crazy colors. 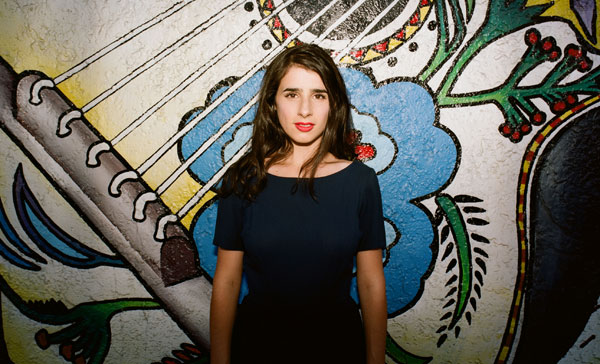 You'll be playing Largo at the Coronet on July 21 and I know you sang there back in 2007. Was that the only time you've performed there?

Yeah, I opened for Kaki King a couple years ago when it was the old Largo. I've been to the new Largo—I saw Randy Newman there, actually, which was really cool. But I haven't played there yet, so I'm excited about that. We had a great time so I'm really looking forward to going back.

Do you enjoy touring?

I love performing on stage. I think it's real important, if people are interested in this album, to check out some of the visual aspects of what happens at a concert. It makes more sense if you see a show. It's fun and intense and it has many facets.

Speaking of facets, do you try to keep your singing and violin work in separate spheres? Do you think you’ll ever mix it up à la Andrew Bird?

When I do smaller shows I play violin more, but for the most part I like to sing with my hands free! (laughs)

When you're not singing or playing the violin, do you have any hobbies?

Yeah, I really like gardening in my back patio. I don't have ground but I have a lot of potted plants that I'm really into. And I'm an exerciser, so I do that a lot. I like watching movies and going to the movies. I just saw Up, which I really loved. And I also like cooking. I'm just a normal person!

What's your favorite dish to cook?

Right now I've been into cooking anything with potatoes—potato salad, potato pie. I don't eat meat so I have to cook for myself most of the time.

Finally, now that you'll be returning to LA, I was curious what your impression is of the city.

I really like LA. I've been thinking about moving out there, but I don't know if I'm going to. I've been in New York for 7-8 years and that's cool, but I may also be ready maybe to do something different. There are no concrete plans yet, but I've had great times in LA, so I love it. The weather is wonderful and I've met some amazing people, so I feel like I've had a charmed LA experience!

Don't miss Christina Courtin at Largo at the Coronet Tuesday night, July 21, at 9 p.m. Tickets are available by calling (310) 855-0350 and they will also be available for purchase at the door. To hear more of Christina Courtin's music, visit www.myspace.com/christinacourtin.