Once upon a time, Los Angeles' San Fernando Valley boasted its own theme park. The theme, ostensibly: Beer. Well, what else would you make the central focus of an amusement park located on the property of a major brewery?

So how did beautiful Van Nuys, California wind up home to the lush, tropical, family-fun oriented Busch Gardens from 1966-1979? It began the previous century with a large-living man named Adolphus Busch, who worked in the brewery supply business in the 1860s in St. Louis, and who married the daughter of struggling brewery operator Eberhard Anheuser in 1861. By the time Anheuser died in the 1880s, the company had re-emerged as Anheuser-Busch, and was making Budweiser in St. Louis, and looking to go national. According to biographies, Busch lived an extravagant lifestyle that found him living all over the country and building palatial homes that drew spectators. One such home was here in Pasadena, with gardens on the property that attracted crowds to take a look, including after Busch's death in 1913, and the gardens were open to the public.

Busch's gardens in Pasadena were a big draw for regular folk and celebrities (and hundreds of movies of the era were filmed there) through the early 1930s, and those who have studied the life of Busch and his business believe the family were pioneers in promoting the German concept of "beer as a way of life." According to the LA Times:

The family offered to contribute the gardens to Pasadena, but city fathers were reluctant to take on the cost of maintaining them, and the land began to be subdivided in the late 1930s. Few traces remain, although some former structures can still be found on private land

.Van Nuys came into the picture in 1954, when Anheuser-Busch opened its brewery there. The brewery was a welcome addition to the community; in fact, "soon after the brewery opened in 1954, and every Sunday for almost two years while their new church was being raised, the congregation of the Prince of Peace Lutheran Church held its prayer services in the Budweiser taproom and cafeteria," (Rasmussen). In 1966 August Busch Jr purchased adjoining land--a cabbage patch--and began to construct his theme park. 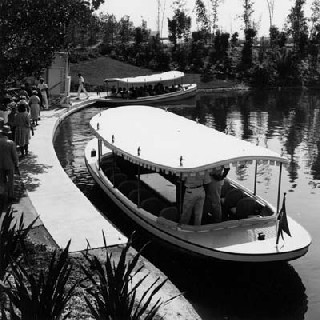 The Boat Ride in 1970 (Photo via LAPL)
This Busch Gardens was a "$4-million theme park and tropical oasis, [added] to the Van Nuys brewery. The 17-acre spread included a monorail that snaked around the facility and passed windows that gave passengers a look at the brewing process" (LA Times).

Accounts of the admission fee vary from source to source, with some remarking that it was initially free (possibly a conflation with the Pasadena Busch Gardens and the later Bird Sanctuary "fee" structure) but raised modestly in 1972 for the 5-acre expansion. According to Rasmsussen:

Busch Gardens soon featured a monorail, boat rides, bumper cars, lagoons, waterfalls, 2,000 birds representing 25 rare species from all over the world, live entertainment-and, once again, free beer. Busch's policy stated that visitors who were of drinking age could have two 10-ounce glasses of beer at each of the five pavilions for an admission price of $1.75-a fee that tripled over the next 10 years.

The company was liberal with its "free beer" policy, which extended to the brewery's employees. This, curiously enough, wasn't a problem until 1982, when one employee who imbibed on his break wound up hitting and killing a 16-year-old pedestrian when he drove off the lot. It took several years of discussions between the workers' unions and the brewery, but the free beer finally came to an end on May 1, 1986, and employees had to settle for two free cases a month instead of "beer breaks" they initially had in their contracts (Rasmussen). 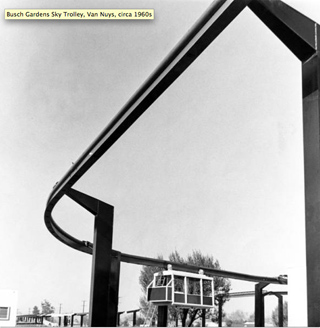 The Brewery Tour in the 60s (Photo via CSUN's archives; Photographer: Jeff Goldwater. Donor: Valley Times)
The public got into the brewery action by taking a tour of the plant, which was conducted on a suspended trolley that traveled in and around the structures where the beer was brewed and bottled and packaged. One fan's website notes:

The actual tracks of the ride's remnants are still visible today on the North side of the Busch grounds along Roscoe Blvd, and passengers driving along the I-405 freeway through Van Nuys California will instantly recognize this building and the remaining tracks. Very sad to see them knowing the enjoyment people got from the ride.

Among those who took that ride were current City Councilmember Tom LaBonge, who went as a teenager. LaBonge reminisced in an LA Times article: "It was amazing. It was a big treat to sit on the monorail and tour that big brewing plant."

It was the expensive expansion in 1972 that saw the addition of the log ride and other attractions of the like, and necessitated the construction of a pedestrian bridge and another monorail line to adjoin the original brewery property to the new section of the park. Beer certainly kept the patrons coming, but many--especially the children--went to see the birds. Busch Gardens had plenty of 'em: "flamingos, toucans, macaws, storks, swans, herons, egrets -- more than 1,000 birds in all." There were bird shows, bird-focused tours, educational opportunities centered around birds. 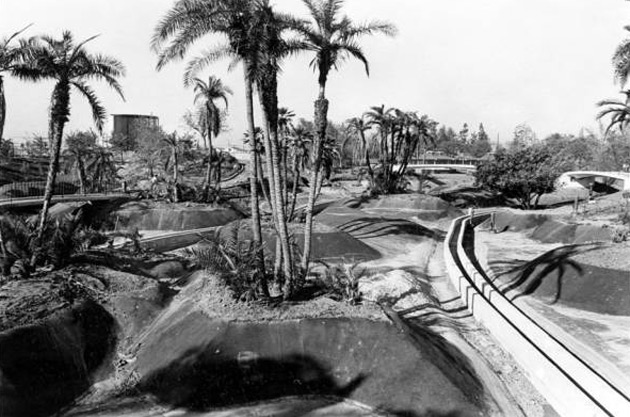 Attendance at the park began to dwindle, despite the free beer, the birds, and the rides. Anheuser-Busch was making a killing with their product, after all; it was in the mid-1970s that "light" beer was introduced, and it soon became extremely popular with domestic brewers. As a cost-cutting measure, Anheuser-Busch shut down the theme park in December 1976 and saved money by no longer having to operate or insure the rides and riders. Under the new plan, the brewery operated the grounds as "a free sales promotion facility," where "beer samples [were] free [and] there [was] no admission charge," just "a $1 fee for parking and $1 for the boat ride," instead of charging a $5.25 adult admission price (Kilgore). August A. Busch III, who ran the operations, noted at the time that "the Los Angeles Gardens has never been profitable," and that their "decision to convert [Van Nuys' Busch Gardens] to a promotion facility will have a positive effect on earnings," (Kilgore).

Instead they focused on the birds that they'd become known for, and from 1977 on, Busch Gardens operated as a bird sanctuary. It officially reopened on January 5, 1977, and boasted "1500 birds of some 180 different species," ("New"). Many wandered freely, some were viewable from the boat ride, and the injured ones lived on their own little island at the lake's center. Guests began their trip with the 15-minute tour of the brewing facility, with audio narration provided by Ed McMahon. 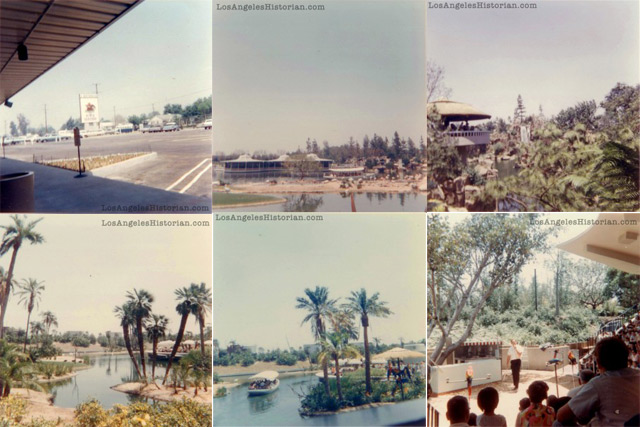 Photo by LosAngelesHistorian.com (Used with permission)

The park was also caring for a flock of parrots that netted them monies from the government:

For one 3 1/2-year period, Uncle Sam paid the company $110,000 in bird-sitting fees related to a flock of fugitive parrots. Federal agents had thought the sanctuary a perfect nesting place for a seized shipment of 205 noisy and colorful Amazon parrots, smuggled in illegally through Mexico. But the government forgot about the parrot stash-until the tab arrived. (Rasmussen) 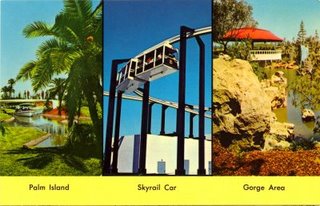 Postcard (Museum of the San Fernando Valley)
They got paid, but by 1979, the beer was more popular than the birds, and so the brewery opted to send the birds packing to various places, including the LA Zoo and to East Coast Busch theme parks, and to pave over the gardens in order to expand their brewing operations. "The announcement came after months of rumors that the bird sanctuary, which drew thousands of tourists annually to the Valley, was destined for closing to facilitate a multi-million dollar expansion of the beer production plant," (Willman). When the amusement park property was demolished, collectors like Helen and Jarvis Luechauer took advantage of the opportunity to furnish their Universal City-area home with all sorts of remnants, "including mahogany staircases, solid oak doors, 25-foot arched windows, enormous chandeliers and artwork," (Frey).

The birds, however, still are thought to "haunt" the Valley. "Reminders of Busch Gardens still fly in the skies above the Valley. Some of the feral parrots and parakeets heard squawking overhead are believed to be progeny of birds that escaped from the park -- or survivors themselves," remarks They Valley Observed. Thousands of wild birds have been spotted in the air all over Los Angeles, from the Valley to the Westside to the San Garbriel Valley, from the 80s through now. "In the Valley, some suspect that the birds are escapees from the old Busch Gardens at the Anheuser-Busch brewery in Van Nuys. Hundreds may have fled private cages, possibly working their way through the bars with their powerful beaks," explains Aaron Curtiss, but notes that experts believe all these birds can't be attributed to just one event, like the closing of the theme park, or any single aviary's destruction.

But many insist that those wild parrots--without a nest in sight--are from the Busch Gardens era. So perhaps what's in the air in Van Nuys at Roscoe and the 405 isn't just the stench of the brewery after all...

The brewery today, on Roscoe (Screenshot via Google Street View)