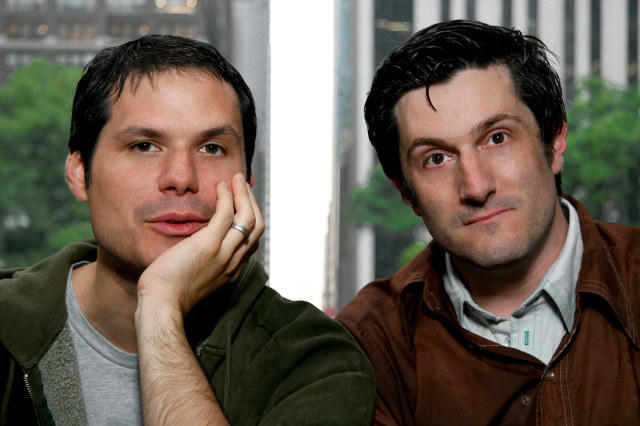 Michael Ian Black and Michael Showalter star in "Michael and Michael Have Issues" which premieres tonight at 10:30 on Comedy Central.

Michael Ian Black and Michael Showalter, the comedy tandem we were first introduced to in the early 90s as members of "The State," a highly influential comedy troupe that has given us some of the funniest and most successful people in comedy writing, acting and directing, are back with their new series, "Michael and Michael Have Issues," which premiers tonight on Comedy Central at 10:30.

Since their time on "The State," the two have gone on to write, act and direct several other successful projects, many of which featured other members of their comedy troupe. Black's credits includes writing and directing, "Wedding Daze," starring Jason Biggs and Isla Fisher, and he also wrote the original version of "Run, Fatboy, Run," starring Simon Pegg which was directed by David Schwimmer. Showalter starred-in, co-wrote and co-produced the feature film, "Wet Hot American Summer," co-wrote a play, "Sex, a.k.a. Wieners and Boobs," and wrote, starred in and directed his feature film debut "The Baxter."

The two Michaels, who previously worked together on another Comedy Central series "Stella" back in 2005, took a little time to give a call to LAist following an appearance at the Butterfinger Comedy Tent at the Bonnaroo Music Festival last month. While the setting wasn't ideal, Black and Showalter were able to quickly talk about their new show, as well as "The State" (which finally became available on DVD yesterday) and vampires, yes vampires.

I'm looking forward to the new show. Tell me a little more about, "Michael and Michael Have Issues."
Black: It's a show about Michael Showalter and myself, Michael Black, making our own sketch comedy show. The show is half stories about our relationship and half sketches from the show.

Will we see other members of "The State" on your show?
Black: Unfortunately, no not this season.

The members of "The State" including both of you guys, have gone on to become very successful. How rewarding is it to see your fellow cast members doing well? How have you all been able to stick together, working and collaborating with each other for so long?
Black: It's very rewarding. Happy to see everyone's doing so well. One of the smart things that we did when we were working on "The State" was we all invested in a stable of carrier pigeons. Those pigeons had babies. Then those babies had babies. Then those babies, we use to communicate with each other. So we've got a very involved carrier pigeon system that crisscrosses the country with little messages rolled up in tubes. That's how we stay in touch and it's really efficient.

"The State" is finally coming out on DVD, why do you think it took so long for this to happen?
Michael Showalter: By the time it actually started to become something people wanted to happen there was no one working at MTV who was there when we made the show that gave a hoot. Finally this guy named Robert Cristiano at MTV kind of made it a priority to get it done. So the reason the DVD is coming out is because of this guy Robert Cristiano and the support of the fans of the show. The DVD's going to have some never-before-seen sketches and commentary.

This question is for Michael Ian Black, in your book, My Custom Van, you wrote a theory of yours that a vampire outbreak would beneficial to the economy. With the popularity of "Twilight" and "True Blood," and a not-so-booming economy, would you say that your theory has been disproven?
Black: No because those are fictional vampires. I don't think we've been able to put my vampire theory to the test because there hasn't been an actual outbreak of vampires. I know it sounds counterintuitive to believe that vampires would actually be good for the economy, but if you read my argument again, you'll see that I'm correct. It's Freakonomics all over again.

Both of you guys are very active online, with your Twitter and viral videos among other things. How important has the Internet been for you guys to build your fanbase?
Black: For comedy, the Internet has been a boom. Showalter just said a godsend. You're able to do stuff on your own and just put it out there and develop your following however you can. You don't have to go through a network, a record label, or a club. There's no filter to get in your way.

Through real-time search on Twitter, I was able to find out that you, Michael Ian Black were just given a new pair of sneakers down there at Bonnaroo.
Black: Yes I was. I'm an open book. I've got nothing to hide except my secret family.

The members of The State, Saturday Night Live and several other sketch comedy troupes tend to continue to collaborate with each other over time. Why do you think sketch comedy has such a family vibe to it? What is it that makes you want to keep working with the same performers?
Showalter: I think it has a lot to do with just common vocabulary, a comfort level with people who you feel have the same sensibility as you do. But on our new show, we're working with a lot of really funny people who we've never worked with before.

Lastly, what can fans expect from the new show?
Black: Hilarity and non-stop guffawing.