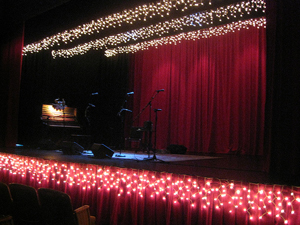 The Largo Stage / Photo by Pneyu via Flickr
Largo at the Coronet has hosted many benefits over the years, and the one this Saturday will feature Largo's first-ever evening of duets, with the proceeds going to St. Jude Children's Research Hospital.

Largo owner Mark Flanagan told LAist that the evening will include a number of duets that Fiona Apple and Jon Brion have been working on, in addition to pairings featuring artists such as John C. Reilly, Tom Brosseau and Mike Viola (who will also be playing the Little Room that night). Flanagan added, "We also have a couple surprises we hope to clinch for the show!"

The benefit begins Saturday, July 18, at 9 p.m. and you'll want to arrive early for some exclusive film content that will play before the concert. Tickets are available by calling 310-855-0350, by visiting the Largo box office, or by purchasing a ticket at the door if the event is not sold out.