Who's Next on Google Transit? A Sampling 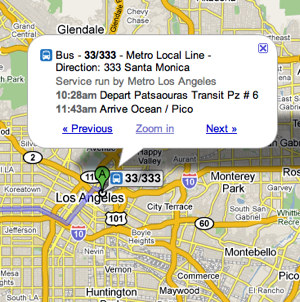 Yesterday was a big day for Los Angeles transportation. Metro, the county's behemoth transit agency, officially announced their partnership with Google. But the county is large and there are various partner agencies throughout. Here's a sampling, with more to come in later days, of where other city transit systems stand with Google Transit:

Los Angeles (LADOT): "Basically, our information, all of it, whether it's DASH or Commuter Express, will be included in whatever Metro provides [to Google]," said Laura Keller of the department's Public Information Office. However, Metro was a bit bemused upon hearing this and could not confirm this fact immediately. UPDATE: Metro is looking into the possibility, but Google wants to pursue individual agreements with every municipal operator.

Culver City: "Culver City is interested in the program," says Art Ida, who manages the city's transit division. "However, we do not have an expected implementation date."

Santa Clarita: The city's Webmaster, Ryan Drake, explains it from a technical side: "It is something we have looked into in the past but due to the way our routes are set up we are not able to provide them with the data they require. However, once we have fully implemented our new Transit Information Network (TIN) we plan on revisiting the application." When Google Transit was gearing up to launch a few years ago, the city had applied to be part of the beta test, but their application did not make it through.

Santa Monica (Big Blue Bus): Yes, hopefully by the end of the calendar year, they said in a comment left on Green LA Girl.