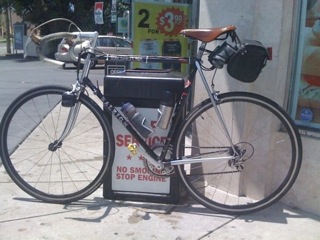 Photo of Bellamy's bike
52 bicycles have been stolen downtown this year so far with one-third of them taken in the area bounded by 5th and 7th Streets, and Figueroa to Hill Streets, according to the LAPD.

Drilling down the analysis further in an advisory, police said "nearly 80% of the downtown stolen bicycles have been taken between noon and midnight; the top days to have a bike stolen are Mondays, Wednesdays, and Fridays. Ten of the 52 stolen bikes were taken from one of two libraries downtown, the Central branch on 5th Street, and the Little Tokyo Branch on 2nd Street."

Earlier this week, one of the stolen bicycles was recovered by undercover police officers. Last week on June 30th, Bruce Bellamy's $1,400 competition racing cycle, locked to a rack, was taken while he was inside a gym working out. Upon reporting the crime to detectives, he gave them a photo of the unique bicycle.

“Mr. Bellamy had done everything correctly,” said Lt. Paul Vernon, head of detectives downtown. “He locked his bike with a quality lock and documented his ownership. What really helped us was his photograph and the fact this bike was unique.”

On Wednesday, two undercover officers allegedly observed Abraham Ramos and his girlfriend, Alejandra Morales, walking a bike down Spring Street. The officers had the picture of Bellamy’s bike in hand and recognized it immediately.

“Turns out, Ramos and Morales re-stole the bike from the back of a tattoo shop on Broadway just a few minutes before the officers saw them,” Vernon said in a statement. “Based on the investigation, we know this couple did not originally steal the bike from Bellamy, but they’re still responsible for stealing the bike, nonetheless.” Ramos and Morales were booked for Grand Theft and their bails were set at $20,000.