Trevor Ariza is Still in LA, Sort of 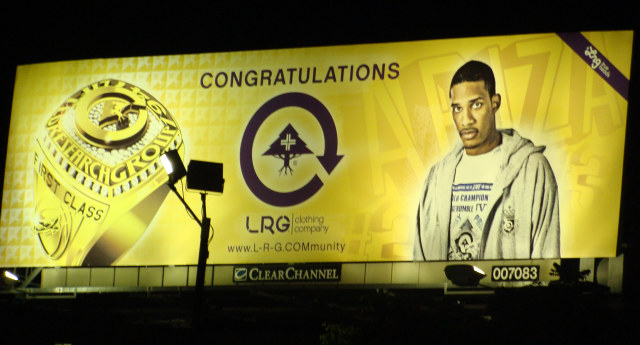 Despite the rumors that circulated yesterday, Trevor Ariza did not end up backing out of his oral agreement with Houston to join LeBron James and Shaquille O'Neal in Cleveland. Today the former Laker made it official signing on the dotted line of his multi-year deal, making him a Rocket.

Just because Ariza is officially no longer a Laker, it doesn't mean that you won't be seeing his pretty face around town anymore. Thanks to the advertising department of the LRG clothing line, you can see the hometown hero in yellow and purple one last time as he graces this billboard at the intersection of Pico and La Cienega. Tough timing.

It was announced back on July 2nd that the free agent forward would walk away from the world champions, committing to a verbal agreement with the Rockets for reportedly slightly more than what the Lakers were willing to give the small-forward who was vital to LA's title run in 2009. LRG's blog announced the billboard honoring their poster boy on June 26th. If only they could have just waited a week, the Orange County-based company could have avoided spending their advertising dollars to congratulate a player who is now being called "greedy" and a "traitor" by many Lakers fans.

It should be noted that the "R" in LRG stands for "research." If they had only done their research, the clothing line would have known that the Westchester High School alum and former UCLA Bruin's future in LA was uncertain. At least for one week the billboard stood as a tribute to a key ingredient to the Lakers success, now it's just an awkward reminder to a betrayed fanbase...and oh right, it's an ad too — check out Trevor's zip hoodie and t-shirt by LRG. Whether you think he's a traitor or not, you have to admit that's a good look.