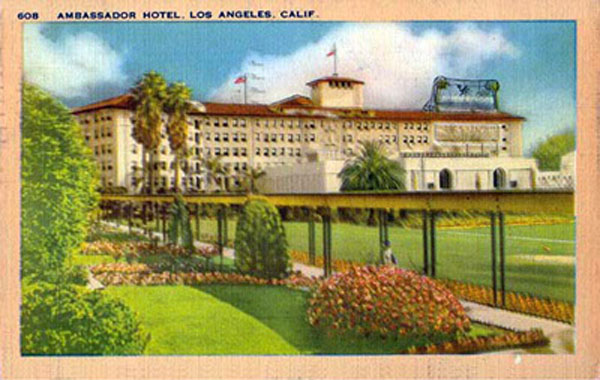 As late as 2005, the Ambassador sat on twenty-four acres of land on Wilshire Boulevard in Koreatown. It was set far back from the street and had the haunted look of old castles. It drew the eye as only someplace ruined, someplace steeped in history can. Blinded, it was worn with crumbling at the edges, bound by a perimeter of chain link fences. It was a fabulous ghost and it could have been a fabulous relic.

The Ambassador Hotel was once the center of Los Angeles style. It was an ode to art deco. In its prime, it housed the fabulous Cocoanut Grove, one of the hippest restaurants in the city. It was the last place where Robert Kennedy walked this earth. Since its closing in 1989, the Ambassador Hotel has lived the mysterious half-life of a movie set to which so many grand buildings in Southern California are reduced.

The Ambassador Hotel was opened on New Year's Day in 1921, in what was then the countryside. Its Spanish revival decor, rife with Italian stone fireplaces and tiled floors, replete with an alabaster fountain glowing in the lobby quickly attracted the jet-set. Even its coffee shop, designed by Paul R. Williams, one of the U.S.'s first pre-eminant African American architects, was a spectacular example of high art deco style, with its rounded white banquettes and swirling bar was one of a kind. 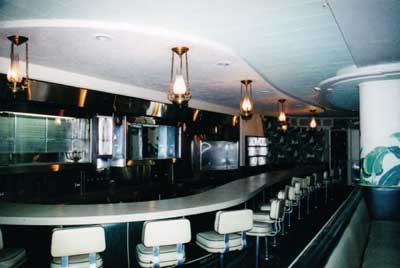 Courtesy of the LA Conservancy.
A number of stars in the thirties kept permanent apartments there, like Howard Hughes, Jean Harlow, Gloria Swanson and a significant number of 20th Century American Presidents. In fact, Nixon wrote his famous "Checkers" speech there (where he claimed that the only gift he had accepted from supporters was a cocker spaniel named Checkers.) Exotic silent movie star Pola Negri was known to walk through the tropical gardens with her cheetah on a leash. Marilyn Monroe was first signed in the Ambassador office of the Blue Book Modeling Agency. There was a time when if you were having a party, you had it at the Ambassador. Everyone from Mickey Mouse to Tallulah Bankhead was feted there. Even through the sixties, it maintained its relevance -- the Charles Manson jury was put up there during the trial.

Without question, the hotel achieved infamy when Robert F. Kennedy was assassinated by Sirhan Sirhan in the kitchen beneath the grand ballroom (with its detailed freezes of charioteers) shortly after giving a speech there in 1968. It was a turning point for the fabulous hotel. The area around it was falling into neglect, and as much as they flocked there at one time, people began staying away in droves. 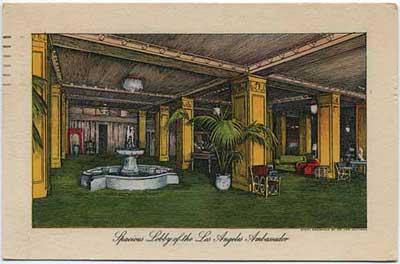 In 1989, the famous hotel closed its doors to the public. It remained a popular movie location, as it was still a paragon of art deco style. One of its more famous roles was in 1967, as the Taft Hotel, where Anne Bancroft and Dustin Hoffman famously canoodled in The Graduate. Other films shot there include Pretty Woman, The Mask, Charlie's Angles 2, Catch Me if You Can, Almost Famous, Forest Gump and Fear and Loathing in Las Vegas. Throughout the nineties, the amenities there were sold off, and the hotel itself was sold to the LAUSD (after a stint being owned by Donald Trump) in 2001.

No one denies that LAUSD needs relief for over crowded classrooms, and it's a great location -- in a part of town that hasn't seen a new classroom built in ten years.
Originally, they were going to use the existing Ambassador structure in a school and housing complex. Over the next few years, LAUSD decided that the building was unsalvageable. After some litigation between LAUSD, various preservationists and Sirhan Sirhan (who wanted the kitchen area to be reexamined for evidence), it was decided that certain portions of the hotel would be spared, including the kitchen where RFK was shot and killed, the Cocoanut Grove and the adjacent Paul Williams coffee shop. However, subsequent surveys have revealed that numerous renovations on the Cocoanut Grove have left it structurally unsound, so it and the coffee shop demolished as well. The pantry where RFK was killed is still in storage, in 29 different boxes.

The Ambassador Hotel died a thousand deaths, one small peace at a time. In an effort to make all this not in vain, The LA Conservancy used the settlement to get LAUSD to agree to preserve historic locations used for schools in the future (the LAUSD will donate $4.9 million dollars to the conservation of other buildings in the area. A small recompense to be sure). Whether or not the gambit worked will be played out in the future. Most of the Ambassador was demolished between the fall of 2005 and January 2006. Friends and fans of the hotel held a a wake for it, across the street at the HMS Bounty on February 2, 2006.