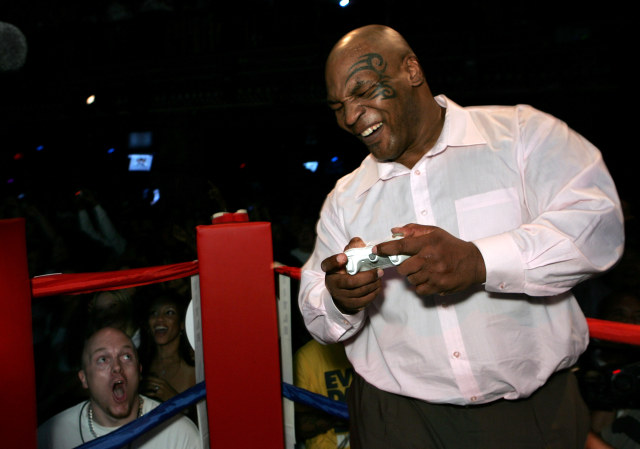 Iron Mike Tyson takes a virtual punch on EA SPORTS “Fight Night Round 4” on Xbox 360 at the House of Blues in Los Angeles Monday night. The game launches June 25.

Mike Tyson is back.

His documentary, Tyson, released in April won over critics and fans alike for it's brutal honesty. Earlier this month, the "Baddest Man on the Planet" was once again on the big screen in the surprise hit of the summer movie season, The Hangover, singing a Phil Collins tune and punching Zach Galifinakis. Today, gamers will find Mike on the shelves at their local retail stores as he graces the cover of EA Sports' Fight Night Round 4 alongside the "Greatest of All Time" Muhammad Ali.

This is the first time the former heavyweight champion has been in a video game since the forgotten "Mike Tyson's Heavyweight Boxing" which was released in 2002. Mike's career is actually similar to Mike's video game career, started out with a classic (Mike Tyson's Punchout), disappeared for a bit, came back with a game most people don't remember and is now back with a bang in Fight Night Round 4. To celebrate his return to the gaming world, XBOX 360 and EA Sports threw a party at the House of Blues Monday night. The guest of honor was none other than Iron Mike.

While the members of the press assembled on the packed red carpet were happy to ask questions to the likes of boxers "Sugar" Shane Mosley and Sergio Mora, the Lakers' Didier Ilunga-Mbenga and Wood Harris from “The Wire,” the real question was, "When's Mike Tyson showing up?"

There was an electricity in the air awaiting his arrival, from not just the camera, microphone, tape recorder wielding dwellers of the red carpet anxious to snag an interview, but from the celebrities as well. As everyone's favorite retired pimp, The Archbishop Don" Magic" Juan told me, "I'm looking forward to partying with Mike." Don, wearing a gold and green suit that featured a picture of himself on the jacket added, "He's going to have himself a good time tonight, he likes to party."

Just moments before the night's events would kick off, Don's good friend Snoop Dogg was, to use a word Tyson enjoys saying, ecstatic to hear the news that he would be playing Fight Night against the former heavyweight champ. Snoop, arguably a legend in his own right, jumped in the air in excitement, and enthusiastically responded to one of the event's organizers with "You for real? I'm fighting Tyson!" 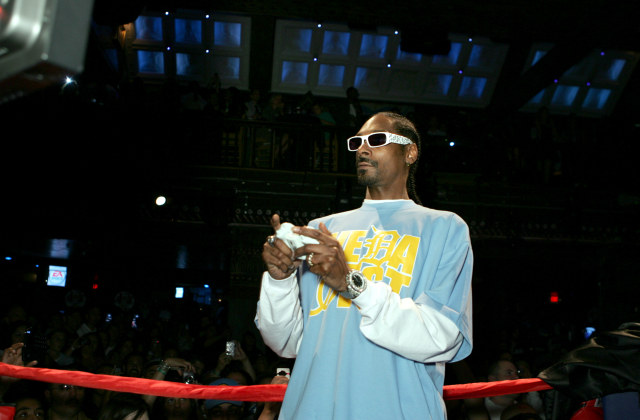 Snoop Dogg steps into the ring with EA SPORTS “Fight Night Round 4” on Xbox 360 at the House of Blues in Los Angeles Monday night. The event benefitted Snoop Dogg’s Youth Football League.

After about an hour of what could be described as the undercard, the main event arrived. While he wasn't wearing his signature black trunks and towel over his head, Mike's walk down the red carpet was electric, nowhere near the electricity of his walks down to the ring, but this was as close as I'd ever get.

As the last person to talk to him before walking inside to enjoy the festivities, I stumbled over my words like a publicist in heels walking down the steep slope that is the HOB parking lot. "Excuse me" said the champ, he couldn't understand me, I don't think I could understand me.

After taking a deep breathe, I took a step forward and just went in for it. Like Michael Spinks, I didn't see any of it coming, but somehow I got Mike to tell me that he owes his current success to "Perseverance and tenacity."

His fight with Snoop, Tyson fighting as Tyson and Snoop fighting as Snoop (he's also in the game) was far more exciting than you'd expect. The virtual Tyson fought a lot like the Tyson who lost to Buster Douglas, took a beating but was able to stick around because he was landing huge punches from time to time. With each monster shot landed on Snoop, the packed crowd would erupt as if we were sitting ringside in Las Vegas. In the end Snoop, a skilled gamer, was just too much for Mike knocking him out in fittingly, Round 4.

Unlike previous Mike Tyson losses, this one did not include quotes like, "Maybe I'll just fade into Bolivian." Luckily for all those present Monday night, myself included, Mike hasn't faded away.