LAPD Questioned About Treatment of Cyclists 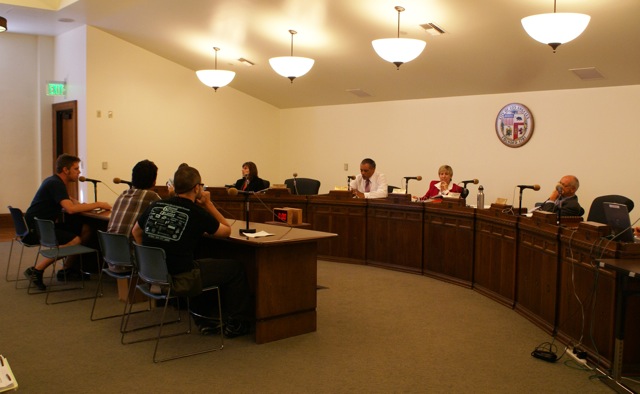 By Danielle Directo, Special to LAist

After being no-shows at last week’s Transportation Committee meeting, LAPD appeared before councilmembers and cyclists yesterday, only to be met by harsh criticism for their “distinct bias towards bicyclists” and their response to a hit-and-run accident in late April in which a Hummer sideswiped a rider in downtown L.A. At the meeting, cyclists were “deeply disappointed” and scoffed at the conflicting details police gave regarding the incident.

Three investigations were conducted after the accident and were sent to the City Attorney, who rejected filing on two of the cases, said Commander Mike Williams and Captain Gregory Allen. However, one case of “alleged vandalism” - in which a bike was allegedly thrown at the Hummer - is still pending, despite the fact that authorities still “cannot determine” the supposed bike-thrower.

“Please help us out…we are citizens, we support L.A.,” said Andres Tena, the hit-and-run victim, to police at the meeting. “Keep us safe, you’re the LAPD…you’re here to protect and serve.”

Advocates also disputed the police’s statement that Tena “bumped into the back” of the Hummer and that the vehicle “stopped one block away” from the collision.

Officers “would have known” whether or not Tena rear-ended the vehicle if they had looked at the bicycle, said Damien Newton who had previously written about the incident at Streetsblog LA. “This should have been very easy to clear up…(Police) should have looked at the bike.”

When cyclists and police disagreed over whether or not the Hummer had a license plate, Councilmember Bill Rosendahl demanded “answers to those questions” from the LAPD “before this comes to Council…I don’t want to go through this again.”

Continuing from last week’s meeting was the repealed bike licensing law, which Williams acknowledged was “an area of concern” and along with notifying officers of the law change, the department is also addressing the issue with a new training program. Later in the meeting, one speaker from West L.A. told councilmembers that roughly a dozen officers he spoke with two weeks ago never “heard about this memo from Chief (William) Bratton” and only three were up-to-date on their bike laws.

The meeting, which was soon-to-be City Controller Wendy Greuel’s last as head of the Transit Committee, also included discussion on possible revenue from new parking meters to fill the city’s budget gap, the reappointment of Board of Transportation Commissioner George Moss, funding for Century City’s new transit management (.pdf), as well as more criticism to LADOT’s Bicycle Plan.