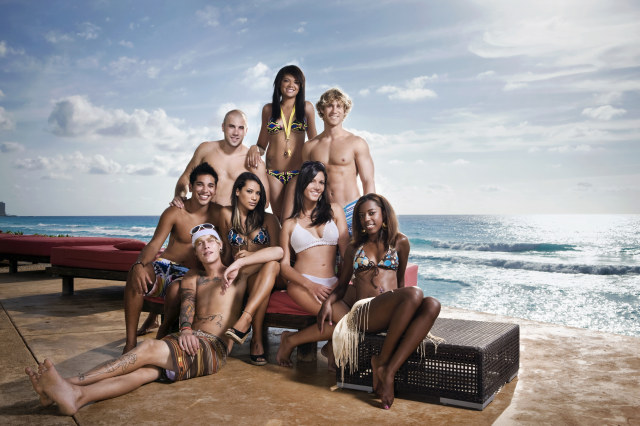 This season "The Real World" is bringing their confessional, cameras and cast of beautiful young people to the booze drenched beaches of Cancun. Tune in to MTV tonight for the season premiere of the network's longest running show, 22 seasons strong. | Photo courtesy of MTV

The true story of seven eight strangers picked to live in a spacious Ikea furnished home for the price of free in exchange for having their every move, mistake and makeout session taped returns tonight at 10 pm. For its 22nd installment, MTV's Real World decided to bring its confessional, cameras and cast of beautiful young people to the booze drenched beaches of Cancun.

While last season, which followed the lives of roommates living in Brooklyn, was filled with firsts for MTV's longest running show; it was the first season to air in High Definition, first season to have eight cast members and the first openly transgender cast member in the show's history, it was void of the usual brand of debauchery that has become a staple of the show's most recent seasons. Was Brooklyn a bad decision? Judging from the drastic move to take the show to a city that knows a thing or two about bad decisions, you'd think so.

To answer that and to give us the scoop on the upcoming season we turn to one of the eight strangers, Ayiiia, a 21 year-old from Chula Vista. Described in her bio as a "reformed party girl" Ayiiia was selected to join the cast by the public, as the winner of the realworldcasting.com contest. LAist had the chance to speak with Ayiiia about being a reformed party girl in the not-so-ideal locale of Cancun, joining the ranks of the Real World alumni, making the move to LA and plenty more. We did not, however, ask who stole all the consonants from her name. 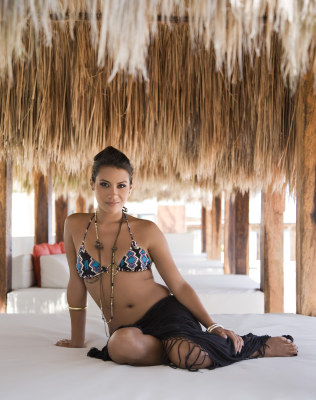 Ayiiia, 21 year old from Chula Vista, is one of the eight strangers picked to live in Cancun. | Photo courtesy of MTV
You probably get this a lot but what's the story behind your name?
I don't know. I have no idea where it comes from. It sounds Hawaiian, right? I just tell people it means "beautiful flower," but I totally made that up.

You were the winner of the realworldcasting.com contest. Things didn't go so well for Greg from the Hollywood season who was the previous winner. Were you worried about the same thing happening to you? Do you feel like the other cast members treated you differently because you didn't go through the same process that they did?
At first, I looked at Greg and thought it sucked how he was represented just through editing and stuff. After stepping into his shoes, as an Internet winner, I think that you are treated differently though. I don't know, I think they (the fellow cast members) leave you out because they think you don't deserve to be there because you got in a different way. I don't know if it's jealousy, I have no idea what it is but you are treated a little differently. It was definitely a little difficult. People automatically just labeled me as the "Internet winner." They treated me a certain way because of that. It was very frustrating at times, which you guys will see. But in the end, it literally all plays out. It was just a difficult process.

Your bio says that you are a "reformed party girl," how big of a challenge was it for you to go to a reality show in Cancun, of all places? Was it difficult to remain the "reformed party girl" in that setting?
It definitely was difficult for me because I am a reformed party girl, or whatever you'd like to call it. I got started at 13. I live in San Diego, I've got Tijuana just 10 minutes away and its 18 to drink there, but really you know you don't need an ID there. By the time I was in high school I was over that. My junior year and senior year I really got into my studies and picked up my life a little. But being in Cancun, that side of me was brought out again. I'm very much the party girl. I don't think I'm over it yet. It was difficult for me because I thought that stage of my life was over.

Last season, Brooklyn, was the first season in a long time where we didn't see any of the roommates hooking up. Do you think MTV brought the show to Cancun to make sure we'd see plenty of that this season?
I think MTV knew exactly what they were doing throwing eight young people in Mexico. The drinking age is 18, it's the number one spring break area. Of course, they knew that there was going to be hook ups and stuff. You're going to have to watch this season to find out what goes on, I can't tell you what happens, but I promise you that we won't let you down.

Brooklyn was a different taste. It was more original "Real World." Lot of the early seasons were a lot like Brooklyn.

People do like watching all the drama, and those people are going to love Cancun. People like to escape from their own lives, so they enjoy watching other people go through drama to feel better about their life. I know I do.

Do you think the drama is a result of the location or the personalities who are in this cast?
I will blame it on the location. Our partying would be a lot different if we were in Texas or Oklahoma. We worked with StudentCity so we meant a lot of spring breakers, lot of college kids who were very happy to party in Cancun.

How excited are you to join the ranks of former Real World and Road Rules cast members? Are you looking forward to getting involved in the RW/RR Challenges?
I am very excited to be around the veterans. The Challenge is something I want to do because I'm very athletic and competitive. Real World and Road Rules cast members they are all one big family. We share the same experience.

So many of the former cast members end up here in LA. What do you think draws them here? Do you plan on making the move up here?
I think being in this industry, TV, LA is the number one spot to go to. I'm definitely moving to LA. It will be easier to get interviews and to start off my future. I want to do the Challenges, but I also want to get into acting and modeling, just like everyone else does.

A friend of mine lived in an apartment building in Beverly Hills where the majority of the tenants were former Real World and Road Rules cast members.
They all have like their own little community out there, right? Definitely looking forward to that.

What's the hardest part about having your entire life taped?
That's exactly it. Having your entire life taped. Literally every emotion, everything you do is taped, all the good and all the bad. Sometimes you regret it, like I wish I hadn't responded that way. In the beginning, the first month, you feel the cameras on you. Every time I cried there's a camera in my face. You get used to it though.

How will this season compare to Las Vegas?
I know that our season is being compared to the Vegas season, and I don't mind that at all. These two places are very well known for partying. I think we might deliver a little more true emotion in our season in the conflicts and situations we go through. People will definitely relate to that. This season will have a little bit of everything.