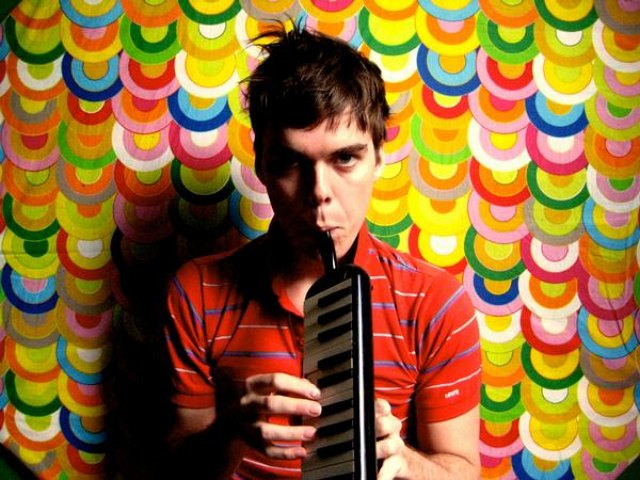 It was all an accident. All he originally wanted to do was start a swimwear line with his girlfriend for kicks. Sean Bones had no intention of forming a reggae-influenced pop band or acting in a film, let alone shouldering the responsibilities of holding down the lead role. In fact he's not entirely sure how it all happened.

One minute he was happily playing with his indie rock band, Sam Champion, in Brooklyn, the next minute he's got a movie, Wah Do Dem, premiering at LAFF and a reggae album dropping in July. How did this side project spiral into a brand new band? We caught up with Sean this weekend to find out.

What made you pick up an instrument? How old were you?
I started playing piano when I was around ten. I did that for like three or four years before I decided it wasn't cool or something. Then I got the rock 'n' roll fever and started playing guitar and stuff. Later I went back to the piano and thought, "God, this is the coolest stuff ever! What was I thinking?"

That's some good stuff. Are you taking a hiatus from your other band Sam Champion?
Well, Sam Champion is on ice for a little bit, but we're not broken up or anything. We're all really active pursuing other projects at the moment. The drummer from Sam Champion plays with me on Rings and he plays with me live. The bass player helped with the production a little bit and Noah's girlfriend sang with me on the record.

It's great that they were so supportive. How did you tell them?
It was kind of awkward for a little bit. I didn't tell them for a long time. It was never supposed to be a side project. I had just recorded two reggae songs on vinyl. They weren't supposed to go anywhere, but then I got approached by a record label at a show and then I got asked to do the movie in Jamaica...and I thought I was going to explode. So I worked up the nerve and just sat them down and said something like, "This is what's happening. I can't come to the CMJ shows with you. I'm the worst." You know, they just looked at me and said, "A. We don't even believe you. And B. If that's true that's sweet." So they were really great about it. 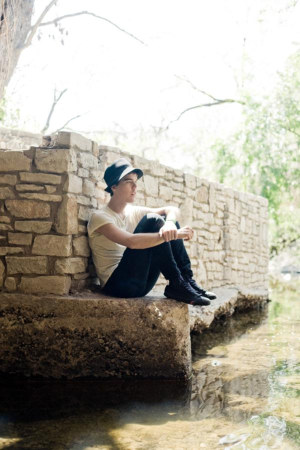 This album is completely different from all of your other music. What made you decide to do a reggae record?
They were just two songs that I recorded one day in my bedroom. It was inspired by this idea that I had with my girlfriend to do a fashion line, which would just be swimsuits. We just decided one day that we'd design these bathing suits and we'll make a reggae album. I think when you've lived in New York City a long time, everybody dreams of living somewhere else for awhile. Some where warmer. I think that's why we started making bathing suits and reggae music.

Was this before or after they asked you to do Wah Do Dem? Was the album inspired by that movie?
No, the movie happened separately. Sam champion did a video with this guy Sam (Fleischner) and he was looking to scout locations for his new movie in New York City. So I drove the crew around because we were friends and played reggae the whole time. I guess that had an effect on him becuase he called me up a month later and said "The movie's going well, but we don't like our lead actor. Do you want to do it?" I had never acted before so I said no, but he convinced me to go have a beer with him in this bar he was scouting in Red Hook. I got there and they were ready for me with this cute girl and a beer and a script. They asked me to read for it, and I guess I did well because they called me the next day and said, "The offer is on the table done. You passed the test." So I put down the phone and started calling people for advice. Thought everyone would say, "No, you shouldn't do this," but instead everyone thought it was awesome. Finally I called the record label. I was sure they were going to say no, but they just said, "We'll get the album later. Peace." So then it was official.

So you tried to get out of it the entire time?
Oh yeah, I was so self conscious about this movie. All they had was a loose outline. I mean, I would totally go on a full week trip and make an experimental film with my friends, but to do this with strangers was a little worrying.

How was working with Norah Jones?
Oh, Norah is totally awesome! She's really great at doing things other than making music.

Did shooting a film in Jamaica change your vision for this reggae record?
I found reconfirmed the vision I had before I went. Although it was funny, The Jamaicans thought it was hilarious that all of the Americans were all listening to Jamaican music from the '60s and '70s, you know this sort of blues reggae. All of the reggae they listened to was from the '80s and forward. They're influenced by completely different stuff. I got really into dancehall music when I was there.

Is that why you chose "Dancehall" as your single?
You know that song doesn't really represent that musical style that well. It's more like the modern style of reggae music. I was really trying to write in a particular style. My record kind of like grows in influence. There's rock steady, ska music, dancehall...really a range of influences. I mean, no matter how hard I tried to make Jamaican roots reggae, coming from where I come from, it wouldn't sound right. But hopefully the record captured some of the spirit of that music.

Why did you choose Rings for your album title?
I used a lot of space echo on the record. It's one of the sweet effects in reggae. Rings is meant to describe that echo. Like a ripple in water when you drop a rock in it, there are rings of an echo that ripple outward in the air, you know? The sound is put through a machine and it ripples out.

Wah Do Dem (what they do) from sam fleischner on Vimeo.

So you're acting debut is happening this month and your first reggae album is coming out next month. Which are you more excited about?
Well I mean, the first thing in my life is music, so I'll say the album. But I'm really excited about both. I don't mean to bash the movie. It's just that movies aren't as natural for me.

What is your favorite thing to do in LA?
Playing shows!

What is the weirdest thing you ever saw in the audience of a show?
People playing snake on their cellphones. It's so weird. I was at SXSW at a Graham Coxon show and there were these girls texting and playing snake in the front row! Man, he's one of my favorites. I couldn't believe it.

If you were booking a band for heaven and a band for hell what would you pick?
Nick Drake would be in Heaven. That guy that never really played shows, but I think he'd do this once. And Hell? Shit. Probably Billy Joel's organ and drum set up...Attila! That's what it was called. Attila would be in hell.

Well thank you so much for talking with us.
Thank you!

Be sure to catch Sean Bones all this week.

June 26 - The Echo with Papercuts and Port O'Brien