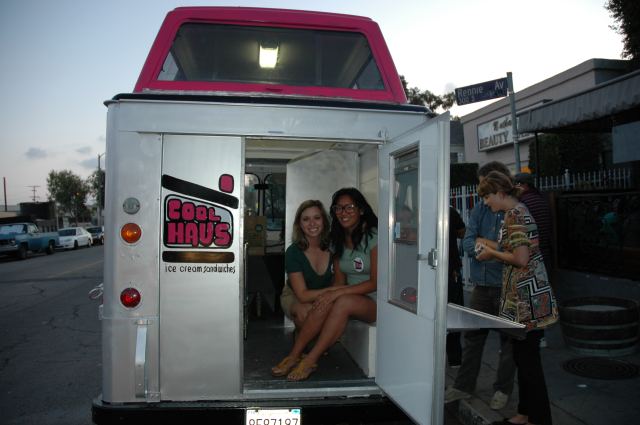 Natasha Case, left, and Freya Estreller (inside the truck) are the minds behind Coolhaus ice cream sandwiches.

Meet Freya Estreller and Natasha Case, the twentysomething women behind the Coolhaus ice cream sandwich brand. You may have already caught them proffering their wares at various events around town — Barnsdall Park, Venice First Fridays, Stories Books — in their pink, chrome-rimmed converted postal jeep. But for those who haven't had the Coolhaus experience, we'll break it down for you.

When Freya and Natasha and their team are out scooping at events, customers can order the sandwiches straight off the menu or mix and match flavors. They also create special flavors for different events like Honeyhock ice cream as an ode to the Hollyhock House, a Neutropolitan and a baked apple sandwich (called the Renzo Apple Piano) that will be sold exclusively at Wurstkuche in the Arts District.

LA's urban sprawl is a perfect market for the mobile food concept. Like the taco truck model, each sandwich off the truck is made to order, and like the Kogi model for meals on wheels, the girls Twitter their location to the growing legions of followers. (It's quite a different experience than chasing the ice cream truck down the street for an overpriced popsicle!) 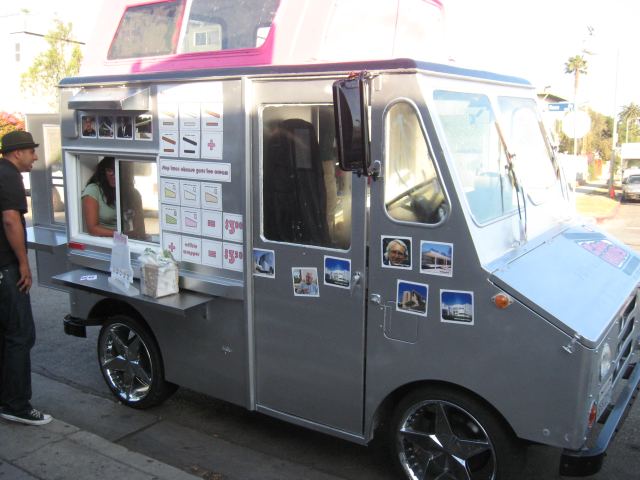 After hatching the idea in their Silverlake apartment last fall, the two roommates moved into the kitchen and started experimenting with a $300 Cuisinart ice cream maker. They beta-tested and tasted throughout the winter and decided to make their first public sandwich-selling appearance at a little event called the Coachella Music and Arts Festival. Perhaps you've heard of it? The thousands of happy campers with munchies was a great trial by fire, so they decided to return the following weekend to sell again at the Stagecoach Music Festival. Since the launch, Estreller and Case have been nonstop with Coolhaus -- Case is even leaving her day job (yes, both work full-time) to dedicate more time to this little-side-project-that-could.

But these two LA natives have put a lot of thought into building their little empire that combines architecture, design, urban planning and food. LAist recently interviewed the duo and found out that the Coolhaus ice cream sandwich line is just the beginning...

>>> How did you decide one day to make ice cream sandwiches?

Freya: Actually Coolhaus is just the first project under the Farchitecture umbrella, so Natasha and myself founded Farchitecture in February of this year, which is shorthand for food + architecture. Our goal with Farchitecture is to basically explore how design can enhance your eating experience, whether it can be through product development, event planning or real estate development. Coolhaus is just the first project. The roots for both Farchitecture and Coolhaus are academic. While Natasha was at UCLA for grad school, she came up with this concept and studied it for an independent study class. While she was at Disney Imagineering there was a craft fair and she also came up with the sandwich and edible wrapper. With that, we were exploring the relationships between food, waste and sustainability.

Natasha: The ice cream sandwiches are a fun way to deconstruct dessert flavors into a new format, i.e. we have a red wine ice cream with chocolate cookie now---the chocolate brings out the blackberry flavors in the wine. This re-working of perception and form is a common architectural exercise in the design process. Also, the stacking of the cookie, ice cream, then cookie offers some opportunity to create architectural type geometries.

Freya: It was just a love of food and architecture, and why not?

Freya: Yeah. They are made out of rice paper and we can actually print on them with soy-based ink. We've done custom wrapper designs for MySpace, Ladies Home Journal, Gourmet, Bon Appetit.

Natasha: The edible wrapping explores this intersection of design and food: re-thinking the functionality and purpose of a wrapper, which we normally throw away without a worry, as edible, is a design choice which is ultimately a move towards limited waste and encouraging sustainable eating/consuming.

>>> What were you doing before Coolhaus came along?

Freya: I'm a real estate developer. I do low-income housing that's green, sustainable and LEED certified. Natasha is an architect. I actually work at Abode Communities, which was formerly the Los Angeles Community Design Center.

Natasha: I have worked in local design offices including Mark Mack Architects, Lehrer Architects, Dagmar Richter Design. I have also worked at Walt Disney Imagineering. I am very excited to be doing Coolhaus full-time in July! 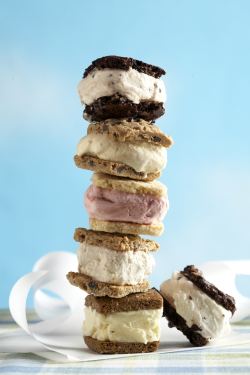 Natasha: The biggest surprise/challenge has been (thankfully, because it is a good problem to have!) how quickly we have grown. We have had to find new ways and techniques of producing larger volume more quickly than we had originally imagined. The truck is booked more frequently at studios, parties, weddings, than we had first imagined...we initially thought we'd have it out on the street roaming from location to location most of the time. Events have proved more efficient and profitable, although we still love roaming the streets!

Freya: We're probably out three to four nights a week and we're going to do the Barnsdall Park/Silverlake Wine tasting every Friday. We're partnering with the Brig and Kogi every Saturday (in Venice) and in between that, it's wherever the events are. It's kind of tough because we have full time jobs. It's like, 'Do I have the energy tonight to go out and sell ice cream sandwiches? Sometimes yes and sometimes no!'

>>> What do you say to those people who thought you were crazy launching a new biz in the midst of the worst recession in decades?

Natasha: I know that some of the most successful businesses are born out of recessions. I think in economically challenging times, we are forced to think more about what our 'job' and career really mean. We can't take a pay check and job for granted---one is forced to think about what kind of contribution he/she is really making to the world around them, and how they can access their audience better and create a real niche that the public will seek out even when their pockets are shallow. I think for an entrepreneur, a recession can actually be a gift!

Freya: Now things cost less and people need something new and exciting and sweet in these hard times!

Freya: Oh just one. For now. It's a converted 1984 postal truck...We bought it off Craigslist in Lancaster and had it towed all the way out here. Then it spent three weeks in East LA. We found guys who worked on taco trucks, ice cream trucks and they totally got the inside permit-ready, souped up the outside. It has chrome rims, but it already came like that from Lancaster. They painted it silver and the camper on top pink and painted our logo on it.

>>> There's an educational component to the ice cream?

Freya: So on our truck we have all the pictures of some of the architects who we've named our sandwiches after...for example the sugar cookie strawberry is Frank Berry, so we have Frank Gehry's mugshot on our truck, so tons of people willl come up to us while they're buying ice cream sandwiches like, 'Who are these people? Birdwatchers?' So it's also bringing this architecture and these architects, these theories and design into the mainstream language.

>>> Where do you see both Coolhaus and Farchitecture going?

Freya: So we're hoping to get a couple more trucks out there. We're looking at Coolhaus New York and Coolhaus San Francisco. And then probably, we're going to start doing edible spoons. We actually know someone who can print out 3D, sugar-based spoons. We can sell these with the ice cream on the truck...all edible, no waste. And also popsicles shaped like skyscrapers or famous buildings. Those are coming up this summer...as soon as Natasha is done with her job and can focus fully on it, we'll be getting them out.

For Farchitecture, the possibilities are sort of endless. We're thinking about real estate development, where the focus is on communal eating areas and edible estates, where there's a communal garden and people can just live off it. We have concepts about partnering with organizations like Fallen Fruit for food- and architecturally related events and product development.