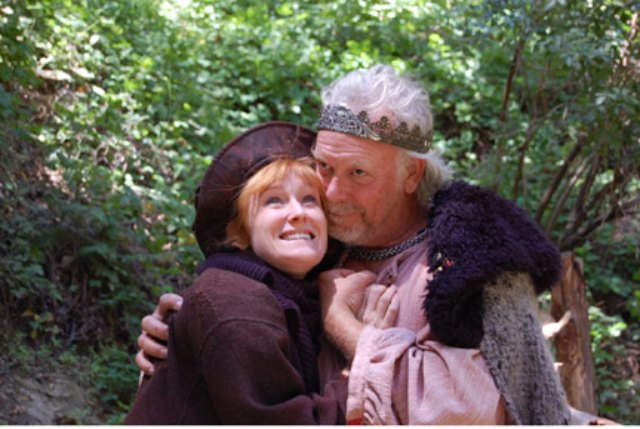 Thirty-minutes before the opening performance of Cymbeline at Theatricum Botanicum, a quartet of Shakespearian carolers serenaded the soon to be audience. Dressed in their classiest tights and mid-century fluffy hats, the vocalists prepared the crowd with enough musical iambic pentameter to properly train their minds for the Bard’s inimitable English.

Birds chirped, actors practiced their sword play and, as the audience meandered toward their seats, the world was transformed into an interactive, Shakespearean show that was two acts of sheer delight.

Theatricum Botanicum is a historical jewel. Set deep in Topanga Canyon, the theater was founded by Will Geer in the 1950’s, following a period of intense strife as a black listed actor during the Red Scare.

The Theatricum of fifty years ago bears little resemblance to today’s digs. Back then, Geer hawked free Shakespeare plays from the road. A rag tag group of friends and actors, like Ford Rainey, John Randolph and Woody Guthrie, joined him on the dirt stage for vigorous performances and inspired grassroots activism, while the audiences sat on railroad ties.

Things have evolved in the last half-century. Audiences today sit bathed in the shade of hulking Oaks and Sycamores on wooden benches, feet from a wooden stage and miles from the din of noisy civilization. Actors routinely break the fourth wall in many performances as they use the whole, 299-seat theater as a stage from which to grab your attention.

Cymbeline was no exception. Actors regularly flooded the stairwell and could be seen making slow entrances through the hills directly behind the main stage - which all contributed to the immensely pleasing and altogether wonderful performance.

Shakespeare’s dramedy of innocence, love, jealousy, war, and toil follows Imogen, an independent and forlorn princess as she pines for her lover Posthumus against her antagonistic father, King Cymbeline, who opposes their union. Banished from the kingdom, Posthumus befriends a camp of Roman soldiers who try to take his mind off his troubles with flowing wine and loose women. The leader of this hedonistic group of ne’er do wells, Iachimo, bets Posthumus that he can tempt Imogen into bed with his cunning wit and Roman ways - a bet Iachimo readily takes.

Things get wild, Iachimo wins, then Imogen thinks her lover is dead, then Iachimo loses because he cheated and they all go to war. Oh yeah, Cymbeline is also revealed to have two illegitimate children (one of whom kills his son at some point) who end up helping him end a war with the Romans. the Queen is a bitch and their son is a nit. 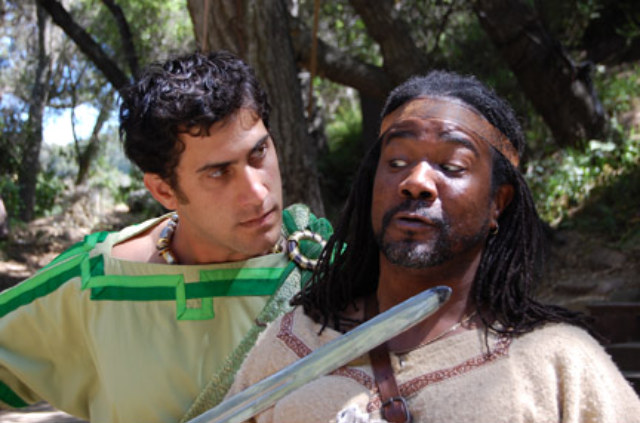 On its merits, Cymebline was never considered to be one of Shakespeare’s grandest achievements. Watching it live, you can see why. Unlike, Hamlet or Macbeth, there is no overarching sense of deep seated emotion that sticks with you in everlasting ways. Unlike A Midsummer’s Nights Dream, there is no rousing and purposeful sense of comedic tom foolery and unlike Romeo and Juliet, this love story falls somewhat flat.

But Cymbeline gets points for amalgamating all genres and Theatricum for putting on one of Shakespeare’s lesser known works. The cast, led by Willow Geer as Imogen and Mike Peebler as Posthumus, struck all the right notes with a golden touch of brevity and soul. Thad Geer, as King Cymbeline, overcame a stiff first couple of scenes to assume a commanding and royal presence while Aaron Hendry’s spot-on portrayal of the sly and duplicitous Iachimo was near perfect.

But Jeff Wiesen, who played Cloten, the clueless and unintentionally comedic song of the king, stole the show. Weisen’s befuddling advances toward his half-sister Imogen would have been nauseating if they weren’t so playfully awkward. His constant and hilarious fiddlings with his sword, mixed in with his fawning entourage, were less examples of his princely might as his lost-at-sea approach to life that kept the crowd in stitches between high drama. Cloten was resolute about most things, wrong about all of them and adventurous when caution would have been optimal, ultimately meeting the wrong end of a sword after engaging a more experienced fighter.

His inspiration might have been a court jester, but it might also have been W., whose brute and ill-headed policies, like Cloten personified, died a violent death as the present tries to exact revenuer against a bloody past.

While it’s too soon to say if there will be a happy ending in the real world, all was well with Cymbeline’s universe.

After finishing off the Romans in rousing Scottish fashion, the king tells declares peace, which all good victors do when there is nothing else to fight over:

"Never was a war did cease,” he tells his people, “Ere bloody hands were washed, with such a peace."

Birds chirped, the audience clapped and the actors disappeared into the woods.

Cymbeline runs through Sept. 27 at the Theatricum Botanicum, 1419 N Topanga Canyon Blvd Topanga. Information on shows at the theater can be found on their website.