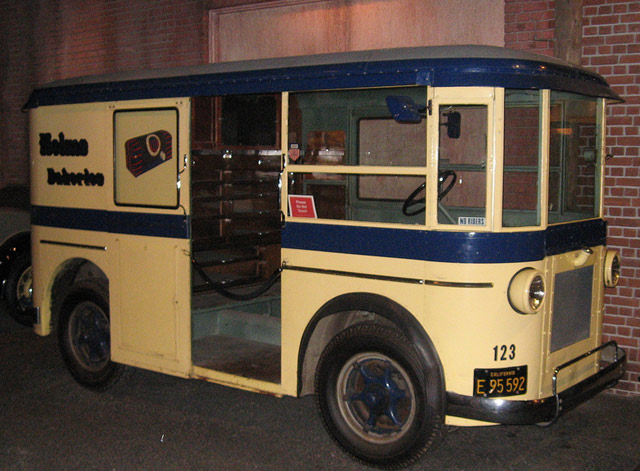 These days we're all a-Twitter about food on wheels. From comforting classics like ice cream novelties to tacos with an Korean twist, we seem to love the idea of finding food on our own two feet and the vendors' four wheels. But before Los Angeles was a tangle of freeways and cars getting food items from a truck was actually a way of life. While some of us may still live in neighborhoods frequented by produce and grocery trucks issuing familiar beckoning musical calls, beeps, and horn toots, once upon a time in L.A. our city's bread and other baked treats could be found driving around SoCal 'hoods in the form of the Helms Bakery Coaches.

In the late 1920s, the temperate climate of Southern California drew many people to migrate from chillier places, and that included Paul Helms, a New Yorker who came out in 1926 to improve his health. He opened up a bakery at the corner of Venice and Washington on March 2, 1931, and had in his employ 32 people...and 11 trucks, called coaches. The building--and Paul Helms' desk itself--actually straddles Culver City and Los Angeles! 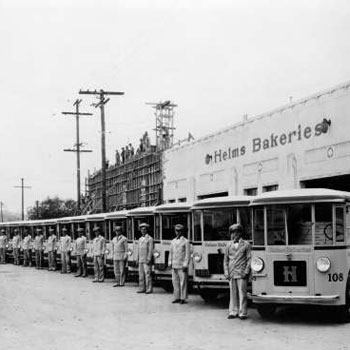 Coaches and Helmsman lined up for duty (Helms Bakery District)
The Helms Bakery motto was "Daily at Your Door"--something pretty remarkable to accomplish in Los Angeles in the pre-freeway era. Helms coaches would begin their daily treks from the Culver City/West Los Angeles location, and eventually a second outpost in Montebello, packing themselves with fresh bread and baked goods early in the morning for drives that could take over an hour to all parts of Southern California, making the journey of course on LA's expanding network of major surface streets.

Every truck had an assigned neighborhood, and as the driver wove his way around his area he would pull twice on the whistle, issuing out what was then a familiar "toot-toot" call. Customers who wanted loaves of fresh baked bread, or to pick from the wooden trays lined with treats like donuts, brownies, cookies, cupcakes and pastries, would emerge from their houses and apartments waving, signaling for the Helms truck to stop so they could make their purchases. Houses who wanted the truck to stop for them would place a a blue placard with an "H" on it in their windows. For many, the bread was bought while it was still warm. On hot days, the drivers would sometimes give away sweet treats like donuts rather than let them go bad and go to waste.

One of Helms' signature products was their Olympic Bread. Helms quickly secured the contract to supply the bread for the 1932 Olympics, held here in Los Angeles, and motor coaches from those early years sported the famous five-ringed Olympic symbol; Helms' affiliation with athletics is legendary, thanks not only to his bread, but his establishment of the Helms Athletic Foundation in 1936 (a museum and library) and the fact that Culver High's football field is named for him. 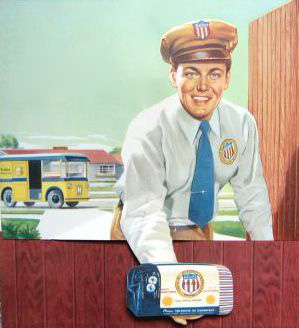 Your friendly Helmsman, at your service ("The Helms Bakery")
Helms drivers, perhaps taking their cues from Paul Helms, who was said to have walked regularly through his bakeries and greeted each worker by their name, knew their neighborhood customers well, and would know the names of their customers--mostly house wives and their children, serving as an integral part of the communities they served. Frank J. Leskovitz recalls the delight of meeting the Helms Bakery Coach man as a child explains how fun it was to get a treat from the truck:

It was so hard to choose! Fortunately, the Helmsman was friendly and helpful [...] The Helmsman wore an official Helms hat, a tie, and a shiny chrome coin changer on his belt. It was such fun to get change! If you were especially lucky, he might give you a cardboard Helms truck.

In 1962 Helms converted their expansive fleet (about 500 that drove around Southern California) of aging coaches to Chevy panel trucks, and continued to make neighborhood deliveries, though Paul Helms himself had died in 1957. The bakery itself closed in 1969; despite having launched a massive campaign to send their Olympic bread to the moon on Apollo II, the fact was Los Angeles wasn't the same, and neither were the shopping habits of its residents. Women weren't home during the day but rather at their jobs, and large chain grocery stores were where busy Angelenos grabbed all their food to take home, including their factory-made plastic-wrapped loaves of bread.

The Helms building, a Zig-Zag Moderne, was named Historic Site No. 9 by Culver City's Historical Society in 1997, and you'll find the bronze statue of a Helmsman at Marina del Rey's Chace Park. The bakery building has since been successfully restored re-purposed for retail and dining and has long had a vibrant new life as the Helms Bakery District. There you can see an example of an original Helms Coach, and there's also one at the Petersen Automotive Museum.

But the bread and baked goodies, the familiar "toot-toot" of the horn, and the kind Helmsman are all gone. (Although you can try to make your own brownies and blondies with these official Helms recipes while listening to some of their commercials!) Former Helms employees still meet annually at a summer picnic, and glinting above the bakery building on the Culver City/Los Angeles line shines Helms Bakery sign, restored in 2003.