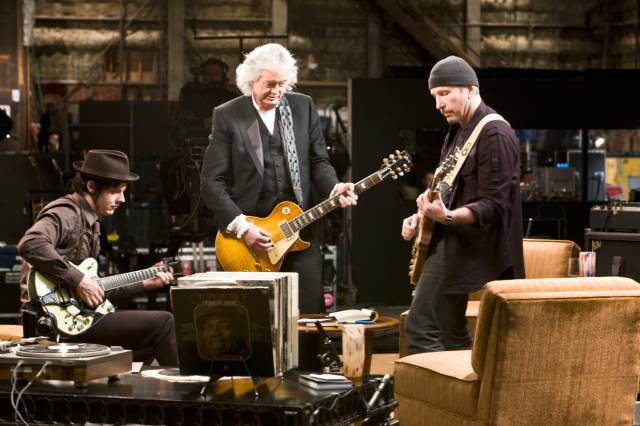 As director Davis Guggenheim remarked in his comments prior to Friday night's LA Film Festival screening of his documentary It Might Get Loud, "I just wanted to make a film about the electric guitar." As rock gods Jack White and Jimmy Page (Jimmy Fucking Page!) confirmed after the screening during an audience Q & A, there really was no plan for the film other than to sit around and talk about music. The result of all this — as Page might say — is a tight but loose film about three men (The Edge being the third), their guitars and their music.

The film is told in four parts. Three episodes serve as a biography for each guitarist. We see archival footage of a thirteen year-old Jimmy Page playing skiffle on British TV with a dorky smile on his face. Shortly after he finishes, the show's host asks him what he wants to do when he grows up and Page shyly responds, "biological research" (which did happen from a certain perspective). His time as an ace session player is covered as is his brief possession of rock's Siege Perilous — lead guitarist of The Yardbirds. 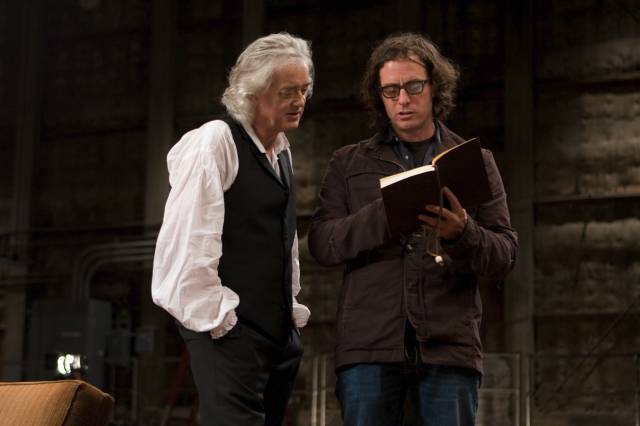 Okay, this is how you play guitar. | Photo courtesy of the Los Angeles Film Festival

Ultimately, of course, we arrive at Led Zeppelin. Guggenheim brings Page back to one of rock's holiest sites -- Headley Grange. We follow Page throughout the main house as he points out where John Bonham's drum kit was set up for the recording of "When the Levee Breaks." We see previously unseen footage of the band hanging around the front yard playing with dogs as they take a break from recording. As a longtime Led Zeppelin devotee, I smiled throughout the old master's recollection of those days long past.

The Edge takes us back to his old primary school where he first met three boys named Paul Hewson, Adam Clayton and Larry Mullens, Jr. We see the music classroom where the boys first learned to play and the elevated outdoor deck where they had their first concert. As Edge relates it, almost bemusedly, he didn't know where to stand on the deck so he just decided to stand to the right of Bono. He's been there ever since. We also travel back to -- of all places -- New York City where the young Irishman bought his first "real" guitar.

The film also introduces us to Edge's massive collection of gear and the obsessive attention he pays to the settings of every single switch and knob. He and his guitar tech fiddle with them over and over again until Edge is satisfied that the sound from the guitar matches the sound in his head. While Edge is a devoutly serious man, some levity is injected into his chapter when he see early -- very early -- footage of U2 from Irish television. Who knew that Bono once channeled Mick Jagger to note perfection?

The high-tech work environment of the Edge is a distinct contrast to the low-fidelity passions of Jack White. The film actually opens with White assembling a guitar out of a piece of wood, some nails and strings and an amplifier. While The White Stripes and Raconteurs revel in loud guitars and heavy distortion, Jack's personal music collection is geared heavily towards the early, pre-1950s blues. We see him delighting in the simple pleasures of playing music that is really nothing more than singing, clapping and stomping one's feet.

All of these stories are intercut with each other and ultimately lead to the fourth part of the film -- the summit. On January 23, 2008 all three guitarists convened in a Warner Brothers soundstage. They brought their guitars and for two days they did little other than discuss and play music. This is the footage that really makes the film. Guggenheim isn't the most propulsive of filmmakers and, as such, the biographical sections of the film succeed more because of their content than Guggenheim's directorial talents.

The summit, though, is just magic. Each of the guys noodle around with their own music, discussing why they did this or that when the wrote the song. Eventually, though, they just start jamming. The pinnacle of the film -- recognized by the festival audience as they burst into applause at its conclusion -- is a wrenching rendition of Zeppelin's "In My Time of Dying." It's here that the personalities of each guitarist suddenly explode. They are all playing the same song but in ways that are both subtle and profoundly different.

Few films deliver legitimate catharsis to an audience, but when Page plays those final few notes of "In My Time of Dying" a huge surge of emotion just empties from your body and a smile can't help but break across your face. When It Might Get Loud reaches theaters later this year, I expect most audiences to break out into the same applause that we did. It truly was an amazing musical moment. From there the film winds down to its conclusion. The gear is put away; the guitarists share a few last words and notes; the concert is over.

For any fan of Led Zeppelin, U2 or The White Stripes this is obviously a must-see film. I'd extend that, though, to any fan of music. The writing of music is usually such a private affair that we rarely see glimpses into the lives of those actually doing it. More to the point, a musician's feelings about music is usually hidden from the public. Aside from seeing these guys play, that's one of the real joys of It Might Get Loud. When Jimmy Page plays, his focus is complete. When he shows off his record collection, however, he can't contain his joy.

It Might Get Loud screens for a final time on Monday at 2 pm at the Landmark Theater. Tickets are $12 and are still available. Don't delay!