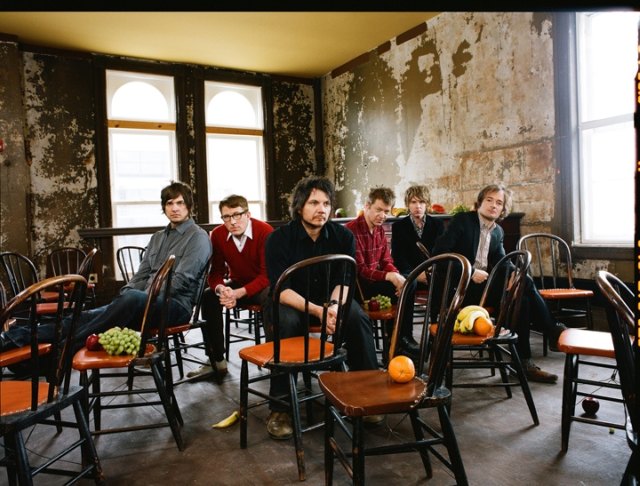 As Wilco prepares to unveil its seventh studio album, the soon to be released "Wilco, (The Album)," the band is barnstorming across the U.S. and world. Earlier this week, I spoke with Wilco's guitar wizard and Los Angeles native Nels Cline from the road, in Oklahoma City. Nels, one of the newest members of the group, splits his time between riffing with Wilco and his own avant-garde jazz band, the Nels Cline Trio. We talked about his two musical worlds, his thoughts on Wilco before he joined the band and the bodily harm he does to himself on stage.

What are your own personal impressions of "Wilco (the Album)"?

I'm very pleased with the new record. By design, it's a different kind of record from "Sky Blue Sky" because [lead singer] Jeff [Tweedy] wanted to put more of himself on this record. As opposed to "Sky Blue Sky" being more of a live record for the most part, there was a lot of playing together, arranging together and writing together [on the new one]. This record is more of a production number in the sense that a lot of the tracks are layered. There's a lot more attention to the flavor in terms of the presentation. They both have a lot of color. I like both records and I like that they are both different.

"Sky Blue Sky" seemed to have a lot of outside influences with Impossible Germany seemingly borrowing from Steely Dan. On "Wilco (The Album)", it almost seems as if you guys are borrowing from yourself. For example, on the opening track, Jeff's repetition of "Wilco, Wilco, Wilco"; sounds like "Nothing, Nothing, Nothing" from "Being There." Did you guys consider Wilco's past history when writing the album?

I would have to say that this is a Jeff record, really more than Sky Blue Sky. Jeff had this body of songs and I can't speak for him with great authority, but I can say that nobody in the band ever thinks about referring to or reflecting upon past work. It's much more of a looking forward kind of thing. I don't think there's any looking back and referring to the past catalog.

You said this is a "Jeff record." How much of an influence did the rest of the band have on this album?

He wrote everything on the record, except for "Deeper Down," which he wrote with [multi-instrumentalist] Pat [Sansone]. So, none. The band arranges everything together...and in this record [Jeff] wanted us to come up with any ideas for the mix. We wanted to see what would happen in the songs and a lot of it was sorted out in the mix. This is an example where Pat, for example, really came to the forefront because he had a lot of arranging ideas and that aspect of it continues to be collaborative.

In the DVD "Ashes of American Flags" the filmmakers chronicled the very tangible physical effects touring has on some members of the band. You, for example, are prone to whiplash on a regular basis from rocking out so hard and [Drummer] Glenn [Kotche] often sufferers from sore and bleeding hands. How much longer do you have to tour?

Well I'm old [haha], let's face it. But this is specific to me. I don't think anyone else in the band - besides Glenn beating the shit out of his hands periodically - is as crotchety as me. I just wrap myself up in it and have for years.

Nels whiplashing Handshake Drugs, from A Ghost is Born in 2007

As head of the Nels Cline Trio, You have had a long career as a jazz and solo performer. When you contribute to Wilco, do you think in your jazz, avant-garde mind, or your rock mind?

Well, I don't want to discount the idea of those two minds, but I don't really think that way when I make music. I really take it on a case by case basis. In the case of Jeff having his songs or anybody else having songs, when they ask me to contribute arrangement ideas or a solo or something, I basically try and do what the song is asking for. I don't think my role is...I don't see myself as [providing] some fancy guitar work, I just want to give something for the song and if I have a solo I'll try and play a good solo. What's interesting to me, is that in soloing in a rock context, I find that my psychical body is in a different place in relation to the instrument and, as such, there is a different brain at work as well. There certainly are a lot of ideas that are related to what you might call the jazz mind...but I find that a lot of songwriters don't really want to hear some fancy guitar work in their rock music, so my role in those situations is almost like some method acting in that I think maybe I assume a personality of somebody [else]. I'm fine with all of that.

But if I'm free improving with someone like Thurston Moore, I'm not thinking in my jazz mind either. And then if I play with horn players, then a lot more linear stuff comes out. There is no method to this, I'm just doing whatever works.

Then I'm guessing there is no substantive difference between performing to a sold-out arena in Oklahoma and 45 people at the Mint in L.A.?

Well, yeah, there isn't much difference, except I move around a lot when I play rock and roll. As far as the concentration, it doesn't really matter.

I hadn't heard that much Wilco, but I liked what I heard. I heard "Yankee Hotel Foxtrot" when I was on tour with Carla Bozulich and my trio, the singers, who were playing her Redhead Stranger tour. We listed to a lot of "Yankee Hotel Foxtrot" on that tour and I really liked that record. And I really hadn't heard most of the other stuff, to be honest. Jeff sent me "A Ghost is Born" and I really liked that. Jeff played some magnificent guitar on that record and I didn't know what the hell I would do.

I dint realize that Carla had all the Wilco records. I was around Carla quite a bit in those years and I don't think I realized she listened to a lot of Wilco. And now I wished I paid more attention (haha).

Now that you're a part of the band, has anything changed in terms of your personal music or your approach to music? Do you see yourself changing the way you play?

Well, let's see. Wow. Tough question to answer succinctly. I'll have to say yeah, there's a lot of things I'm working on musically that are apropos to Wilco's palate that I'd like to get better at. One of those things is a more country influenced style. But also, in terms of playing my own music, it's always difficult to [find a balance]. I don't work as much with my own band as much as I'd like to, but at the same time, it was never a goal of mine to work as much as Wilco worked and play in my own band. Sometimes I wonder if I even like my own music anymore. But we do have a new series of recordings: we have a new studio album and a live album...so there's stuff coming out that makes it look like I still play with them [haha]. But it's all a challenge; everyday is a challenge. I don't think that playing guitar is that easy for me. Everyday I try to hunker down and play the best I can.

Wilco visibly supported Barack Obama during his run for the presidency, appearing on the Colbert Report and performing "I shall be released" with Fleet Foxes. Do you consider Wilco a political band?

I don't think so, not really. You can listen to the record and see we're not writing political songs. I was unable to do the live shows because I was in California at another gig fulfilling my own duties. I would love to have done them, frankly, but no. I think of Wilco as having a fair-minded and intelligent viewpoint to things in general and a concern for fairness and change. But, no. And I'm kind of glad about that. I don't mind political rock and roll, but it can be a little hindering in the long haul.

You were listed on Rolling Stone's list of 20 New Guitar Gods. I'm sure you've received a lot of questions on this, but...

Actually, surprisingly yes. I don't know why I'm surprised by the whole thing, but yeah.

So you were surprised?

Surprised I get asked about it and surprised to be on the list.

So who are your own guitar gods?

Oh, sheesh. There are tons of them. It's very old now, but I have a page on my website with 200 guitarists I've admired n my lifetime. [Nels name quite a few. For brevity's sake, check the link] It's a long list. I love the guitar. I'm endeavoring to record a series of collaborations with my trio, the Nels Cline Trio, and planning to do some recordings with...John Dietrich... and others. I like guitarists.

I have a question here from the website: What should people do if they miss New Music Mondays at the Alligator Lounge ?

[Hahah] Oh my god, what a depressing topic. There were some series' that did spring up at the end up that, but now they're all gone right now. We're in a really dark period right now in Los Angeles for improvisers and sort of uncategorizable instrumental music makers. I don't know what to tell them. My brother [drummer Alex Cline] still has his series at the Eagle Rock Art Center the first Sunday of every month. That's a really good series called Open Gates. Other than that...man, all the good shows have closed up shop. There's still a lot of underground shows going on in Downtown and Echo Park, but I don't know what to say except start a series and I'm sorry I can't be around more.

When Wilco plays in Chicago, I'm sure there's a special feeling Jeff gets by playing in his home town. What's it like for you to play in L.A. and show people your city?

Well, the sad part about showing them Los Angeles is that until this trip, I don't think we've had all that much time for me to show them what I value about Los Angeles. I don't want to get them in dicey neighborhoods and get them saying bad things about L.A., because that's all anyone ever does. We're gonna be around a for a few days next week so maybe I can persuade these guys to try some different things besides West Hollywood. I'm hoping to show them more of L.A. It's a daunting place and unknowable. Having lived there my whole life and my dad being from there and his mom, I'm still discovering places I've never seen. And, of course, I'm gone long enough and half he buildings I member are gone and they build new ones.

That's all the time we have. Thanks for your time Nels.

Wilco is playing four shows in Southern California, starting Saturday night in Pomona and continuing with three at the Wiltern. Unfortunatley, they are all sold out, but there are always deals to be had.