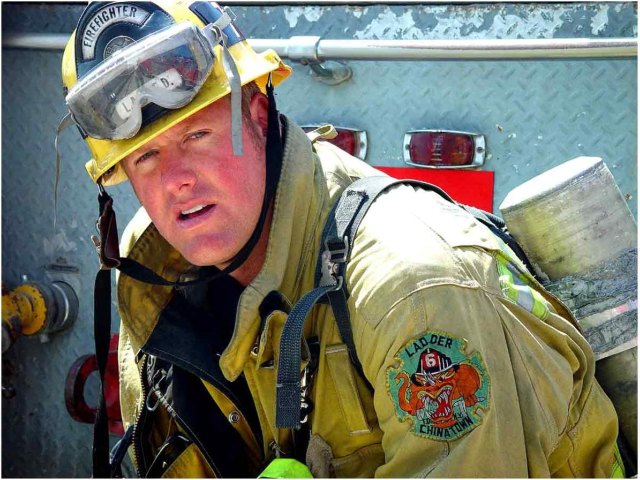 Rob Nowaczyk is an active duty Los Angeles County Firefighter (Station #7 West Hollywood). Throughout his eighteen years of civil service as both a firefighter and paramedic, Rob has responded to the call to help aid and rescue thousands of lives from tragedy.

In addition to being one of LA's bravest, Rob is also the co-founder of Fireman's Brew, a premium micro-brew he and fellow firefighter Ed Walker conceived while battling a brushfire high above the Glendale Mountains. As Rob recalls, "I turned to my partner Ed and said 'damn I’m thirsty' and from there the idea for Fireman’s Brew was born." Rob and Ed had a vision to create a line of premium handcrafted ales that would quench their thirsts after an exhausting day on the fire lines. Originally created by firefighters for firefighters, Fireman’s Brew can now be found in bars, restaurants and grocery stores like Gelson’s and Bristol Farms locations throughout Southern California. Fireman’s Brew donates a percentage of proceeds from every product sold to the National Fallen Firefighters Foundation - a foundation dedicated to serving the families of fallen firefighters nationwide.

Rob, a true hometown American hero, somehow found time in his busy schedule of putting out fires and selling his micro-brew to exchange emails with LAist and answer our seven questions.

1) How difficult is it to manage such a demanding job with your entrepreneurial endeavors? When you first came up with the idea, were you concerned that there wouldn't be enough time in your day to pull it off?
I really don’t ever have days off. If I’m not working at the fire station, I am either working overtime on the helicopter or training with USAR (Urban Search and Rescue). In my free time I help Fireman’s Brew with local beer festivals, deliveries and fund raisers. I always knew and still believe that all our hard work will pay off. 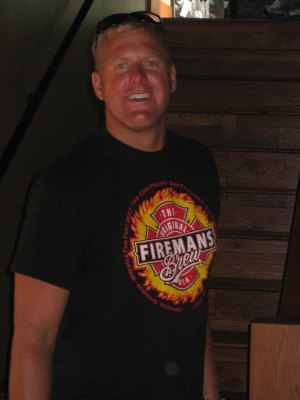 According to Rob Nowaczyk, Los Angeles Firefighter and Co-Founder/Creator of Fireman's Brew, Emergency 51 and Backdraft are the two most accurate portrayals of the life of a firefighter
2) What separates Fireman's Brew from other drinks? What makes it a drink of choice for firemen?
Quality. Fireman’s Brew offers three premium craft beers (Blonde, Brewnette and Redhead) and other products that anyone would enjoy. At the same time, we are raising money for fire fighters across the USA by donating a portion of proceeds to the National Fallen Firefighter Foundation.

3) Do you remember your first fire? Are there any other fires that stick out in your mind?
Firefighters always reflect and talk about the last fire they were on. My first fire was a vehicle fire, one of the tires exploded it scared the crap out of me and knocked my captain to the ground. I will also never forget any of the fires where a human life was lost. You always wonder if there was anything you could have done better that might have saved their lives.

4) What do you think of LAFD's social media efforts? Do you like that Twitter and blogs have given people access to the happenings of the department?
I think it’s exciting and great for loved ones, family and friends to keep up with day-to-day operations of their family members. It is also encouraging and exciting for up and coming new firefighters or anyone else who might be interested in the department.

5) What do you think is the biggest misconception people have about firefighters?
That firefighters sit around all day doing nothing waiting for a fire....we start off by exercising to stay in shape, we train everyday, cook, clean, do fire inspections, check our gear and equipment, do community service and run 911 medical calls in between. We don’t get paid for what we do--we get paid for what we are willing to do.

6) What do you think makes being a firefighter here in LA different from say any other major city in the country?
We are the largest and best fire department in the world. We have an air force of 9 helicopters, are one of only two USAR (Urban Search and Rescue) teams in the United States that are deployed internationally anywhere in the world within hours. Our department started the paramedic, USAR, hazmat and swift water programs that are modeled by other fire departments all over the world.

7b) Do the ladies really like a man in uniform?
I cannot tell a lie -- do women like the uniform? "Absolutely!"