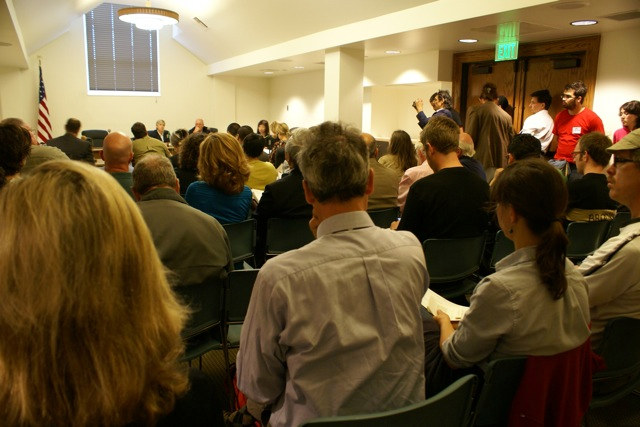 By Danielle Directo, Special to LAist

At the Transportation Committee yesterday, the city presented its Bicycle Plan proposal, which maps potential fixes to L.A.’s streets to make riding easier and safer for cyclists. The verdict? “Flawed,” pretty embarrassing” and an “egregious waste of money” were among some of the comments from bike and community advocates, Sierra Club members and neighborhood councilmembers.

“No matter what people tell you, we are not involved in the process,” said bike activist Stephen Box, who also commented on several other items discussed at the meeting. “I’m calling on you to…call it dead,” he told Transportation Committee Councilmembers Wendy Greuel and Bill Rosendahl.

In addition to including more input from bicyclists who have first-hand experience riding the very streets included in the Bicycle Plan draft, the Department of Transportation’s proposal needed to be “more comprehensive,” said members of the public. The plan, which was released online before the meeting, also drew criticism for not being detailed enough, and speakers said the department wasn’t doing enough to make the proposal more widely available or to reach out to low-income, Spanish-speaking riders without Internet access. The department was also blasted for hiring an outside consultant to draw up the plans at a pretty price.

Greuel advised the committee to schedule another meeting next week and “come back with an outreach plan” to work with the public on the Bicycle Plan.

The LAPD failed to show for the discussion on the recent tensions between cyclists and drivers and the harsh treatment of bike riders by police. "By law, we are required to coexist, by law we are allowed to coexist," said one speaker, a local bike shop owner. "Can't we educate our our security, our police force to protect and to serve, not to persecute?"

Michelle Mowery, LADOT Senior Bike Coordinator, said $7.2 million in state and local funding for bicycle transportation programs is available. "It's there now, we hope it stays there, but we don't know if it will," she said.

Also up for discussion was the recently canned bike licensing law, speed limits and regulations for sidewalk bike riders, how to addressed abandoned bicycles on city-owned bike racks and the potential impact of contracting bike lane maintenance activities. The council made a motion to continue the discussion during next week's meeting.