Seven Questions with Anson Avellar, Producer of 'Is She Really Going Out with Him?' 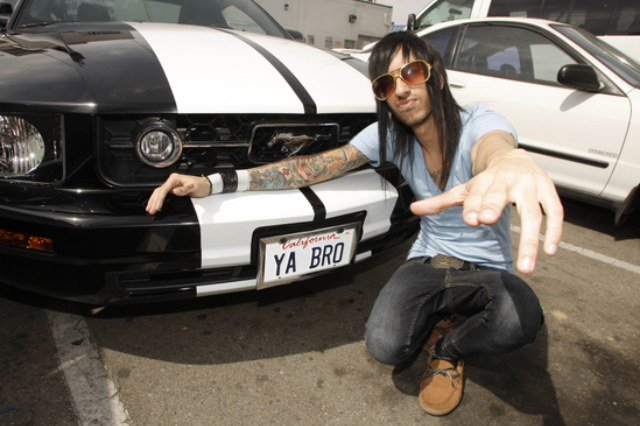 This is not Anson. This is one of the d-bags who is featured in the new show "Is She Really Going Out with Him?" which is produced by Anson and premieres today on MTV at 5:30 p.m.

Anson is a veteran of the entertainment industry who was previously a development executive at Paramount and is currently a producer at a production company under Dreamworks. The Hollywood resident recently linked up with Jay Louis aka Douchebag1 (read LAist's interview with Jay) to bring the online phenomenon that is HotChicksWithDouchebags.com to your TVs with the hilarious new MTV show "Is She Really Going Out with Him?" which premieres today at 5:30 p.m. In the words of Jay, "HCwDB goes televisual, bitches."

Anson took time out from his busy schedule to exchange emails with LAist to talk about the new show.

Anson Avellar, producer of "Is She Really Going Out with Him?" the new MTV show that brings HotChicksWithDouchebags.com to your TVs.
1) What gave you the idea to approach Jay Louis, the creator of
HotChicksWithDouchebags.com, about turning his blog into a TV show?
I was initially struck by Jay's voice and the juxtaposition of high brow literary references with pop-culture colloquialisms. That is what is so potent about Jay's writing style; his blog could be enjoyed by the likes of Philip Roth or our premiere D-Bag, Tommy Gatewood. It was obvious to me that Jay had a unique ability to pin point and skewer the pandemic of arrested development with men in our society today. I felt compelled to convince Jay to expose this crisis to a larger audience. A show on MTV felt like a great way to start spreading the message.

2) Does "Is She Really Going Out With Him" say something about society?
Yes, our society is in a state of crisis, which in the book "Men To Boys," Gary Cross calls "modern immaturity". We have become a society that embraces commercial culture and lives on for the now. Men today are not meeting the financial and social obligations of generations before them. They think that maturity marks the end of having fun. Although a bit of an absurd film, IDIOCRACY was a brutally honest view of our commercial culture going unchecked. Imagine a future of youth that been brought up by the douchebags that came before them. "I weep for the future" - FERRIS BUELLER'S DAY OFF.

3) How hard was it to find these D-bags? Why would these guys want to be on the show?
We learned pretty early on that there is an abundance of D-Bags throughout our country. However, most of the hotties who love these guys are so far gone, they don't see anything wrong with their style or behavior. We often wondered if these hotties could be saved. Our casting director did an amazing job at find douchebags who were dating strong, smart and beautiful girls who were starting to question their relationship. To be honest, the 'Bags didn't know that they were going to be mocked on our show. Most were so oblivious to their ridiculous behavior that it made for great TV. Many of them are club promoters or DJs and they were hoping to use this show to self-promote. They are in for a huge surprise. In my mind, the few guys who were in on the joke are even bigger douches.

4) Obvious MTV archetypes aside, are there any couples fact or fictional who embody the "Is She Really Going Out With Him" couple?
The first one that always comes to mind is the coupling of Megan Fox and Brian Austin Green. Seriously, you can't get hotter than her or douchier than "David Silver" from 90210.

5a) The first episode's D-bag, Tommy "the OC Bag" talks about himself in 3rd person. Have you ever gone 3rd person?
Anson would never do that; he's way too cool.

5b) How does Tommy stack up to the rest of the D-bags who will be featured on the show?
Tommy will always have a very special place in my heart. However, in each episode we explore a different strain of douche, from the "Fashionista Bag who designs Ed Hardy knock-offs to the "Werebag" who can't control his inner douche once the club music starts bumping. They are all very special. Picking one is like asking me to pick my favorite child.

5c) Who is your all-time favorite douchebag?
It's so hard to just pick one. In each episode of "Is She Really Going Out With Him", we compare our resident D-Bag to three celebrity-bags of the same ilk. My favorite comparison is Samantha Ronson to the "Federbag", who shamelessly freeloads off of his hottie.

6) As a studio exec you oversaw movies like Reno 911 Miami, now you produced this. You've exposed cops and douchebags - are you trying to make the world a better place, one absurd expose at a time? What's next?
Yes, I see myself as the Harriet Tubman of enslaved hotties everywhere. I'm currently developing a number of feature projects including an action film about a former secret service agent that has Len Wiseman (LIVE FREE OR DIE HARD, UNDERWORLD) attached to direct.

7) If you can convert one d-bag from his douchey ways will you consider this show a success?
No. If I make a shit load of money, I'll consider it a success.