Map: Where the Mountain Lions Live in the Santa Monica Mountains 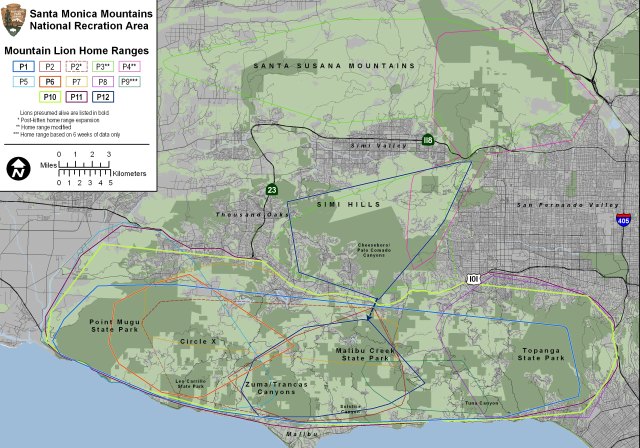 Since 2002, the National Park Service has been tracking Mountain Lions in the Santa Monica Mountains, studying their movements, pinpointing their ranges and observing how human development impacts their population. Twelve have been tracked in that time with some remarkable finds.

In March, one tagged and collared in the Simi Hills last December made his way across the 101 freeway in the Liberty Canyon area, causing excitement through the Park Service. This was big news for Wildlife Ecologist Seth Riley, who is in charge of tracking them because it was the first time since the program began that one had crossed the 101 Freeway. Unlike the 118 Freeway between the Simi Hills and Santa Susana Mountains, where they can cross with ease via a tunnel for hikers, the 101 provides no such linkage.

"This is an area we've been concerned about for a long time," explained Riley of LIberty Canyon. "It is the last place along the 101 where there's natural habibat on both sides of the freeway, the last place with effective wildlife activity."

Basically, if strip malls and housing tracts were to come to the area, it could be devastating to the ecosystem. Broadscale connectivity is important for species and habitat, especially in light of climate change, which can prompt ranges for animals and plants to shift. If they can't shift, there's a potential for extinction at the local level and sometimes across the board as with the threat to Joshua Trees. 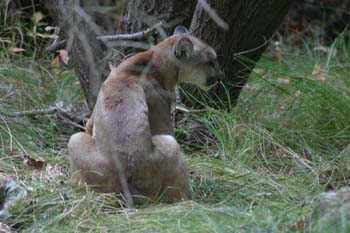 Photo courtesy of the National Park Service
Even with the development now, the Santa Monica Mountains, Simi Hills and Santa Susana Mountains are not big enough for the estimated seven lions--some tracked by collars, some not--living among them. Depending on their sex, ranges should be 150 to 400 square kilometers, mostly independent of each other, but in the Santa Monicas it is not surprising to see them overlapping, which has its own effects including fights to the death over territories and a potentially lower food supply.

The technology used to track the lions is improving fast. Today, the collars send GPS signals to a satellite that are downloaded at park headquarters in Thousand Oaks. They get a handful of locations every 24 hours, one during the day and one every two hours at night, when they are most active. But the more pings they get, the faster the batteries die.

"Getting animals and changing collars is not a simple task," said Ray Sauvajot, Chief of Planning, Science and Resource Management for the Recreation Area. If a collar change is needed, rangers try to use a back up VHF signal on the collar and traps set in remote locations are checked daily.

The tracking of each cat tells a different story, although their lives are all intertwined. Here's a break down of each:

P1: For all purposes, he's the king of the mountain and happened to be the first tagged Mountain Lion in the mountains. He mated with P2, who gave birth to four cubs (P5, 6, 7 and 8) back in 2004. He was thought to be dead back in March of this year after a bloody fight with an non-collared lion, but scientists a couple weeks later matched fresh scat to him through DNA, proving he survived the fight. They say he is likely to be still living.

P2: Although she gave birth to P1's four children, he killed her in August of 2005. Biologist Jeff Sikich actually aurally witnessed this, unsure if it was fighting or mating. He knew one thing was for sure at the moment, the cubs were present for it and he even saw one run away as it crossed the road where his truck was parked. "That's pretty unusual actually," explained Riley. "Mountain lions kill each other pretty regularly and occasionally males kill females, but no one has ever heard of males killing females that they had previosly mated with." Riley guesses that she may have been defending the children as it is commonplace for a father and son to fight over their territory. The fight lasted around 45 minutes.

P3: He lived north of the 101 freeway roaming the Simi Hills and crossing the 118 freeway to the Santa Susana Mountains. But anticoagulants got the best of him. It is not known exactly under what conditions the compounds built up in the system, but Riley has his theories. While mountains lions' main food source are anticoagulant-free deer, rodents and coyotes are known to carry the compounds in their systems. Rodents get it directly through poisons and coyotes eat those rodents, building up a storage of the chemicals in their liver over time. Now, if a mountain lion comes by and eats the coyote, taking in the liver full of anticoagulants, that high one-time dose could be fatal. Both the coyotes and lions seem to live with smaller doses building up in their liver. 85% of coyotes and all but one of the mountain lions studied after death in the Santa Monica Mountains have evidence of the chemicals in their system, but only two have died because of it, including P3.

P4: Like P3, she lived in the Simi Hills and Santa Susana Mountains and died of anticoagulants. The National Park Service is collaborating across the state with other agencies on this issue because there is very little research about the affect of these chemicals on the animals, but they are finding that exposure is extremely widespread.

P5: One of four children of P1 and P2, he grew up, staying with his mother until her death. On his own, he claimed a territory on the west end of the mountains, some of it slightly outside of his father's area. Unfortunately, in September of 2006, he saw his territorial father again with fatal results. 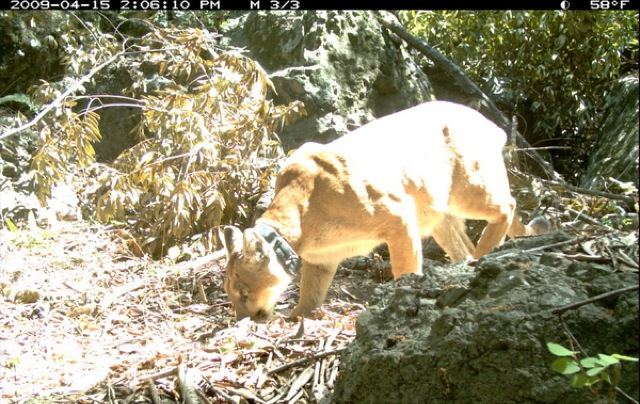 P6: She also lives in the west end of the mountains within her brother's territory. Like the rest of her siblings, tracking collars were put on when they were young, but her collar died prematurely. It was until last April that a remote wildlife motion sensor camera snapped a shot of her alive and well (photo above).

P7: Like her brother, P5, she was also killed by the father, P1, in June of 2006. It is believed it may have been over food and was actually witnessed by a rock climber in Malibu Creek State Park.

P8: The last of the siblings, this male claimed his territory on the east of the mountains before the 405 freeway. In September of 2006, he was also killed at the claws of a mountain lion, but not P1, his father, but one that was not being tracked. Then photos of this untracked lion popped up on the wildlife cameras and he was eventually captured and named P9 in May of 2007. DNA evidence proved he killed P8.

P9: the collar malfunctioned quickly, only 6 weeks worth of data. malfunctioned in an interesting way, collected data every minute, but that data is really interesting, really detailed movement data, where he's using trails, crossing roads. turns out he killed a young 5 or 6 month old (P-B) in malibu creek in winter of 07 before capture. lost signal, got hit in late summer 2007 on malibu canyon road during rush hour and died. P-A was also hit on malibu canyon road, not far from where P9 was killed. other lions have cross a ton of times. P-C killed on 118 in rocky peak area last october. P-D killed on the 5 at calgrove, P-E killed on 405 on may 26th, driving southbound to UCLA, saw this thing on the road, looked like it was run over a few times.

P10: Caught in February of 2008, this guy has taken full range of the mountains and is still alive. It is likely he's a sibling of P11, but it is unknown who their mother is, meaning another female lion lived or is living in the mountains untracked.

P11: Also caught in a trap in February of 2008, the collar signal died prematurely and his status is currently unknown. Genetic similarities between P11 and P10 indicate they may be siblings, but it's not as easy with these mountain lions. "The genetic similarity of all of our lions makes these things harder to determine than they might otherwise be," Riley said pointing to, once again, P1, as the potential father with an unknown mother.

P12: Just caught last December in the Simi Hills, he was the one who had Riley and others excited when he crossed the 101 freeway last March. Currently, he remains in the Santa Monica Mountains.

Still counting? By all counts, it appears there could be up to seven mountain lions living in the mountains. P1, 6, 10 and 12 are being tracked or leaving evidence and P11 is suspected to be out there. And then there are at least two without collars found on cameras. 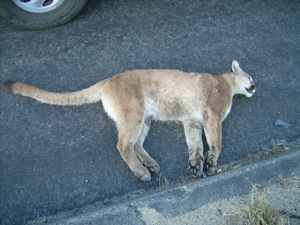 A young lion found dead on the 5 Freeway | Photo courtesy of the Mountains Recreation & Conservation Authority
What about the non-collared? As recently as just a couple weeks ago, a dead mountain lion was found off the 405 freeway's southbound lanes. And a few weeks prior to that, another was killed on the 5 freeway in the Newhall Pass. They were named P-D and P-E, respectively. In the past years, two other untracked lions were killed on Malibu Canyon Road.

The future? The National Park Service will continue to track and study the mountain lions. As for humans, there have been no significant interactions. "In my 18 years as a National Park Ranger in the Santa Monica Mountains, I have yet to see one in the wild," wrote Woody Smeck, the Superintendent of National Recreation Area, in a comment on LAist.

Mountain lions tend to stay away from humans, but there is fear that the continuing human development into and around the mountains in Los Angeles and Ventura counties will leave lions with less livable space and less deer--their main source of food--which means more mountain lion interactions with humans and the eventual demise of them in the area. Kari Kiser, Sr. Program Coordinator with the National Parks Conservation Association, couldn't agree more. "Because of the amount of land needed to survive, we need to protect that and provide connectivity."